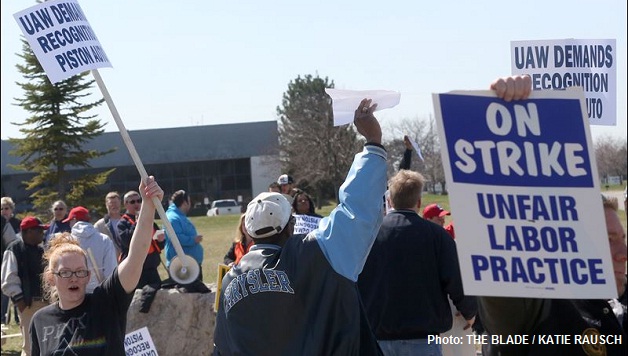 by Karl Belin in Pittsburgh

Workers at Piston Automotive, a Jeep parts supplier in Toledo, OH, have won a resounding victory that will strike a chord with all workers struggling to organize their workplaces or thinking about doing so. On Thursday, April 17, workers shut down production at their company, effectively halting the production of the new Jeep Cherokee across town at the Chrysler plant. The immense pressure they put on the bosses caused such chaos in the auto industry that the company was forced to recognize the union in a single day. Prompted by the defeat of the organizing efforts of the United Auto Workers (UAW) at Volkswagen earlier this year, the victory in Toledo indicates a return to the militant class struggle approach of the past to win battles now and in the future.

Workers at Piston reported to Labor Notes that 75-80 percent had signed cards to join the union in the organizing campaign. This was the result of the terrible conditions in the plant. Workers were forced to work through meals and breaks, take mandatory overtime, and suffered intimidation from management. Wage theft was rampant in the plant, with those working overtime being released from duty 12 minutes after the hour instead of 15, when they would receive another hour’s overtime pay. Meanwhile, experienced, semi-skilled workers were making only $12.55 per hour or less.

As UAW Region 2B Director Ken Lortz told Toledo News Now, “Over two months ago, the workers at this worksite showed an overwhelming support and interest in joining the UAW. They signed authorization cards; we approached the employer asking for recognition, and they refused to do so.” The company’s refusal to recognize the union is familiar and expected to all workers and socialists in the labor movement. The bosses will do everything in their power to disrupt and destroy workers’ organizing efforts. An example of this is the fact that Piston Automotive asked the UAW to throw away the first round of cards signed and get workers to resign, alleging that workers in the plant didn’t know what they were signing the first time. The union refused.

Anti-union campaigns are made easier when the company is given some breathing space. This breathing space is usually found in the time leading up to a National Labor Relations Board election, which is the common “next step” for unions after non-recognition. Workers and organizers took a different approach in Toledo on April 17. Instead of accepting non-recognition of the union and asking for an NLRB election, the brave workers decided to strike.

Because industry in the United States often works on a “just-in-time” basis, where materials and parts filter into factories and plants as needed, the strike was devastating to the Jeep plant across town. Only the overnight shipments were available to the Jeep line, which stuttered and then eventually stopped.

As Jane Slaughter of Labor Notes explains, bringing Jeep to a halt was the keystone to the plan:

“[A striker] said the plant manager gave a speech inside the plant, threatening workers with points on their record or loss of holiday pay, and warning them that a walkout would shut Jeep down—but at 9 a.m. they all walked out anyway.

“Shutting Jeep down was the plan, after all. They had earlier been briefed by UAW reps on the strategy: affect production of the lucrative Jeep so that Jeep will pressure its supplier to recognize the union.”

Compared to the blow of losing the union drive at Volkswagen in Chattanooga, Tennesse, the Toledo victory has the potential to re-inflate the sails of industrial organizing. As we in Socialist Alternative have pointed out before, it was the labor-management partnership approach of the UAW leadership in Tennessee and nationally which led VW workers in the state to report that they were distrustful of the union’s leadership. This conciliatory attitude was so overt that the UAW website openly used the slogan “Putting Collaboration First!”

The struggle in Toledo seems to have been of an entirely different character. More details will become available with time, but it seems that there was much more local and regional control over the campaign. This resulted in a majority walkout on Thursday and the solidarity shown by the workers was enough to weld together a strong and cohesive strike.

They key to Toledo was consciousness – the understanding that management was opposed to the union and would do anything necessary to stop it coming into the plant. That clear understanding of the class forces at play in the struggle made it possible for the workers to use the most powerful weapon at their disposal: militant strike action. By seeing the clear dividing line between themselves and the bosses, workers were under no illusion that collaboration would “get the goods.” Exactly the opposite! By striking, workers have drawn the most important lesson of all. That is, the plant (and the industry!) doesn’t run without them and that they can only depend on one another. It was this class clarity and unshakeable unity that won these workers a union in eight short hours.

The Once and Future Labor Movement

Fittingly, the struggle in Toledo takes place during the 80th anniversary or another historic class battle in that city, the Toledo Auto-Lite Strike. This was part of a wave of militant organizing drives and general strikes across the U.S. in 1934, which are rich with lessons for socialists and workers today.

The Auto-Lite strike, like the general strikes in Minneapolis and San Francisco the same year, had an important characteristic which made them different from large class battles before and after. All of these struggles were led by revolutionaries and those who identified themselves as socialists. San Francisco dock workers were led by the Communist Party. In Minneapolis, the fledgling Teamsters local was led by the Communist League of America (later called the Socialist Workers Party), which established the Trotskyist tradition which Socialist Alternative is part of today. The Toledo workers were led by the American Workers’ Party, whose leader was Rev. A.J. Muste.

In all of these struggles, workers boldly went on the offensive to demand union recognition, higher pay, benefits, and dignity at work. Even at the height of the Great Depression, these workers took a bold, class struggle approach to fight for their demands. They were met with the full repression of the bosses and the state, with hired gun thugs and then the National Guard being called out to crush the movement.

The militancy of 1934 is as needed today as it was then. This has been confirmed by the positive example of Piston Automotive, and by the negative example of Volkswagen. Ultimately, the lessons of the past will need to be relearned by large sections of the working class by trial and error. For socialists, we must continue to build our forces and recruit from the ranks of militant workers drawing important conclusions, so that we can again play the role we did in 1934 and beyond.