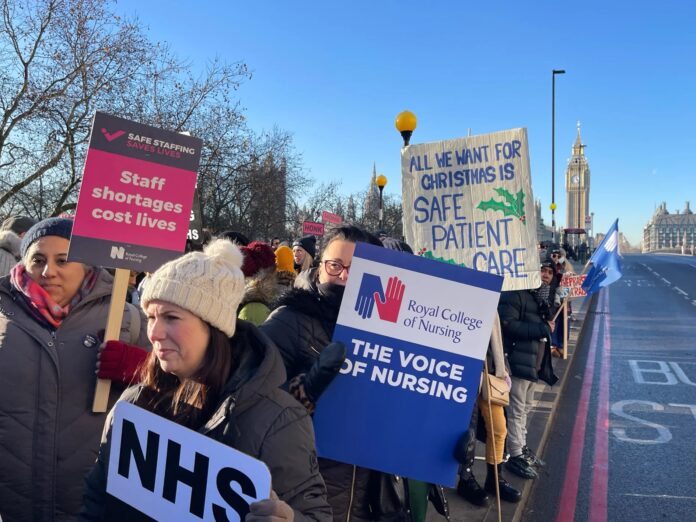 Everyday in the United Kingdom another headline appears with a new strike being announced. Going into December, the country is facing the biggest strike wave since 1989. There is the possibility that by Christmas up to 1.5 million workers will be on strike. The last time that many workers were on strike in the UK at the same time was the General Strike of 1926 which posed the question of overturning capitalism and the working class seizing power. Unfortunately, this  is not the same situation but does represent a new era for the trade union movement in the UK. International Socialist Alternative has been at the forefront of arguing the need for increasing coordination between different strikes and increasing the number of strike days as part of building a movement for a general strike – which up to now the Trades Union Congress (UK equivalent to the AFL-CIO) has refused to call.

As in many other countries, the cost of living crisis is hitting working class people in the UK like a bomb. By October 2022, inflation in the country hit 11.1% – a 41 year high. The energy crisis in particular has forced millions into the cold, as December saw record high energy prices (and corporate profits!) while much of the country has faced below freezing temperatures. As of November, food prices had risen 12.4%.

At the same time, the ruling Tory Party, headed by a Prime Minister worth roughly $845 million in personal wealth, has done nothing to alleviate the hardship faced by millions of working class families. The leader of the supposed “opposition” Labour Party, Keir Starmer, instead of standing with working people, has repeatedly denounced workers actions in response to the cost of living crisis. In July, Starmer banned party shadow ministers from joining picket lines and joined the right-wing Tories in opposing the unions’ demands for pay raises especially among healthcare workers. Many of these workers are the same people that kept the country running during the COVID crisis including health workers, transit workers, teachers, and many more.

Seen as the only force fighting back against the dire situation, public support for the strikes has continued to be high. In the wake of the Royal College of Nurses (the union representing the majority of National Health Service nurses) announcement of its first strike in its 106 year history in the run up to Christmas, a majority of Britons support their right to do so.

For the rail workers in the RMT and ASLEF unions, which along with the strikes by postal workers have been seen as the kind of “vanguard” of the strike movement, support levels remain high despite the personal impact these transit strikes have for many people. The level of working class solidarity, even among workers not involved in strike actions or trade unions, is underlined by the enthusiasm for the broad cost of living campaign launched by the RMT and the Communication Workers Union called “Enough is Enough” which has brought out hundreds of thousands at rallies and public events across England, Wales, and Scotland, much of which has been aimed at building support for the striking workers.

For historic reasons, the trade unions in the UK are much more of a feature in society than they are in the U.S. As of 2020, just under 25% of all workers were in a union (the number goes to over 50% in the public sector) and the number has been climbing over the last several years. However, like in the U.S., the last several decades have seen a general assault on trade unions from the capitalist establishment and a general failure to fight back to the degree necessary by the majority of union leaders, paving the way for the success of neoliberal austerity in the country.

The effect of this on the trade unions in particular has been a halving of union membership since 1979, the political party originally set up by unions – the Labour Party – being gutted of real control by workers, and the implementation of the most significant anti-union laws in Europe. This and the reality of the collapse of Stalinism, not in the least shrinking the number of politicized and experienced rank-and-file militants within the unions (though the number of new workers applying to be shop stewards/workplace reps has increased when unions have shown they’re willing to fight), means that the current strike movement has quite a different character than the original Winter of Discontent of the late 1970s. However, it is the most significant reawakening in the current era.

In September 1979, 12 million working days were lost to strike action. December 2022, according to the largest estimates, could see a significant but much smaller number of around 1 million working days. And of course both pale in comparison to the great General Strike of  1926, which saw 126 million days lost.

The fact that today’s numbers fall short of historical precedent is not inevitable but a part of the conscious strategy of the trade union leaders. The strategy has been not for prolonged, coordinated strikes which tap into workers’ strength of actually running the economy, but short, multiple one-day actions which do cause major disruption but are still limited in comparison. Though the union leaders involved vary in character, they all feel forced to act from pressure from below. But they still prefer a conciliation with the capitalists and believe they can still win by playing by the rules of a capitalist state, which has shown it has no qualms in changing the rules when they’re not going their way. For instance, Prime Minister Rishi Sunak has recently announced his intention to introduce new, even more restrictive anti-union laws in early 2023.

Unions cannot fight and win with one hand tied behind their back. There is increasing coordination of strike days between unions but this needs to go much further. More strike dates should be declared. Mass pickets should be organized at companies providing scab labor during the strikes. Forces like Enough is Enough and other campaigns should help coordinate cross-union rallies with solidarity canvasses to build support among working class neighborhoods, estates, and college and university campuses. More than anything, planning and mobilization should begin towards a 24-hour general strike.

None of these things are out of the question. Members of International Socialist Alternative have found on the ground that the logic of the situation means in many cases even on regular tabling activity in working class neighborhoods, we are not introducing the idea of a general strike but it is being brought up with us from workers themselves. It shows the eagerness for a combative strategy from workers in the ranks and a willingness of ordinary working class people and youth to support them. The question is: will the union leaders use this initiative to go all out in a fight to win, or waste the momentum? The only thing that can decisively impact this is democratic and organized rank-and-file movements within the unions to make sure their full weight is used to score what would amount to a historic victory for the entire working class.