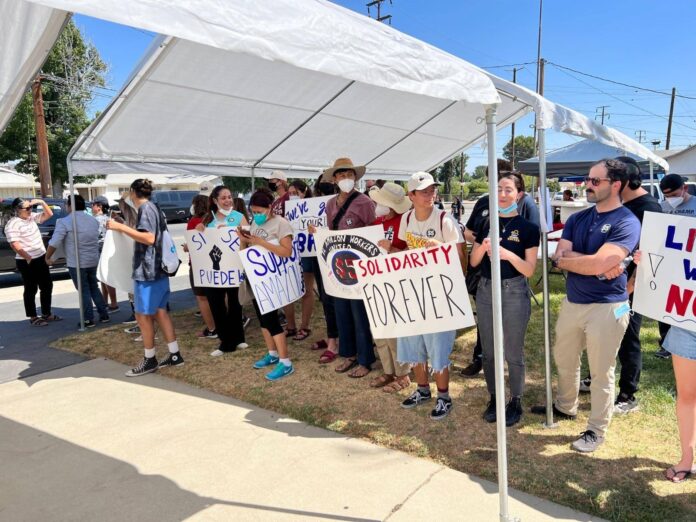 Over 150 workers walked off the job at the Amazon KSBD Air Hub in San Bernardino, California on August 15th, demanding a $5 per hour base pay raise from $17 to $22, increased pay for critical roles, safety improvements and an end to retaliation against worker-organizers. It’s the largest job action to ever face the company in the U.S.

The KSBD walkout followed a wave of protest in the U.K. for a £15 base wage earlier this month. Workers spontaneously organized sit-ins in the break rooms across at least seven facilities in Tilbury, Rugeley, Bristo, Coalville, Dartford, Belvedere, and Chesterfield with over 100 workers in Coventry walking out in response to an insulting 35 pence pay increase. The GMB union which represents workers at the Tilbury facility endorsed the protests, submitting a formal pay claim to Amazon for £15 base pay.

These actions highlight how Amazon workers can respond when Amazon uses their limitless legal and financial resources to lobby the National Labor Relations Board (NLRB), like their attempts to overturn Amazon Labor Union’s historic election victory at JFK8.

After months of petitioning and meeting in break rooms and outside of work with the support of the Southern California based Warehouse Workers Resource Center (WWRC), the KSBD Organizing Committee announced Inland Empire Amazon Workers United on August 15th with a walkout of over 150 workers at their facility.

The group delivered a petition with over 800 signatures to management in July. They used the petition as an organizing tool to approach hundreds of their coworkers around clear demands to discuss how they can organize collectively to pressure the company into improving pay and conditions. The August 15 walkout was the result of patient organizing from worker-to-worker, discussing workplace issues and building the confidence needed for their coworkers to come together and take action.

The KSBD Organizing Committee (OC) identified an opening to organize last winter when workers spoke out at an all-hands meeting about lost pay during a temporary holiday closure at the facility due to air freight flows. The OC circulated a petition addressing the hardships that workers faced over their lost pay in the middle of the holiday season. By registering this discontent in a petition and organizing around it, the OC was able to pressure the company to change its global policy which now only allows one unpaid closure per holiday season and commits to pay workers for their full scheduled shifts for any additional closures.

With a swift, immediate victory, workers demonstrated that it is possible to take on management collectively and win. This is a small lesson in class struggle that served as an important reference point in their organizing going forward.

The KSBD OC was able to consolidate their victory over the holiday closure to recruit more coworkers into their OC and begin petitioning in Spring 2022 for a $5 per hour base pay increase, an additional $1 increase for Ramp Associates, and a $1 increase for certifiable Critical Roles (Process Assistant, GSE operation etc.), and a 40¢ increase in the night shift differential.

The petition describes the realities of low pay for Amazon workers in San Bernardino in a straightforward and compelling way:

“Due to the never before seen inflation, jobs have begun providing higher wages for all types of workers. We as Amazon Associates work hard to ensure that the building hits the numbers it strives for and work together in order to provide satisfaction to all of our customers. The average rent in California is $1,700 and the average rent in San Bernardino is $1,650. With our current starting pay of $17/hr in a 40 hour work week, we make approximately $2,200 take home pay– meaning that over 75% of our income is going into rent alone.”

Management responded to the second petition during several all-hands meetings in early August announcing a $1.50 per hour raise for day shift and a $2 per hour raise for nights. With management unwilling to meet the full demands of a majority of KSBD workers signing onto the petition, the OC pressed on and began mobilizing for a walkout.

It’s crucial that IE Amazon Workers United consolidates the momentum from their August 15 walkout into a campaign for a union at KSBD that can fight for lasting protections and a strong contract. Without a union, anything that management offers workers can be clawed back by Amazon at any point. While management may concede more of the workers’ demands, worker-organizers should expect retaliation including firings and an aggressive campaign in the facility to undermine their organizing – underscoring the need for a union.

Ramp Associates at Amazon’s Air Hubs work outdoors in all-weather conditions operating heavy machinery and handling 2,500 – 4,500 lb freight cans called “ULDs” (unit load devices). Minor injuries arise from repetitive movements, maneuvering ULDs, manipulating locks, and other common industrial processes. There is also real potential for serious injuries and fatalities, like a 2021 incident involving a DHL worker who was pinned by a freight loader, resulting in the amputation of one of their legs.

To make matters worse, rather than hiring dedicated training staff with previous industry experience, Amazon has implemented their standard ‘Learning Ambassador’ program at Amazon Air. Management recruits Tier 1 Associates into this role to train new hires on all aspects of the operation including the operation of Ground Support Equipment (GSE) including K-loaders and Cargo Tugs which can haul upwards of 20,000 lbs of freight at a time. Learning Ambassadors are paid the same wage as Tier 1 Associates despite their additional responsibilities.

Many Learning Ambassadors have no prior experience operating GSE and are made responsible for training their coworkers with often as little as several weeks or months of first-hand GSE experience on the job. This program, relying on inexperienced workers, regardless of their qualifications, has built a house of cards for the sake of expediency and cutting labor costs. Given these conditions, it’s likely only a matter of time before there is a serious life-altering injury or fatality at Amazon Air if the situation goes unchanged.

Amazon’s entry into the air freight industry in the last decade with the construction of major Air Hubs in Leipzig/Halle (Germany), San Bernardino, and Cincinnati / Northern Kentucky has positioned the company’s air freight network within 100 miles of 73% of the U.S. population and expanded their distribution in Europe.

Amazon Air has grown from 163 flights in August 2021 to over 187 flights by March of 2022. This has allowed Amazon to rapidly expand next-day and two-day delivery service throughout the U.S. and build the corporation’s capacity to become a third party carrier in direct competition with FedEx and UPS.

Although 74% of Amazon’s operating profit is generated by the corporation’s cloud computing division: Amazon Web Services, Amazon is fundamentally a logistics company. They are able to capture over $450 billion in e-commerce revenue by pushing workers to their limits through invasive, by-the-second labor tracking and aggressive productivity standards.

Even one workplace shutdown, or several coordinated actions, could have a massive ripple effect across the industry at a time when workers are increasingly looking toward unions and workplace actions as a way forward in an unstable economy characterized by inflation, rising but insufficient wages, high gas prices, and an overheated rental and real estate market.

While Amazon is likely able to route around isolated work stoppages or strikes in some areas with little delay, coordination between Air Hub workers and workers at key facilities like JFK8 in Staten Island, which handles goods for the NYC market, could seriously threaten Amazon’s profits and even win union recognition, pay increases, and improved working conditions.

This requires the solidarity of organizing committees of workers linking up between workplaces across the logistics industry. With the Teamsters preparing for a possible strike of over 300,000 workers at UPS in 2023 and leading new organizing at DHL’s Cincinnati – Northern Kentucky Global Air Hub, there are significant opportunities for logistics workers to fight for better conditions and a union by withholding our labor power and coordinating job actions in solidarity with workers across the industry to raise the standards and expectations of all workers.

Under capitalism, unions are the strongest tool that working people have to secure a better living. Even though support for unions in the U.S. is at its highest point since 1965, convincing your coworkers to move from passive support for unions to playing an active role in organizing at your workplace is not always straightforward.

We can’t do it alone. Only one or a few outspoken workers can only go so far in the belly of one of the world’s most powerful corporations. There are unfortunately plenty of examples of charismatic pro-union workers becoming isolated by management and fired for standing up on their own without a team of coworkers organized around them.

Organizing on the job requires patience, dedication, and the trust of a core team of coworkers who are willing to make real sacrifices to build momentum for job actions including walkouts and strikes necessary to win a union and a strong contract at a multibillion dollar behemoth like Amazon.

This requires a strong Organizing Committee (OC) of workers across all departments, social backgrounds, age groups, ethnicities, and languages in the facility that is able to meet regularly to formulate demands, strategize, and build our coworkers’ confidence to take action. (See Socialist Alternative’s recent guide on how to organize at your workplace for more on this)

At Amazon, we know that we’re underpaid and forced to work in unsafe conditions but few workers believe that we have the power to take collective action to improve our situation. Many workers, including some who are seen as natural leaders, will attempt to resolve issues through management or HR without considering what we can accomplish if we take action collectively.

Fortunately today we have the example of Amazon Labor Union’s historic victory in Staten Island, the recent Amazon walkouts, recent and ongoing teachers and nurses strikes, and thousands of Starbucks workers organizing unions across the U.S.

Despite this upsurge in organizing, some workers will have a dismissive or cynical attitude toward the idea of collective action. It’s our responsibility to convince our coworkers that we can organize around clear demands to win immediate improvements and demonstrate what is possible with a union that can secure lasting gains.