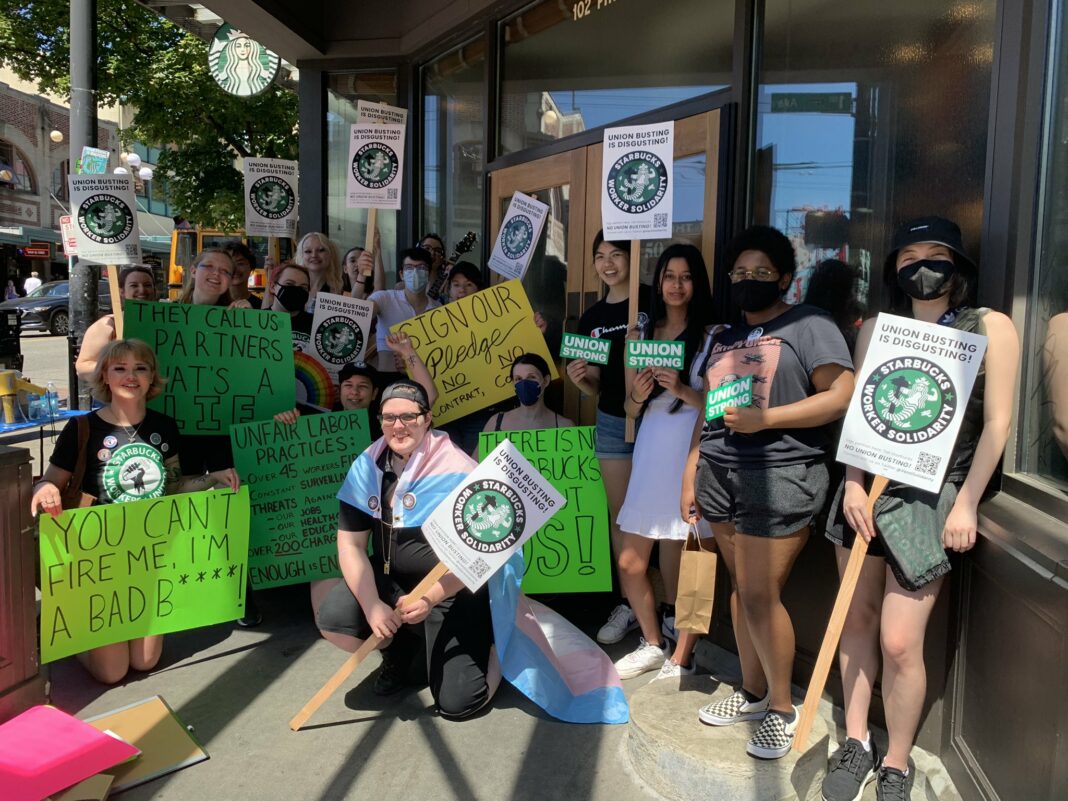 In the past year there has been a resurgence in the American labor movement. The union election victory at Amazon’s JFK8 warehouse and the events of Striketober with workers at John Deere, Nabisco, and Kellogg’s striking for better conditions has inspired a new generation of workers like us. Over 160 Starbucks stores, including our own, have excitedly voted to unionize with Starbucks Workers United (SBWU).

Young workers, who make up the majority of Starbucks’ workforce, are at the forefront of this movement, though all workers have grown sick of rising inflation, stagnant wages, and abysmal working conditions. Only 11.6% of the U.S. workforce is unionized, so for many of us, this is our first experience being in a union and there are understandably a lot of questions about what comes next.

Some of these questions were discussed at the June Labor Notes conference in Chicago where nearly 100 Starbucks workers attended! Both of the authors of this article were there and we were so excited to meet other Starbucks workers from across the country fighting for many of the same things we are in Boston. In this article we hope to map out what we see as next steps, including how to win a first contract, the role of clear publicized demands, how to wage successful strikes, and the need for democratic, national coordination of unionizing Starbucks workers.

Leading with Demands from Day 1

One of the key takeaways from Labor Notes was the importance of demands in a union drive. We heard from Amazon Labor Union Organizers about the role of demands in their successful campaign at JFK8. Their materials prominently displayed their key demands for a $30/hr base pay, two weeks paid time off, two half hour breaks with an hour for lunch, and an end to “time off task.”

Our campaign needs to be based around concrete demands that are developed democratically by our coworkers that send a clear message to workers that winning improvements in our workplaces only happens when we fight for it. Our experience is that demands like $25 base pay, an end to the healthcare audit with guaranteed access to trans-inclusive and comprehensive healthcare, and guaranteed hours are overwhelmingly popular with our coworkers.

Demands that we decide on ourselves also cut across corporate’s anti-union propaganda that the union is a necessary third party that won’t help workers. Unfortunately, the leadership of SBWU has advised organizers to avoid talking about demands and instead focus on convincing co-workers of the importance of democratically deciding whether or not we want to be in a union. As a member of SBWU, I think this is a grave mistake. Winning the confidence of our coworkers to fight tooth and nail for a union can’t happen with vague “unions are good” arguments. People need to know exactly what they’re fighting for, and what they can win.

The other thing we have heard is that putting forward demands this early on could sabotage negotiations. But this assumes Starbucks is negotiating in good faith, which CEO Howard Shultz has clearly said he won’t do. When the New York Times interviewed some of our leading spokespeople about this, they claimed that if they were only able to get a meeting with Howard Shultz, they could persuade him to support the union through charm and charisma. Given that Shultz has overseen the firing of 45 Starbucks workers who support the union, we think we’re going to have to force him to the table.

The Strike is Our Strongest Weapon

Starbucks has not hesitated to use brutal union busting tactics including retaliatory firings. They subject workers to intimidating 1-on-1 meetings, captive audience meetings, and hour cuts (often targeted at the most militant workers). For workers to have the confidence to keep fighting, it’s essential that retaliation is responded to immediately and effectively.

We can’t put our trust in the incredibly lengthy legal process of the courts and the NLRB to deliver justice or reinstate workers, if they ever do at all. Already some fired workers have expressed frustration with the lack of support they are getting from the SBWU leadership in fighting for their reinstatement, beyond pointing to the NLRB which has already been proven completely unreliable like in the case of Laila Dalton.

Over a dozen individual Starbucks stores have already taken up strike action. Immediately after winning their store vote, Starbucks workers in Buffalo went on strike demanding paid COVID  time off. Starbucks was so scared of strikes spreading that they gave COVID pay to every store nationally.  Workers in Marysville, Washington went on strike demanding an end to hour cuts and understaffing before even collecting cards.  However, on day three of the strike, workers started collecting cards on a strong political basis knowing exactly what it is they’ll be fighting for.

Recently, Workers United committed $1 million to a strike fund which is fantastic, and a huge step forward. At our stores, this immediately boosted the confidence of our coworkers to keep fighting. A key task for SBWU and Starbucks workers, which came up on multiple occasions at the Labor Notes Conference, is to immediately democratize the strike fund so that workers can decide how and when to use it.

Nothing scares the bosses more than militant collective action that spans the entire country, not just individual stores here and there. A first step towards this would be to lay clear plans for a one day nationwide strike. To pull something like this off, SBWU should organize a national conference, open to all Starbucks workers, to discuss, debate, and even vote on various aspects of strategy needed to organize more stores, get more workers to join our union, and win strong contracts.

Many stores today do not feel confident to strike yet. Smaller collective actions, like walkouts or a  march-on-the-boss, should be taken up around demands most galvanizing to the workers at individual stores. With the overturn of Roe v. Wade, Starbucks has offered to cover abortion travel expenses for partners who no longer have access in their home state, except they are threatening to withhold this benefit for unionized workers. Taking walkout action against this horrendous union-busting is the first step to getting Starbucks to concede on the policy and can help prepare stores to participate in a coordinated strike down the line.

For months, we were told that bargaining would be done on a store-by-store basis but more recently, it seems like the thinking has shifted more in favor of a regional approach. SBWU has correctly organized a national bargaining committee and regional bargaining committees are being set up. To make these bodies legitimate, representatives from every unionized store should be elected by their coworkers, rather than handpicked by union staff.

There is also a question of how to connect militant actions nationally. Key to building up our leverage in negotiations now and in the future will be for SBWU and Starbucks workers to fight for every contract to expire on the same day.  Same day contracts increase the possibility for these joint actions to happen. That said, individual stores prepared to strike should not hesitate or wait around for more stores to get on board.

The questions we face as Starbucks workers have major implications for the U.S. labor movement as a whole. The struggle for a union and strong contract at Starbucks can cause a ripple effect through the rest of the service industry, and it can inspire workers in all industries as well. That’s why it’s essential we unapologetically fight for demands based on our needs, not what the boss may be willing to give right now; base ourselves on the power workers have to disrupt profits on the shop floor; and lay plans for nationally coordinated actions to bring a corporate giant like Starbucks to the table.