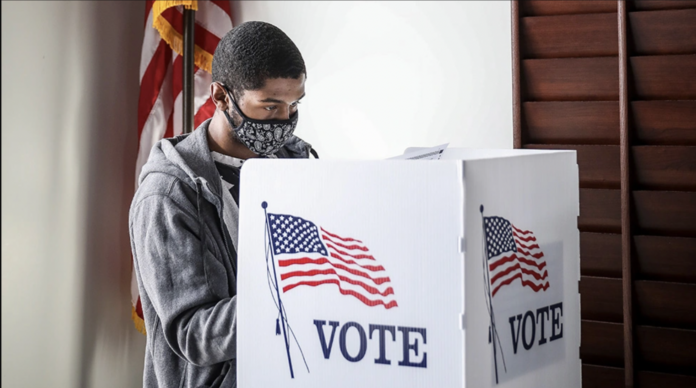 The following is a response to a New York Times editorial written by Charles M. Blow, titled, “We Are Political Hostages”.

As we head into the midterms the pressure is going to ramp up for workers, youth, and the oppressed to get in line and “vote blue no matter who.” The push for “lesser evilism” – choosing the lesser of two evils – is a standard feature of big elections, but this particular election sees the Democratic Party in a particularly bad place. Inflation is rampant and the majority of Biden’s agenda has been dead on arrival. Biden’s approval ratings have reached a record low of 36% and only 20% think he should run for re-election in 2024.

It’s in this context that the New York Times provides us with the most dour and uninspiring case for lesser evilism yet. This comes courtesy of pundit Charles M. Blow in his editorial entitled “We Are Political Hostages.” Rather than even attempt a defense of the Democrats, Blow proclaims that “‘freedom of choice’ in elections is an illusion” and declares that teaching children otherwise was “one of our greatest errors as a country.” According to Blow, we are stuck as political hostages to the two-party system, leaving us only with the choice of “the benevolent captors (Democrats) or the cruel captors (Republicans).”

To his credit, Blow’s doomerism is a refreshing contrast with the Democratic party’s other election strategy of gaslighting us into thinking everything’s fine. But, as with most lesser-evil arguments, Blow presents a wrong understanding of the nature of the two-party system, the reasons for the right-wing resurgence, and the way forward. His strategy of lining up behind “the benevolent captors” entails doubling down on the political approach that got us into this mess in the first place.

What’s more, Blow weaponizes identity politics to argue that while the privileged may vote however they like, it is marginalized people who don’t have an option. This argument is a cudgel in itself – handcuffing LGBTQ people, women, and racial minorities to a party that doesn’t fight for them, telling us not to set our political sights any further.

The Democratic Party aren’t “benevolent captors” as Blow portrays them. Whatever differences there are between the Democrats and Republicans, they are both thoroughly corporate parties, run and funded by big business. Neither represents the interests of working people. To “break out of captivity” we need to build our own party.

Blow’s lesser evilism isn’t new. It’s been a major ideological device in American politics for decades. Here are just a few examples that show how in the long run, it is precisely Blow’s lesser evil approach that has been a key force in entrenching the power of the greater evil and empowering the “cruel captors”:

At the height of the Iraq War under President Bush, the big anti-war organizations like MoveOn.org and United for Peace and Justice backed out of their anti-war organizing to line up behind the pro-war Democrat John Kerry. The anti-war movement gradually fizzled as the war continued into multiple administrations of both parties.

When attempts were made to defy bans on same-sex marriage, Democrats, including the first openly gay congressman Barney Frank, condemned the actions. This deflated some of the biggest challenges to the Bush administration. Anti-LGBTQ activists were emboldened, setting the movement back for years.

Obama came to power on the promise of “hope and change” against the failures of the Bush administration during the financial crisis of 2007-8. But despite having a supermajority in Congress, giving them free rein to pass a litany of long-held Democratic priorities, they delivered no major gains to working people.

In response to these failings, the right-populist Tea Party grew as the primary challenge to Obama. According to the logic of lesser evilism, Democrats and Democrat-aligned unions were not allowed to criticize Obama lest they give ground to the right. So for millions of working people dissatisfied with Obama’s broken promises, the Tea Party was seen as the main voice against the establishment. This directly paved the way for Trump.

In contrast, Blow explains Trump’s rise as being a product of  “some waffling about Hillary Clinton in 2016.” He blames Jill Stein voters and non-voters, but this short sighted logic ignores that it was so-called “Obama-to-Trump” voters in the rust belt that played a decisive role in Trump’s victory. The blame for Clinton’s defeat lies with the Democratic Party who completely failed to improve life for working people under Obama, and who then put up a Wall Street darling as their candidate in his wake. Were the Democrats committed to really defeating the “cruel captors” they would have thrown their support behind the candidate that could have beat Trump: Bernie Sanders. Instead they sabotaged his campaign every step of the way, directly contributing to Trump’s win.

The recent Dobbs decision overturning Roe v Wade is a continuation of this right-wing resurgence. For decades the threat of reversing Roe has been the big trump card of lesser evilism, a looming threat that meant people had no choice but to line up behind the Democrats. But, during those decades, even when Democrats held the presidency or congress, they made virtually no efforts to codify Roe into law. Nor did they move to stop the right-wing’s gradual whittling away of abortion rights leading up to Dobbs. Not only did a decade of lesser evilism not prevent the victory of a greater evil, in the process, it discouraged people from launching any other effective fight back.

Under Blow’s approach, being “political hostages” becomes a self-fulfilling prophecy. The refusal to fight our “captors,” be they “cruel” or “benevolent” only assures that we remain “captured.” This is why Socialist Alternative argues that working people, LGBTQ people, youth, and pro-choice supporters need a new party of our own.

Resistance is Not Futile

Blow doesn’t blame this situation on the capitalist class who actually controls society. Instead he blames those who fight back. He goes further than demanding a vote for Democrats. He sees any attempt at holding the Democrats accountable as irresponsible:

“Over the past year, progressives have demanded action from Democrats, demanded that promises be kept, demanded that more of a fight be waged. But, in the end, this is futile. What’s worse, it often provides ammunition to cruel captors who are waiting for a change to replace benevolent ones.”

Blow’s pessimism stems from a narrow view of how change is achieved. He can only see change as being the product of getting people into elected office. “Holding seats is the first order of business” he declares, “if they lose, nothing gets done.” But this ignores the role played by mass protests, occupations, walkouts, and strike action as the fundamental forces for change.

In Seattle, Socialist Alternative’s Councilmember Kshama Sawant forms a minority of one on the city council. But by using her position as a platform to mobilize working-class struggle, Sawant and Socialist Alternative have been able to win major victories, such as the $15 an hour minimum wage, the Amazon tax, and recently making Seattle the first abortion sanctuary city in the country.

This approach is based on working-class history and generalizes to a national scale. Roe was overturned under a Democratic president with a Democrat-controlled House and Senate. But Roe was won under the Nixon administration by a majority Republican-appointed supreme court. This wasn’t because Nixon was a nice guy, but because the pressure of the mass upheavals of the 1960s and 1970s was able to bring change that can’t be won by lining up behind the “benevolent captors.”

We don’t need to accept the status of “political hostages.” The fight for political liberation from slavery, captivity, and oppression requires breaking free from Blow’s logic. We need to tell the Democrats “No more excuses!” To fight against the political subjugation of working people to corporate parties points directly to building our own party, run and funded by working-class people. This means running independent candidates without corporate money, on a socialist program. It’s on the basis of an organized, working-class movement, and political independence from the “captors” in the Democratic and Republican parties, that we can bring about meaningful change.