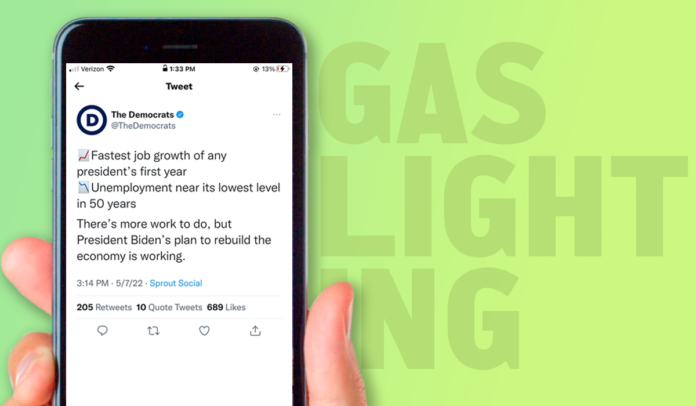 The economy is thriving, COVID is entirely under control, and our basic rights are being safeguarded. This is reality according to the Democrats who have resorted to all-out gaslighting as their number one campaign strategy going into the midterms.

Working people are in a devastating situation right now with sky-high gas and food prices, skyrocketing rent, the never ending loop of COVID surges, and a right-wing assault on our bodily autonomy. The Democrats have done a grand total of nothing to alleviate this pain, and the consequences for this inaction will be historic losses in the midterms.

But rather than fighting to win over voters by delivering on any number of broken campaign promises, the Democrats are resorting to psychological warfare. They’ve concluded that their hail mary for November is hypnosis: “your life is fine, we’ve done so much for you, you’re just too dumb to understand.”

Why Fight When You Can Gaslight?

According to Gallup’s latest data, only 18% of people approve of the job Congress is doing and 16% are satisfied with the way things are going in the U.S. Compare this to the 2018 midterms where – under Trump – satisfaction with the direction of the U.S. was more than double what it is today. In 2018 the Democrats took back the House with a significant “blue wave.” Each key metric for 2022 is at least 10 points lower than the historical average at the time of previous midterm elections.

These rock bottom numbers didn’t materialize out of thin air, they’re a reaction to the very dangerous situation working people have found ourselves in, and the fact that the Democrats outright refuse to fight to make things better.

Rather than responding to the hundreds of anti-LGBTQ bills up for debate across the country by passing the Equality Act, the Democrats slapped us across the face with a rainbow flag and hoped we wouldn’t notice.

In the White House statement to kick off Pride month, they wrote: “Since President Biden took office, he has championed the rights of LGBTQI+ Americans and people around the world, accelerating the march towards full equality.” When trans kids in Texas could be taken from their families, trans healthcare is banned for students in Alabama, and the Ohio GOP is weighing mandated physical inspections for any school athlete suspected of being transgender, in what world are we marching towards full equality?

Rather than fight to pass the PRO Act which would have been one of the most significant pieces of pro-worker legislation since the 1930s, they dropped it and tweeted: “President Biden is the most pro-union president in American history.”

Rather than responding to spiraling inflation with an immediate increase in the federal minimum wage, Joe Biden wrote in a Wall Street Journal op-ed: “Since I took office, families have increased their savings and have less debt…The U.S. is in a better economic position than almost any other country.” In the first two and a half weeks of June, the DNC tweeted 25 times about how well the economy is doing.

In a joke so dark you can barely see it, the Democrats were just forced to drop Nancy Pelosi’s proposed midterm slogan due to abysmal polling. The slogan? “Democrats deliver.”

So why is it that, despite knowing the consequences, they’re not delivering? Fundamentally, it is because the Democratic Party is a party loyal to the maintenance of the capitalist system. As we wrote at the time, all those big promises they made in 2020 were made under duress. The Democrats are not a party that supports a sprawling welfare state. The system was in such a freefall that even Trump was forced to support mammoth social spending in order to stave off a spiraling economic crisis.

The establishment also faced the threat of revolt coming from two very distinct directions. On the one hand we had the Black Lives Matter rebellion, with millions angrily taking the streets for an end to racist police brutality. This was the biggest protest movement in U.S. history. On the other hand, we had the January 6 attempted coup which, though dramatically smaller in scale to BLM, represented an opposite threat of an emboldened right wing in the streets. The bourgeois center, already deeply strained by 4 years of Trump in office, was no longer holding.

In the summer of 2021, Biden enjoyed several months of economic recovery and the temporary receding of the COVID chaos. In other words, the pressures that forced him to make big promises let up. Without pressure in the form of a mass movement, or even a single demand from the left in Congress, Biden and the Democrats quickly fell to the pressure of the ruling class to cut back on state spending and shelve “Build Back Better.”

Passing their domestic agenda at this stage would require throwing out the rule book and taking aim at Manchin, Sinema, and the courts. It would require them being willing to mobilize ordinary people into the streets, something which would surely send them into anaphylactic shock. So, rather than risk it, they’re folding their hands.

The consequences of this approach for ordinary people will be dire. A Republican takeover of Congress guarantees that, barring a mass movement, nothing progressive is won in D.C. for at least two years. Beyond the obvious impact this will have on people’s material existence, it will undoubtedly also have an effect on consciousness. When faced with an atrophied left, some ordinary people may begin looking to the right, or even the far right, for answers. Others, however, will see the growing right wing threat as a call to action to movements in the streets and their workplaces that are not under Democrats’ control.

The Left In Congress

Bernie Sanders’ recently wrote a forceful op-ed in The Guardian calling on the Democrats to change course. He wrote: “In an extremely difficult and unsettling time… the American people want their elected officials to stand up to powerful special interests and fight for them. Well. The Democrats control the White House, the Senate and the House – and yet that is not happening. They are being held accountable for their inaction, and they’re losing.”

He correctly pointed out the Biden administration’s totally fruitless strategy of polite negotiations with Joe Manchin and Kyrsten Sinema and called on the party’s leadership to fight.

But Bernie yet again takes a major left turn to nowhere by insisting that the Democratic leadership really wants to help working class Americans, it’s just the Republicans and Democratic defectors in the Senate who are holding things up. This is just a lighter shade of delusion.

The cleanest illustration of just how false Bernie’s assertion is, let us consider what Biden could do, right now, using executive action.

To make the point even clearer – in May (the same month it was announced that the Supreme Court intended to overturn Roe v Wade, and the day before the Uvalde mass shooting) Nancy Pelosi was sending out hundreds of thousands of robo-calls encouraging Texans to vote for Henry Cuellar, the anti-choice, pro-NRA Democrat.

She has spent the past four years laughing “the Squad” out of the room, making absolutely clear she’s not on board with Medicare for All or the Green New Deal.

In Biden’s State of the Union in March, on the question of defunding the police, he shouted “We say fund them! Fund them!”

Rather than seeing this hostility for what it is and positioning themselves as antagonists of the establishment, Bernie and the Squad have done exactly what they accuse the party’s leadership of doing with the Republicans: dropping the fight.

Every young person that was strong-armed into voting for Biden against their better instincts is learning a devastating lesson right now.

Despite all the hemming and hawing from the liberal media that voting for Democrats is all you can do to fight the right, the right is still winning. Despite their insistence that voting for the lesser of two evils was the only way to protect our rights, our rights are now under attack.

It would be easy, and is likely in fact, that many young and working class people will simply close their eyes to politics. Concluding that neither party is worth voting for can be a demoralizing experience – especially in a society where we’re told politics is just voting every four years. But it can also be freeing – it can amplify the pressure for a full break from the Democratic Party.

This is where the left has a dire and historic obligation to begin building a new, mass political home for all the young and working class people turning away from the Democrats. A huge space has opened up in U.S. society for this but it requires significant forces to step up to the challenge.

We need an independent political party that students see as a vehicle they can use to fight anti-LGBTQ attacks in their school districts. A party that workers can use to build militant political support for their strike, union vote, or contract negotiations. A party that is truly democratic, with a political program that is voted on and tactics that are coordinated.

Building this type of independent mass political organization – alongside the crucial ongoing project of rebuilding a fighting labor movement and vibrant social struggles – should be a priority for every single left-wing labor leader, every socialist in office, and every social movement.

It is only on the basis of an organized working class mass movement, and political independence from the rotten Democratic Party, that we can undercut the fear that nothing can change and, even more importantly, undercut the growth of the right.