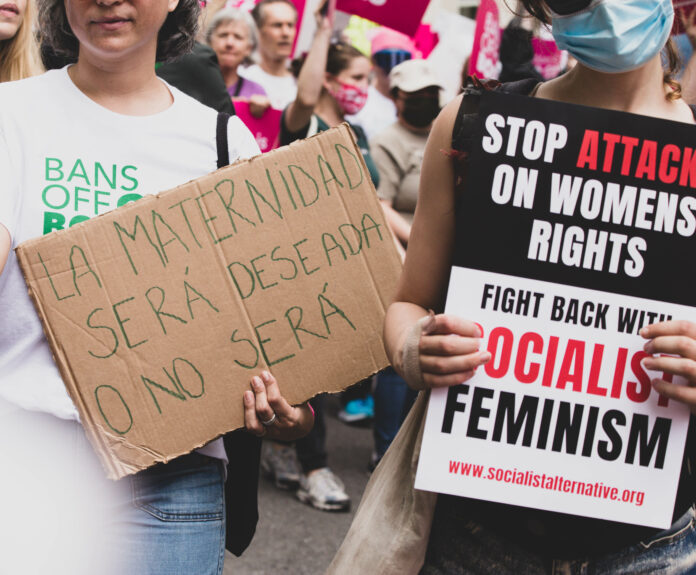 (Check back here for a list of protests tonight)

Roe v Wade has been overturned. This is a historic defeat for the women’s movement and represents a victory in the right-wing campaign to undermine the bodily autonomy of women and queer people across the country.

Despite overwhelming support for legal abortion, tens of millions now live in states where getting one means breaking the law. This will overwhelmingly fall on the backs of poor women who even more frequently now have to travel hundreds of miles and miss several days of pay to have an abortion. While it has been the right that has waged a determined campaign to undo Roe for decades, it is the Democrats and their NGO affiliates that allowed it to happen.

It didn’t have to be this way. With the widespread support for upholding Roe, the liberal-led women’s organizations could have waged a truly mass struggle to protect it. The leaked draft opinion in May could have served as a launching pad for a months-long campaign of protests, town halls, and direct action. Rather, they’ve actively demobilized the movement and instead funneled it into a fruitless “get out and vote” charade.

EMILY’s List, Planned Parenthood, and NARAL Pro-Choice have announced $150 million in spending on the Democrats in the 2022 midterms. Heather Williams, executive director for the Democratic Legislative Campaign Committee said of Democratic voters: “Roe falling certainly gives them additional motivation and urgency [to vote].”

This is an insulting slap in the face to the hundreds of thousands if not millions of people who were looking to take action to prevent this ruling from coming down.

“Vote blue to protect abortion rights” means nothing when the Democrats are refusing to take action. Joe Biden is sitting on a pile of executive orders he could sign right now expanding and guaranteeing access to medication abortion across the country. Amidst a shockingly barbaric assault on trans and nonbinary kids across the country, Democratic Party girlboss-in-chief Hillary Clinton says the “transgender debate” should not be a priority for the Democrats. Add this to the long list of things the Democrats are choosing to ignore rather than fight for.

It’s as clear as day that we need brand new mass organizations, wholly independent from the Democratic Party, that will fight unapologetically against the onslaught of attacks from the right.

In many states, rolling back abortion access, assaulting the rights of trans kids, and attacking any anti-racist curriculum in schools have become Republican politicians’ favored ways of whipping up their core base. With a complete lack of leadership from the Democratic Party or liberal NGOs, stopping the right in their tracks will require a completely independent movement of young and working class people.

Socialist organizations, unions, and social justice groups should join forces to launch such an organization. Necessary structures for our movement must be built so that demands, tactics, and strategy are democratically decided.

Unfortunately, the largest socialist organization in the U.S., the Democratic Socialists of America, has merely launched a website that calls for donations to abortion funds and to join DSA. This is an abdication of responsibility in the midst of this historic attack.

If a new mass organization were to cohere, which we think is absolutely necessary, Socialist Alternative would enthusiastically build it and fight for it to have a socialist feminist program.

This would mean a set of demands that speak to the far reaching needs of women and queer people. Demands that point both to bodily autonomy and giving people the means to have a family if they want to. This includes: trans-inclusive Medicare for All with free abortion on demand, universal childcare, fully funded public education, high quality permanently affordable public housing, public ownership and democratic control of the baby formula and diaper monopolies alongside all other parasitic mega-corporations.

We would fight for such an organization to use tactics rooted in the class struggle, rather than a reliance on individual acts of resistance. With the overturn of Roe, people will do what they must to gain access to abortion, including utilizing underground networks, abortion funds, and crowdfunding from friends and family. But the focus on mutual aid alone rather than building a mass struggle will not be enough to win back abortion as a legal right in this country. Only mass struggle can do that. This means mass marches and protests, walk outs, direct action, and even strikes. We can look to the historic feminist movements in Latin America and Ireland for inspiration.

Liberal feminism has proven to be completely bankrupt. Fighting for our rights and winning back those we’ve lost means fighting for socialist feminism. We need a new party for working people, women, queer and all oppressed people that bases itself on social movements and fights unambiguously for our interests.

It is only on the basis of an unapologetic struggle of young people, working class people, and all those oppressed under this brutal system that we can put a stop to the right’s dangerous escalation.