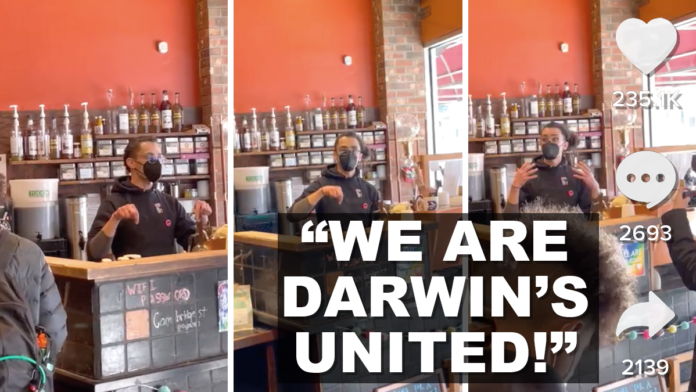 On Tuesday, March 29, on cue from a carefully timed text from their coworkers in the bargaining room, unionized coffee shop workers across all four locations of Darwin’s Ltd. in Cambridge, MA announced to customers that they were taking a synchronized seven-minute break and walking out. Their brief but meticulously coordinated work stoppage won swift concessions and sent ripples across the coffee shop union movement, going viral on TikTok with over a million views in just a few short days.

As a result of just seven minutes’ disruption on the shop floors, Darwin’s United won four more bargaining sessions scheduled within the next six weeks, after having had just one session in the previous six weeks. The union also won a new disciplinary agreement with due process and a series of warnings, a huge step forward for job security; management had been playing hardball trying to defend its ability to fire workers for virtually any offense.

Darwin’s, a coffee and sandwich chain in the Boston area, was among the first wave of independent coffee shops to win voluntary union recognition last September. Winning a union, however, is only the first step of workplace organizing: now workers in Darwin’s United are fighting for their first contract.

“Café unions’ success or failure in winning a first contract — a hurdle that only 14% of union drives clear within the first year — will be the decisive factor in determining the lessons that baristas and cooks take forward. Major contract victories could spur on the movement further, while ineffective unions and never-ending negotiations could lead to decertification votes or push disenchanted workers (and anti-union views) into other industries. In this formative period for a new generation of workplace activists, it’s critical that the emerging unions learn from the best traditions of class struggle unionism (and from the failures of business unionism) and apply them to their own contract battles.”

Until that Tuesday, Darwin’s management had proven eager to drag bargaining out as long as possible, leaving as long as six weeks between bargaining sessions and refusing to engage with workers’ proposals and demands. All the while, the pressures of overwork and understaffing threatened to drive out key workers. Workers began to recognize the union-busting threat and the need to turn up the heat on management.

This escalation followed an all-member meeting of Darwin’s United held on March 10th. This meeting was a crucial step in laying the basis for active, discussion-oriented union membership and members debated and voted to arrive at concrete demands to unite the membership behind clear goals in bargaining.

Hannah Smith of the Darwin’s United Negotiating Committee wrote of the crucial importance of this meeting:

“When we make our demands clear, when we give those demands a number, we stick an expectation into the minds of workers and the minds of a community. We make sure that our coworkers know what we are fighting for. And when ownership or management balks at our request to lead decent lives, we will show the community exactly what their ‘community spaces’ hold dear: not the workers, whose names and stories they know, but profit. We know that pressure works. If we don’t utilize it, we are acting as fools. As goes a cornerstone adage in the labor movement: ‘Power in the bargaining room comes from power outside the bargaining room.’”

The walkout was primarily an expression of frustration at continued understaffing and lack of COVID safety, all while six weeks had passed since the last bargaining session and management wasted time haggling over irrelevant details in the bargaining room. Workers on the bargaining team reported that management would not respond to the union’s proposals, and would instead counter with completely different language of their own that was unacceptable to most workers. It became clear to the rank and file that management wanted to drag out the process as long as possible, which if successful could introduce the threat of demoralization crushing the union and contract. Meanwhile, the membership was ready to start fighting for bold demands.

As a testament to strong citywide momentum-building alongside community members and workers at other stores, a number of workers at other unionizing coffee shops, including Pavement Coffeehouse and Starbucks, were present at the Tuesday walkout. They held signs on the sidewalk in support of living wages and rebuilding a fighting labor movement.

The original plan for a 5-minute synchronized break was changed to seven minutes in solidarity with the Memphis 7. The struggle of Starbucks and other organizing coffee workers is one and the same. Worker solidarity across stores and across companies will be absolutely crucial to preventing the bosses from stamping out the union effort with a divide-and-conquer strategy. If union-busting succeeds at one store, it can happen at others. After (thus far) getting away with the mass firing in Memphis, Starbucks has continued this tactic to punish key union organizers in other stores across the country. Only direct action – and particularly direct action that interferes with profit – will have the best shot at winning reinstatement. The fight for job security, among other key demands, must be central in union campaigns from the start. The added emphasis on solidarity with the Memphis 7 played a role in strengthening outside support. Eight Starbucks stores are now in contract negotiations, and they will need similar escalation tactics to win.

The walkout’s success demonstrates that rank-and-file initiative, solidarity, and coordinated action is indispensable in the fight for a union and a first contract. This undoubtedly must come from union members’ active involvement in strategy and democratic deliberation.

Tactics like the Darwin’s walkout, and the active democratic engagement that made it possible to pull off so successfully, should be replicated at other stores engaged in similar fights, at Starbucks and elsewhere. Coffee workers at Darwin’s, Starbucks, and Pavement in Socialist Alternative are holding an organizing meeting on Tuesday, April 19th to hear lessons from the Darwin’s walkout and talk strategy for escalating the movement citywide.

Having taken the first major steps to hold (and win) union votes in historically unorganized workplaces, building up our capacity for militant tactics can point the way forward to major victories, further organizing of the industry, and a wholesale revitalizing of the labor movement in the 21st century.

Watch the video of Sam’s speech to their store at the start of the walkout, and read the transcript of their full speech below:

Hello Darwin’s customers! May I have a moment of your attention please?

This is an announcement from the workers at all four Darwin’s locations who make your sandwiches and coffee. We are Darwin’s United!

We unionized back in September, and now we’re fighting for a first contract — because we put so much aside every day to run this place, and we love the good parts, we love our regulars, and we love each other.

But right now there’s bargaining going on. Management is dragging out that bargaining process. They’re are making it look like they would rather see us all get fed up and quit, rather than win a contract that guarantees us the things we need, to do our jobs safely, and live with the respect and the dignity that we deserve.

Union busting takes many forms. You know, we at Darwin’s, we won a union, something that seven Starbucks workers in Memphis, Tennessee were recently fired for trying to do too.

A lot of the time we’re too understaffed back here – you know that from the wait times – we’re too understaffed here to take the short breaks we need to drink water, go to the bathroom, or whatever we need to do. So right now, we’re going to take a quick seven minute break, together at all four stores, in solidarity with those Memphis 7 who were fired for fighting back at their café.

So we’re going to take a seven-minute break all at the same time. So we apologize to all of you in line for making you wait a little bit extra for your order today. But everything would run much more smoothly here at Darwin’s if we had a real say on the job. If we were staffed well enough to take breaks. If we were paid enough to come to work less stressed, or to stay home when we’re sick. If we all had healthcare. If we all had time we could afford to take off, so that we could come back to work feeling refreshed.

That’s just some of what we’re fighting for. We hope you all will understand, we hope y’all will stand with us in our struggle for those things.

So thank you so much. We will be back in seven minutes to keep making those drinks and sandwiches. Thank you. Solidarity.