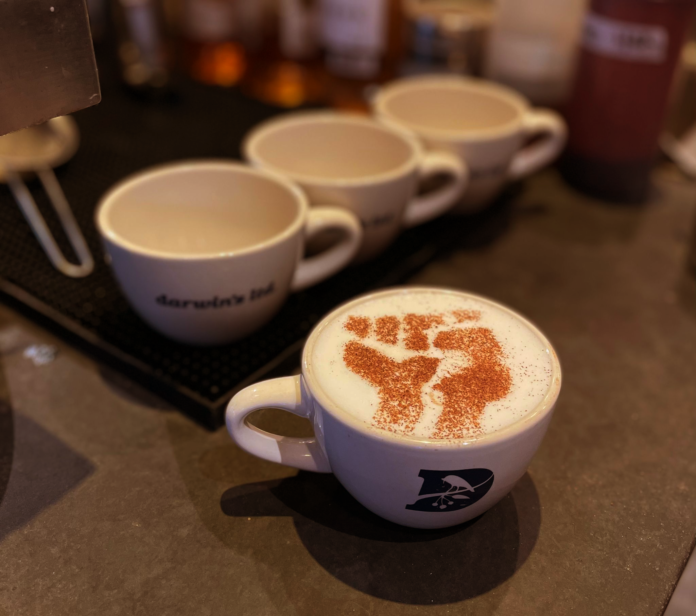 Sam White is a member of Boston Socialist Alternative, an employee at a recently-unionized independent coffee shop in Boston, and they are a member of their workplace’s Contract Action Team.


If Larry Margulies, the owner of Pavement Coffeehouse, had walked into any of his eight Boston-area cafés in late December, he would have gotten a taste of a new kind of solidarity now brewing across the country. Pavement’s newly-unionized baristas and sandwich makers, trailblazers in a rapidly growing national movement of coffee shop workers, all wore stickers on their aprons derisively quoting back the Tesla-driving owner’s comments in a recent Boston Globe article: “I’m a good boss.”

The witty tactics and instinctive solidarity among café staff — a disproportionately young, queer, and left-leaning workforce — are inspiring new additions to the reemerging labor movement.

In Greater Boston alone, as of press time, hundreds of workers at 15 cafés across three local businesses have won voluntary recognition with the UNITE HERE New England Joint Board. Workers at six local Starbucks locations have joined the wave of “partners” filing for NLRB elections. Murmurings abound about which Boston coffee shops will unionize next.

The wave represents a sea change and a sign of things to come. In an industry notorious for unpredictable hours, subminimum wages, tip theft, high turnover, and little recourse for abuse from customers and management alike, standard practice has long been for workers to simply quit (or be fired) when disputes come to a head.

Today, though, “now hiring” signs line the windows of cafés that survived the pandemic on the backs of workers denied healthcare, paid sick time, or safe working conditions. Those remaining in the industry have the wind at their sails as they chart a new course: to get organized, and fight back.

It is a huge development that millennial and Gen Z service workers not only feel empowered to change things, but have begun to see union drives as part of the answer. Unions are at a 57-year high in popularity despite historically low membership rates after decades of defeats. Younger generations generally lack firsthand experience of both the victories that can be won through militant strike action and, on the other hand, the betrayals and sellouts by conservative labor leaderships during the neoliberal era.

Growing up in the shadow of crushing student debt into an era of perpetual capitalist crises, young workers and students around the world have been the driving force behind explosive social struggles like Black Lives Matter and the climate movement.

Concrete victories, however, have been sparse — except for where unions, led democratically by the rank-and-file, have fused the militancy of street protests and community involvement with the power of the organized working class on the shop floor.

Recent labor losses also hold key lessons. Many factors played a part in the Amazon warehouse workers’ loss in Bessemer, AL, not least of which was Amazon’s well-oiled union-busting machine. One major setback, however, was the failure of the Retail, Wholesale, and Department Store Union’s bureaucratic leadership to give workers themselves the task of organizing their coworkers and devising a fighting program of demands, which could have mobilized a broader layer of workers into action and encouraged them to see through Amazon’s anti-union propaganda.

Behind coffee shop counters, there are important takeaways for workers to discuss. Chief among them is that real union power comes not from union higher-ups or from wordsmithing at the bargaining table, but from the power of an organized rank-and-file.

The fact that café workers both at smaller companies and at a behemoth like Starbucks have begun winning union recognition is a huge step — particularly considering the refined union-busting chops of Starbucks, which functions (and brands itself) much like the Amazon of the café industry. Winning a union, though, is just one step toward winning a first contract.

Café unions’ success or failure in winning the a first contract — a hurdle that only 14% of union drives clear within the first year — will be the decisive factor in determining the lessons that baristas and cooks take forward. Major contract victories could spur on the movement further, while ineffective unions and never-ending negotiations could lead to decertification votes or push disenchanted workers (and anti-union views) into other industries. In this formative period for a new generation of workplace activists, it’s critical that the emerging unions learn from the best traditions of class struggle unionism (and from the failures of business unionism) and apply them to their own contract battles.

Café workers already active in their union drives must urgently take up the task of involving more of their coworkers; the union is all of us. On-shift or after-work conversations about demands and on-the-job issues can reveal what workers are prepared to fight for, while showing those workers what’s at stake. Group chats and email lists, while important, are no substitutes for full, in-person membership meetings for building activist-driven unions into powerful democratic bodies of workers.

New emerging leaders should take up roles like joining — or forming — a contract action team to map out a fighting rank-and-file-driven strategy for winning a democratically-decided program of demands. They should consider what tactics and escalating actions might draw more workers into activity and boost morale while showing management the union’s power outside the bargaining room. Coordinated walk-ins, all workers wearing red on bargaining days, rallies, or customer teach-ins could all lay the basis for workers to feel ready for bolder actions down the road, including strikes — workers’ ultimate weapon over the bosses.

A Working-Class Fightback Against the Bosses

At Pavement, members of the bargaining committee and core organizers have faced retaliation on the job for their union activity. Several months into contract negotiations, demoralization and staff turnover have emerged as reminders of the urgent need to develop a broader layer of leaders on the shop floor, democratically mobilized around concrete demands and a plan of escalating actions.

At Darwin’s Ltd. in Cambridge, the second of three Boston-area chains where workers have won voluntary union recognition, namesake owner Steve T. Darwin quietly went on to retain a union-busting law firm to represent management in negotiations, another sign of the uphill terrain workers face at the bargaining table.

And the friendly rivalry between Darwin, Margulies, and the owners of a third local chain — Somerville-based Diesel/Bloc/Forge — has not stopped the three small-town bosses from collaborating around their common class interests: reducing labor costs, squeezing more from their employees, and keeping customers rolling in throughout the covid surges.

Add Starbucks’s multibillionaire former CEO Howard Schultz to the equation, and the battle lines become clear. It is up to café staff to organize across divisions and fight back — on a unified working-class basis.

As café owners big and small consolidate their power against the movement, workers should expect them to exploit every faultline on the shop floor. Bold, inclusive, democratically decided demands are workers’ best defense and offense, giving all workers a clear stake in joining the struggle.

Front-of-house staff must fight for the needs of back-of-house as their own, and vice versa, organizing across a notorious set of gender, language, and cultural divides in the restaurant industry. Cisgender workers must fight for comprehensive healthcare coverage for their trans coworkers. All workers must fight for PTO and leave policies that meet the needs of workers with children and families. Pay and scheduling policies should be changed so that workers are never incentivized to compete against one another for hours and tips.

Local coffee shop workers must see their contract victories and bold tactics, from stickers to strikes, as beacons that can inspire confidence and ignite union drives elsewhere. And workers both in and outside the industry must recognize their common stake in the urgent task of rebuilding a fighting movement of the working class. In every café and in every city, Socialist Alternative is determined to do all it takes to help workers lead this struggle forward.

Standing before a new generation of unionizing workers is a remarkable opening to bring lasting change to not just the food service industry, but society as a whole.