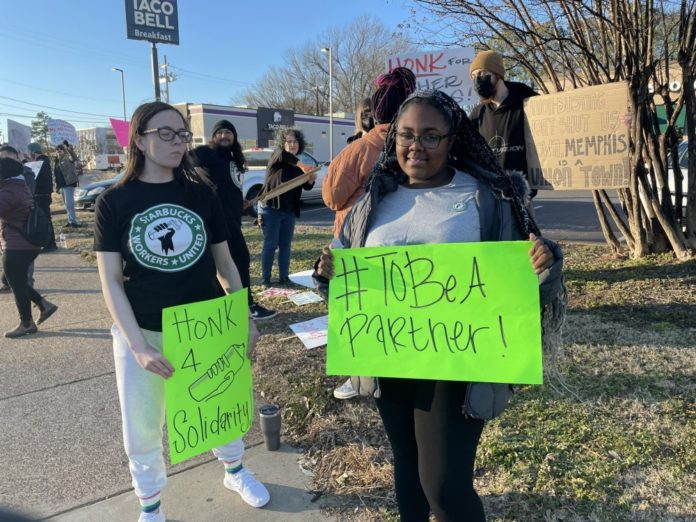 Tuesday morning, Starbucks retaliated against workers organizing for a union and fired members of a Memphis store’s organizing committee. According to a statement by Starbucks Workers United, seven workers were fired, representing 35% of the store’s workforce. The Memphis store filed for a union election with the NLRB on January 19.

Just hours after the workers were fired, they organized a lively picket outside their store chanting, “say it loud, say it proud, Memphis is a union town!” This is exactly the response we need when we run into Starbucks’ vicious union busting tactics.

This is not the first retaliatory action Starbucks has taken against workers in Memphis. In late January, Starbucks shut down their store ahead of a solidarity action organized by the workers. Now, the company has taken union-busting to the next level by trying to cut the head off the store’s organizing efforts.

“I was fired by Starbucks today for ‘policies’ that I’ve never heard of before and that I’ve never been written-up about before,” said Nikki Taylor, a shift supervisor at the Memphis store. “This is a clear attempt by Starbucks to retaliate against those of us who are leading the union effort at our store and scare other partners.”

In a period where Starbucks is becoming increasingly brazen with the use of “captive audience” meetings, one-on-one meetings with managers and executives, and text blasts to discourage workers from supporting the union – and in some cases, bolstering their attacks with veiled threats – the firing of the Memphis workers represents a test case. If Starbucks can get away with firing the workers without a severe impact on their credibility or profits, it will embolden the company to dish out this “nuclear option” on other workers who are leading the fight to organize.

On the other hand, if the movement is able to urgently mount a fightback that successfully pressures Starbucks to reinstate the fired workers, it would mean that Starbucks’s attack will have backfired. It will show Starbucks workers everywhere that they don’t need to be afraid in the face of Starbucks’s vicious union busting and intimidation, because if Starbucks comes after them, the movement will have their back and we’ll win.

This puts the struggle at a crossroads, and places a major spotlight on what Starbucks Workers United does next.

Starbucks Workers United has said that they plan to file an Unfair Labor Practice charge against Starbucks in response to the firings. This is a necessary start but alone can’t address the immediate needs of the movement. Retaliatory firings are blatantly illegal under the National Labor Relations Act, and Starbucks knows this full well. However, in a country with almost universal at-will employment, the burden of proof is on the employee to show that they were retaliated against, and the bar is high. Even if that burden of proof is met, the NLRB will rarely issue a punishment that amounts to more than a slap on the wrist for a company. In the case of Amazon, the NLRB did little to remedy four high-profile cases of retaliatory firing in 2020, which posed a significant barrier for worker organizing and put a chilling effect over many workers who may have otherwise supported the union.

Similarly, a Tesla factory worker in California was fired in 2018 for distributing union leaflets in the company parking lot. The UAW, who were helping the workers to organize, focused solely on legal efforts to win the worker’s reinstatement. It wasn’t until March 2020 that he got his job back, long after the unionizing efforts had failed.

“Some of these cases take years to conclude,” said Matt Smith, a former SEIU organizer. “By the time the workers are able to be reinstated, the union election has already come and gone, and the company has successfully busted the union.”

We need to broaden our struggle beyond just a legalistic strategy which would play directly into the hands of the company by allowing Starbucks to keep key workers out of stores while the union election takes place. The pickets today in Memphis are a fantastic launching pad for continued action at their store alongside solidarity actions across the country.

An urgent response to these firings is needed nationwide – we need a swift reaction from Starbucks workers and the broader community, using our collective power to injure Starbucks profits, which has been shown to be effective at winning workers their jobs back much more quickly.

Starbucks Workers United should use this moment to take the gloves off and show what the collective action of workers is capable of, by organizing an emergency meeting of nationwide Organizing Committees to put together solidarity rallies building on what the Memphis workers did today. More than 60 Starbucks locations in 20 states across the country currently have public union drives. If workers and the wider labor movement in every city where these drives are taking place organize rallies, thousands would turn out across the country. Starbucks would be put on notice and if they don’t urgently rehire the Memphis workers, rallies could be a launching pad for bigger actions and even walkouts.

Not only would this show Starbucks the real risk of using retaliatory firings in the future, these actions would demonstrate to Starbucks workers who are considering unionizing that collective action is their best protection. It would also allow SBWU to show workers how much they have to gain by unionizing and winning contracts that end at-will employment.

If allowed to stand without a militant challenge from the workers themselves, this attack could have a serious impact on the momentum of the burgeoning movement. On the other hand, a swift and powerful response from the union could accelerate the pace of this struggle. It would show thousands of workers that we can win when we stand together. With this new challenge issued, the stress test for this movement begins now.

Socialist Alternative sends all our solidarity to the fired Memphis workers and all Starbucks workers facing down this brutal union busting. We are excited to do everything we can to help Starbucks workers win a union and good contracts across the country!