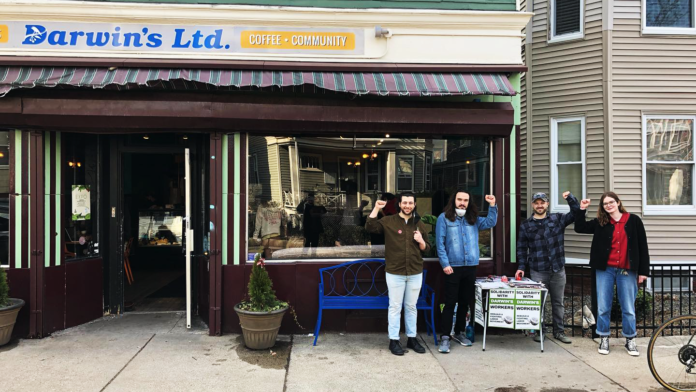 On Thursday, March 10th, a majority of the membership of Darwin’s United, the newly-unionized staff of four local coffee shops in Cambridge, Massachusetts, met in a small, rented ballroom to discuss, to vote, and to rally. The agenda was packed: perhaps too packed, but carefully planned by representatives from each store, all eager to stoke the flames of action. Each point on that agenda was introduced by a different union member, only some of whom have previously acted in leadership roles. A Darwin’s worker and fellow Socialist Alternative member chaired the meeting alongside a UNITE HERE staffer. There were small- and large -group discussions, where workers from different stores came together, in many cases for the first time. The Organizing Committee put forward several demands for discussion and voting, and the membership debated out details and amendments.

This is not to say the meeting was perfect, or entirely harmonious. We went into our first meeting expecting a naïve sort of homogeny, and instead we found people of different backgrounds, communication styles, and specific needs all coming together on the same floor. We heard conflicting priorities between back-of-house kitchen staff and front-of-house baristas in particular.

Rather than fundamentally dividing us, what the meeting did was lay those differences bare, such that we may begin to forge unity. Had we not all met together as we did, we may have forged ahead on the happy road to bargaining largely blind to entire sets of needs and voices. Instead, we now have the power which comes from differences: ingenuity and across-the-board coverage.

People in that meeting house stood up for what they believed in. When the Organizing Committee proposed demands, those demands were talked out at length. Not everyone agreed with each other. Voices were sometimes raised, and at times we stumbled and struggled to keep the focus. Never once did we struggle, however, to keep the fire of our union lit.

By the end of the night, despite our differences, we had CONCRETE DEMANDS to unite us in our fight for better lives:

This demand began at $20/hour. A member of the union rank-and-file proposed, to the discussion floor, raising that number to $24 on the grounds of the exorbitant cost of living in Cambridge. That number was talked out, democratically: concerns about it being unwinnable were raised. But where do we aim if not high? The history of food service work is one of accepting scraps, of generating profit and hardly seeing a dime. If we err on the side of caution, we are erring on the side of ownership and management.

No demand was more thoroughly talked through than this one. The unanimous vote reflects that: the more that membership knows about the demands on which they are voting, the more comfortable and secure they will feel in voting YES. ‘No’ votes are often mere reflections of uncertainty. By erasing that uncertainty, by debating and discussing and getting into detail, we build a strong union and strong set of demands.

Significant discussion, details, and thorns went into the formation of this demand. With hourly work, we are presented with a question: What is a week? For a full-time worker, it might be forty paid hours. For a part-time worker, it might be twelve. That uncertainty is reflected in our vote which, though overwhelmingly YES, came with some hesitation. That hesitation is a path forward: MORE discussions, MORE meetings, MORE debate from MORE voices.

Our final demand is, so far, the vaguest. Time ticked by quickly in the meeting room, but, even without yet solidifying the details, a consensus was clear: We cannot continue to each do the work of many. As with our 3rd demand, this one leaves room for additional democratic engagement.

Demands as a Path Forward

We cannot rest on the success of our single meeting, nor on the selection of a few demands. Bargaining can be a long road even for established unions. For a first contract like ours, that road can be even longer. It may be months before the above-voted demands make it to the bargaining table. More demands will crop up in the meantime, to which we must respond as they happen. For example:

What counts as full-time? Is it thirty hours? Twenty-five?

How long is our probationary period for new hires?

Between now and economic bargaining, there will be countless chances and needs for more voting and for demands-specific escalation tactics. But the earlier in the process we are bold and upfront about our key demands, and the more organized we are in fighting for them, the more power we will have behind us.

When we make our demands clear, when we give those demands a number, we stick an expectation into the minds of workers and the minds of a community. We make sure that our coworkers know what we are fighting for. And when ownership or management balks at our request to lead decent lives, we will show the community exactly what their “community spaces” hold dear: not the workers, whose names and stories they know, but profit. We know that pressure works. If we don’t utilize it, we are acting as fools. As goes a cornerstone adage in the labor movement: “Power in the bargaining room comes from power outside the bargaining room.”

As we rise into a new era of worker’s rights and self-advocacy after generations of lull, how do we come to understand what demands we rally behind? How do we build a union when all the education we’ve received surrounding them has been rattled with disdain and parody?

This job matters to me. My coworkers matter to me. There is a pernicious myth surrounding food-service work: that it’s temporary and undignified, something college kids do to pay the rent. Something undesirables do, people with criminal histories and mental health issues and kids they have to raise on their own– as though these descriptors strip a person of their humanity. As though those people weren’t essential a year ago, while the CEOs stayed home.

Without us, the workers, the entire system would fail. My coworkers and I have become class conscious. We are one. Baristas with three degrees, line cooks with three kids, sixteen-year-olds on the register. We are all but different phases of each other.

When we fight, we win.