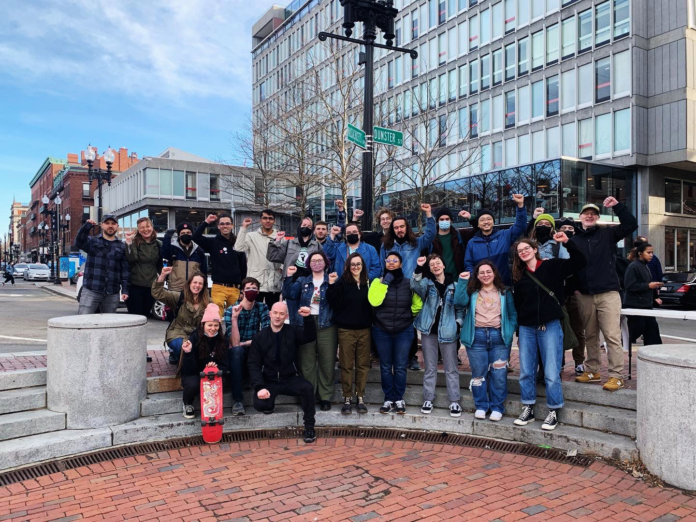 Workers at Starbucks locations across the Boston area and at several locally-owned coffee shop chains are building a vibrant unionization movement that shows the power of bold organizing.

On Saturday, Feb. 12, coffee shop workers, members of Socialist Alternative, and other supporters held a rally in Harvard Square before spreading out across Cambridge for a day of informational tabling to build support for the unionization movement. In one day, just over thirty people at eight tables gathered more than 500 signatures on a petition supporting the unions and calling for measures like a living wage before tips, predictable work schedules, and healthcare benefits including gender-affirming care for all workers regardless of full time or part time status.

“Momentum is on our side and we are ready to go,” said Hannah Smith, a worker at Darwin’s, Ltd.

Darwin’s is one of three local coffee businesses in Greater Boston where workers have won voluntary recognition of their union in recent months and are now fighting for their first union contract. Now workers at six Boston-area Starbucks locations have announced plans to unionize, as part of a dynamic wave of Starbucks unionizing efforts that has swept across the U.S.

Adrianna Ross, a worker at a Starbucks in Watertown, Mass. where workers have filed for union recognition, said she and her coworkers are fighting especially for a living wage and better benefits. These demands are crucial, especially as the cost of living skyrockets and Boston-area rents remain some of the highest in the country.

“We shouldn’t have to get second jobs in order to survive,” she said. “I know partners who have up to three jobs because they simply can’t afford to live where they are on just a Starbucks salary.”

Aaron Hunt, another worker from the Watertown Starbucks, said Starbucks corporate has claimed to care about workers and kept up their manipulative tactic of referring to workers as “partners.” But during the pandemic, workers have had to contend with customers who refused to wear face masks, some of whom can even be violent. All the while, the company’s CEO made $20 million in 2021 while the rest of the executive board has seen massive raises, and Starbucks’s overall profits in 2021 surpassed $20 billion.

“What I learned during the pandemic was that care only existed when it was convenient,” Hunt said.

Workers being tightly organized and community members showing vigorous support will also be key as Starbucks and other coffee workers push back against brutal union busting tactics from the bosses. In Boston, Starbucks workers plan to rally on Tuesday, Feb. 15 as part of a national day of action in protest of the firing of seven workers at the unionizing Starbucks in Memphis in early February. Actions like these are exactly what’s needed to force Starbucks to reinstate these fired workers. An NLRB ruling may come too late and do too little; Starbucks would rather contend with a legal slap on the wrist than an organized protest movement that disrupts business as usual and exposes their shameful union busting tactics.

“They can’t get away with it. We’re not gonna let this go,” said Ross. Starbucks corporate ownership may seem powerful, she said. “But we were the ones who gave them that power.”

Genevieve Morse, a union activist with the Massachusetts Teachers Association and a member of Socialist Alternative, said during the rally that she’s learned from years of organizing that workers must take ownership of their union and not buy into bosses’ propaganda that says unions are an outside organization.

The coffee unionization movement is a continuation of a trend, Morse said. Workers everywhere are fed up with subpar treatment, especially frontline workers who for the first months of the pandemic were hailed as heroes and are now being overworked in understaffed workplaces, without hazard pay. More and more, workers are turning to unions and tactics like strikes to demand what’s fair, as was seen in last year’s “Striketober” wave of large strikes. Each workplace that unionizes helps the movement snowball, she said, and shows bosses that workers are willing to fight together for what they deserve.

“You standing up for yourself helps all workers, not just the ones unionizing,” she told coffee workers.

Watch the livestream of the rally here!