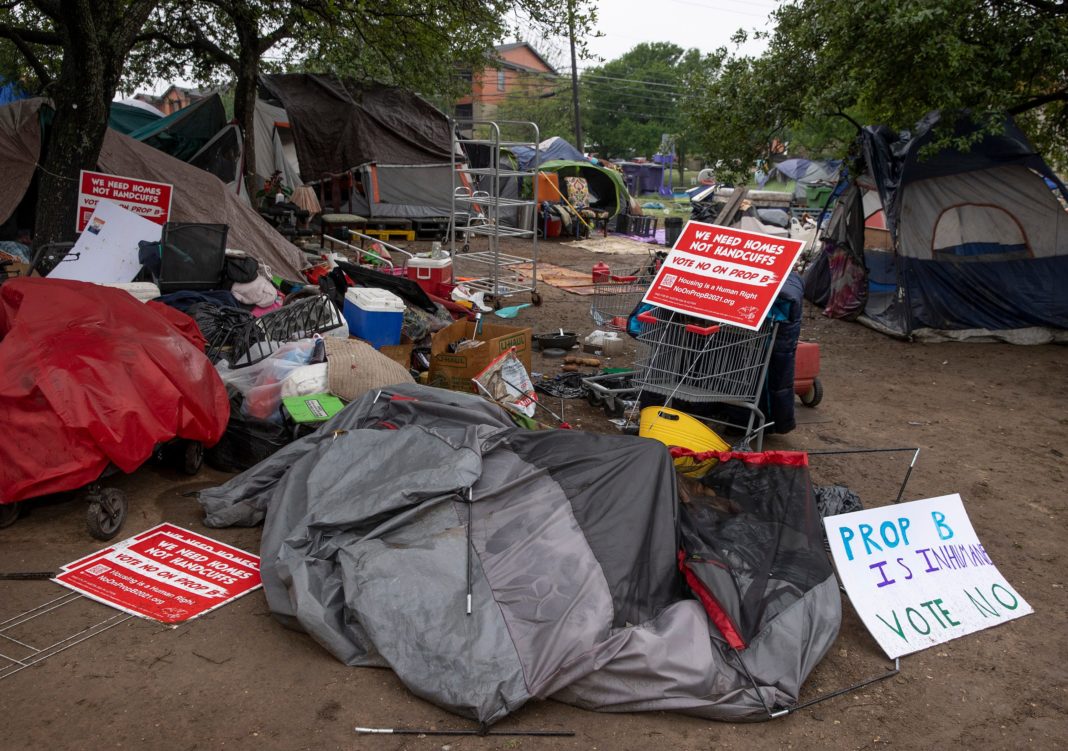 On May 1st Proposition B was passed in Austin, Texas, making it a criminal offense to sit, lie down, camp, or solicit money in public areas. Prop B went into effect on May 11th, making it a Class C misdemeanor, punishable by fine, to be homeless in downtown Austin.

Homelessness has been an issue in Austin for a long time, though this problem was exacerbated during the COVID-19 pandemic. As tech companies and out-of-town homebuyers flocked to the once small town, the cost of living has skyrocketed. Over the last year alone housing prices have gone up by 21%. Out-of-state buyers are offering well above asking prices, outbidding locals and making it almost impossible for working-class people to purchase homes. This is in part due to the commodification of housing under capitalism, though the real culprit is the increased financialization of housing in recent years. Real estate is increasingly seen as a speculative investment rather than an administration of human need, meaning luxury condos and high-rise offices remain empty while people sleep on the streets.

When the pandemic hit and so many people lost their jobs, the homeless population in Austin soared. With the rise in homelessness in Austin, we began to see rows and rows of tents lined up under bridges, next to highways and around downtown. With the onslaught of tent communities, the housing crisis in Austin became impossible to ignore.

In the midst of this crisis emerged Save Austin Now, a self-described “bipartisan citizens coalition, intentionally made up of a diverse set of Austinites including local Democrats, Republicans, and Independents as well as leadership from major Austin institutions like the University of Texas and Austin Police Department.” Save Austin Now frames the crisis as a safety issue, referencing a statistic originally cited in The Austin American-Statesmen, stating that “violent crimes with homeless suspects rose 10% in the last year.” Though violent crimes have risen, it is important to highlight the fact that the majority of these crimes are perpetrated against other homeless people, showing us that it is still the unhoused that remain most vulnerable.

Without the presence of a strong left alternative, Save Austin Now was able to capitalize on what many Austinites correctly identified as a crisis without adequate solutions. City Council Member and DSA member Greg Casar, who opposed Prop B was quoted saying, “The overwhelming majority of Austinites share a common goal, no matter how folks voted on Prop B. We all want to get people out of tents and into homes.” Criminalizing homelessness is not the answer, but neither is continuing down the path that we have been.

Though it was the right choice, voting ‘no’ on prop B was incredibly demoralizing because it was essentially voting on a nonsolution. Save Austin Now had the backing of both parties, big business, and key institutions but those who opposed the bill had little incentive to turn out. Prop B passed with 57.7% of voters in favor but only about 20% of people actually voted in this election. This is in part due to the fact that those who understood that criminalizing homelessness was not the solution were not presented with an alternative solution. There was no option to vote for adequate housing, better social services, or resource reallocation to pay for these much-needed services. Without a genuine solution on the table, a ‘no’ vote was still, in effect, a vote for no solution at all.

Since the passing of Prop B, the Austin City Council passed a resolution, Affordability Unlocked, championed by city council member Greg Casar. The plan would create 47,000 new units of affordable housing. However, the plan lacks 300 million dollars in funding. Further, Casar has already made the fatal mistake of allying with big business, as the plan relies heavily on the private sector, nonprofits, and philanthropy to make it happen.

What has been going on in Austin is not dissimilar to what has been going on in other rapidly growing cities across the United States. The Save Austin Now campaign’s talking points are reminiscent of those in the 2019 film Seattle is Dying, which painted what was at the time the worst homelessness crisis in the nation as the fault of individuals, instead of the inhumane for-profit housing system. Kshama Sawant, Socialist Alternative member and Seattle City Council member, was running for re-election at the time of the movie’s debut.

Kshama and Socialist Alternative recognized the housing crisis as a systemic issue and put forth an alternative solution, running on a platform of rent control and taxing the rich to fund affordable housing and social services. Kshama went on to build a movement that won a historic Amazon Tax to fund affordable housing, additionally winning landmark renters’ rights laws such as the guaranteed right to counsel for those facing eviction. As long as she has been in office, Kshama has operated with a clear understanding that big business, both political parties and austerity-driven anti-homeless measures offer no real solution to the housing crisis.

To address the homeless crisis in Austin and the rest of the nation, we need a socialist plan that takes on the real estate industry, private developers, banks, and mega-landlords who endlessly drive up the cost of housing for their profit. Building affordable housing and sustainable solutions requires us to reject profit-driven, market-based solutions and instead opt for a socialist program that can meet the needs of working people. A socialist program would include:

2.     Immediate expansion of shelters and transitional housing for those experiencing homelessness, including wrap-around social and rehabilitation services

3.     A tax on the rich and big business to generate the funds needed to create permanently affordable, green housing

4.     Democratic planning based on public ownership to ensure affordable, stable, quality housing for all!