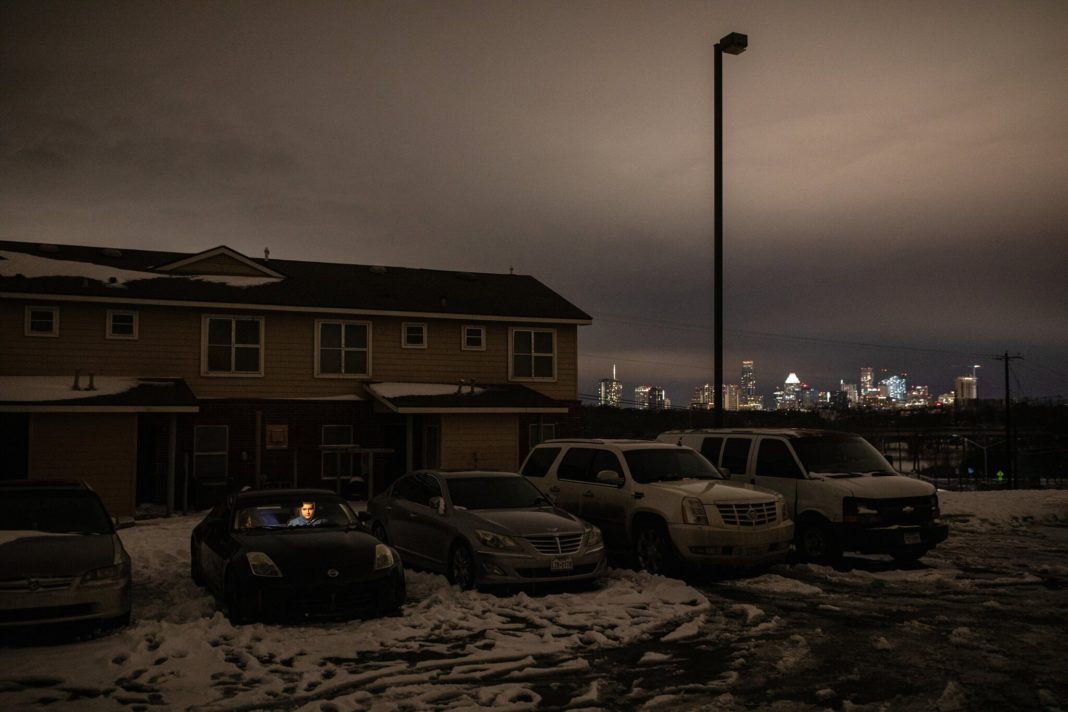 Capitalism left working people to die in the Texas cold, and the ensuing crisis exposed the complete inability of the free market to provide for people’s survival.

Last week, as a historic winter storm hit much of the United States and temperatures plummeted far below freezing, blackouts began to roll across the Texas power grid. At their peak, the blackouts left more than four million people, largely working families, without heat and electricity during the coldest temperatures in decades. In many parts of the state, temperatures dropped to near 0ºF. It quickly became clear that the projections by the state’s electric power grid operator, the Electric Reliability Council of Texas (ERCOT), that rolling blackouts would last approximately 40 minutes were completely inaccurate. Many working people faced blackouts and water outages lasting days in homes ill-equipped to deal with such low temperatures. Unable to seek shelter elsewhere due to icy and snow-covered roads, some were forced to take desperate measures, such as sleeping in cars or burning personal possessions for warmth. Some packed into makeshift warming centers, as the need to get out of freezing temperatures overrode concerns about social distancing during the ongoing COVID-19 pandemic. In one Socialist Alternative member’s home in Houston, indoor temperatures dropped to 37ºF. Temperatures inside another member’s home in Nacogdoches dropped so low that her father got frostbite.

The toll on working people across the state was brutal, with at least 30 deaths in Texas as a direct result of the winter storm and shortages of food and clean water across the state still ongoing days later. Meanwhile, reactionary politicians like Ted Cruz jetted off to warmer climes like Cancún or used expensive whole-home generators for heat.

While there were technical failures at every level of Texas’s energy system, from frozen natural gas wells and pipelines to ERCOT’s failure to account for climate change’s impacts on weather in projecting electricity demand, the roots of the disaster lie in the structural failures of the capitalist system that prioritizes corporate profits over providing heat to working people.

Capitalism is both driving the climate change that makes catastrophic weather events such as the winter storm in Texas more frequent and intense and failing to build the infrastructure necessary to withstand these severe weather events. Capitalism’s destruction of the natural environment and its role in driving climate change are particularly evident in Texas. Texas is home to many of the world’s largest fossil fuel corporations, such as ExxonMobil, and to the so-called “Energy Capital of the World,” Houston.

The Permian Basin, in West Texas, is one of the largest oil and gas production regions in the United States.The energy industry exerts enormous political and economic clout in Texas and ensures that fossil fuels and other extractive industries remain dominant even as they wreak global ecological destruction. Hurricanes Harvey and Maria, which struck Texas and Puerto Rico respectively in 2017, the catastrophic fires in Australia and on the west coast of the U.S. in 2020, and now the historic winter storm that hit Texas in 2021 are all examples of natural disasters made far worse by capitalism. As global temperatures increase unchecked, fires become more common, ocean temperatures increase, producing more intense hurricanes, and warming in the Arctic influences extreme weather events globally, including the winter storm in Texas. Even the origins of the COVID-19 pandemic are rooted in capitalism’s relentless encroachment on natural habitats.

Even as capitalism’s inexorable drive for accumulation precipitates extreme weather events, it also undermines crucial infrastructure, making it more prone to the sort of critical failures that occurred in Texas. As temperatures plunged and demand for electricity surged, electricity generators supplying the Texas grid began to fail due to winter conditions. This shortfall in generation, peaking at about half of Texas’s generating capacity, led to the days-long blackouts implemented by ERCOT. They later admitted to being mere minutes away from an uncontrolled blackout that would have devastated the grid, potentially for months.

While Texas Republicans rushed to blame renewable energy sources, and it is true that some wind turbines did ice up, the vast majority of the lost capacity was due to the failure of coal, nuclear, and natural gas plants, which supply the bulk of Texas’s electricity in the winter. These failures were the result of the deregulated, decentralized, and privatized energy infrastructure in Texas. Texas’s electricity grid is largely cut off from the grids in surrounding states in order to avoid federal regulations.

In 2011, another winter storm produced rolling blackouts in Texas. A federal report commissioned in the wake of that debacle made numerous recommendations for upgrading and weatherizing Texas’s energy infrastructure but, in Texas’s deregulated system, privately-owned energy companies were left to voluntarily implement the critical changes. Many did not, unwilling to eat into profits to invest in backup capacity or more resilient equipment. When generation in Texas failed, grid operators were unable to import electricity from surrounding states because of the isolation of Texas’s grid.

Under capitalism, the purpose of energy and utility companies is not actually to provide energy and utilities, but rather to generate profit. Many of the same recommendations made in 2011 were made in 1989, after another winter storm, and similarly went unimplemented as energy companies prioritized profits over providing reliable power. Ed Hirs, an Energy Fellow at the University of Houston, told the Houston Chronicle that Texas’s grid “limped along on underinvestment and neglect until it finally broke under predictable circumstances.”

Addressing the systemic causes that led to millions of working people being left without heat and water when they most needed it will require solutions outside of the capitalist profit-motive. For-profit energy companies have no incentive to provide reliable infrastructure during periods of abnormal energy demand like freezing weather in Texas, even as such events become more common.

Infrastructure in the United States is already deteriorating due to lack of investment. The vast majority of U.S. infrastructure was built decades ago with the expectation of more stable weather patterns. As the impacts of unabated climate change continue to intensify, infrastructure failures like the blackouts in Texas will likely become even more frequent across the country. The Biden administration has indicated that an economic package including significant infrastructure investment will be a priority after the coronavirus relief bill. The recent disaster in Texas shows the need to take bold steps on infrastructure. However, Biden’s infrastructure plan does not include new revenue generation and will likely face stiff opposition from Republicans and some Democrats. Sustainable, eco-friendly new infrastructure is an urgent priority, and should be funded through new taxes on major corporations and billionaires, who are driving the climate crisis.

Images of downtown skyscrapers in Texas cities lit up at night as working people faced freezing temperatures without heat, light, or water served as a potent symbol of the deep inequality in society. But the fact that the power outages closed businesses and left millions of workers sitting idle was a debacle even for many corporations. Corporations require reliable infrastructure to ensure continued economic production just as working people require it for heat, water, and other necessities of life. The fact that capitalism, after decades of neoliberal deregulation and privatization, is unable to provide that reliable infrastructure is a manifestation of the extent to which it has ceased to develop the productive forces of society and instead become a fetter on them.

A Socialist Response to the Crisis

To meet the needs of working people, we must take the energy companies into democratic public ownership and run them using rational planning for the benefit of society. ERCOT should be brought into democratic public ownership and integrated with publicly owned energy companies and utilities. This would allow workers and the community to make crucial decisions, like whether to winterize equipment and how to distribute power, rather than leaving it to the whims of unaccountable corporations in a market system.

These changes must be part of a Green New Deal to quickly address the crisis of climate change; the market has repeatedly shown itself incapable of undertaking the necessary changes before it’s too late. It will take centralized planning, democratic control by workers and the community, and a Green New Deal jobs program to make a rapid transition to reliable alternative energy and a modern electricity grid, update and weatherize infrastructure for extreme heat and cold, build new, energy-efficient affordable housing, and expand public transit. To pay for these vital programs, we should tax the corporations and billionaires that have created the problems in the first place.

Both the Republican and Democratic parties are beholden to the corporate interests that are responsible for climate change and our failing infrastructure. Similar deregulation of the energy industry in Texas has taken place under Democratic administrations in California, and has contributed directly to devastating fires in that state through the negligence of for-profit utility corporations like Pacific Gas and Electric.

To win a Green New Deal and build infrastructure that works for working people, we must build on the youth climate movement that has brought millions around the world into the environmental struggle in recent years. Unions have a key role to play in driving this forward and should immediately join the call for a GND jobs program, including calling for the retraining of workers in polluting industries into guaranteed jobs in renewable energy.

We can bring together student climate strikers and workers in the energy sector by building a new political party that breaks with corporate interests and fights for working people. An independent working class party of struggle could win concrete victories like the Amazon Tax used to fund Green New Deal projects won by Socialist Alternative and socialist city council member Kshama Sawant in Seattle. Ultimately, we must do away with the rotten system of capitalism altogether and build a society run on a democratic and sustainable basis, a socialist society.