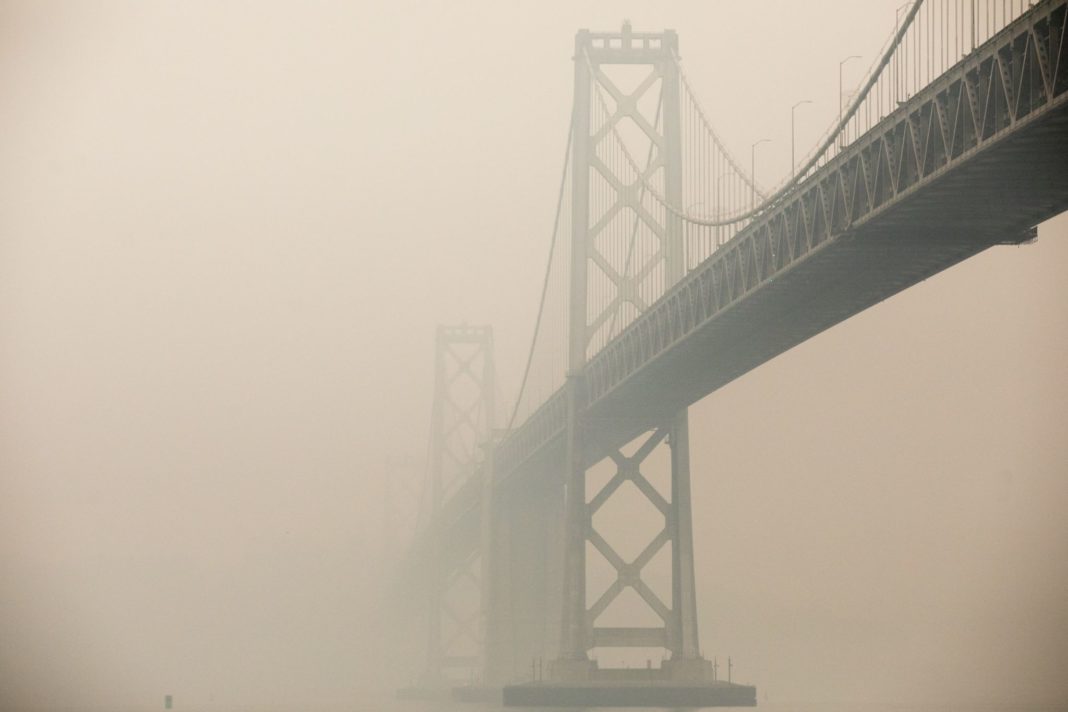 Photos of an eerie, dark orange sky covering Oakland, San Francisco, and other Bay Area cities circulated the internet earlier this month, as winds carried smoke from 6 of the 20 largest wildfires in California’s history, high up into the atmosphere and towards the ocean. The next day, the smoke and soot dropped down to blanket the area, causing the air quality index to skyrocket into the “Very Unhealthy” range.

The speed, scale and intensity of these fires have shocked scientists and firefighters alike. California’s early-arriving fire season has now razed 3 million acres and counting. In Oregon, half a million people were on standby for possible evacuation, as fires there have scorched over 1 million acres, around twice the past decade’s yearly average. Like California, the fires in Oregon came on super fast, with most acreage burning in just 72 hours. Climate change is not about tomorrow, it’s about today. And the current air quality crisis in the Bay Area is a further reminder that you cannot opt out of global warming. An evacuation from a fire could be a 5 mile drive, an evacuation from toxic smoke is more likely to be a 500 mile drive. This is California as we face a likely hotter and drier than usual Fall.

Fear of long-term health impacts from smoke inhalation is being stacked on top of anxieties working people are already facing with the mismanaged COVID-19 pandemic and layoffs. Millions of renters nationwide also face the looming threat of evictions as they are forced to choose between paying for healthcare or shelter, or unable to afford either. And California’s 150,000 homeless have had few places to go to avoid the toxic air quality.

Lack of Shelter, Electricity, and Healthcare

Smoke from some of the largest fires in California history has been coupled with record-breaking heat, in many areas exceeding 110 degrees! Renters with window mount A/C units often struggle to keep up with the sustained high temperatures as is. PG&E, California’s for-profit utility company, shut off power to hundreds of thousands of households in Northern California on Labor Day, and put many others on alert. Loss of A/C under extreme temperatures can result in rapid indoor heating, and opening the windows for air circulation results in smoke exposure. The combination of toxic smoke and high temperatures puts even healthy individuals at risk, but the possibility of a shut off can be life threatening for people with a range of chronic illnesses including heart disease and asthma, leaving our most vulnerable and their families in a constant state of worry.

The smoke from the wildfires doesn’t affect everyone evenly. The impossible choice for cash-strapped renters pressured to choose between shelter and healthcare, in a society where the ruling class is unwilling to guarantee either, results in some facing the smoke with either undiagnosed or undertreated cardiovascular and respiratory illnesses, or with no shelter at all for those forced onto the streets. If you’re lucky enough to be able to afford an air purifier and live in a well-maintained home with windows that seal all the way, you may be able to protect yourself from the worst of it. If you live in an older apartment with drafty windows and busted seals, you don’t have many options. Renters we’ve talked to are dealing with landlords who refuse to fix serious mold issues, in the middle of a pandemic, while the toxic smoke outside keeps them confined to a toxic environment indoors.

PG&E, found negligent in past massive fires, still hasn’t gotten its act together and made its equipment safe. Its haphazard, profit-maximizing strategy cuts corners on safety upgrades and skimps on vegetation management in areas with high wildfire risk, instead relying on dangerous “Public Safety Power Shutoffs.” State negotiations with PG&E have been overly focused on the utility getting its finances in order. They can’t be trusted to put our livelihoods first. It’s time we took PG&E under public control, to guarantee safe, reliable, green energy for all.

The fuel for the fires that have covered the entire west coast in unhealthy to hazardous smoke is the massive amount of dry vegetation and dead trees resulting from severe droughts and rising temperatures over the past decade. Droughts have become more severe and likely to occur due to global warming, caused primarily by growing carbon emissions that the 1%, who are obsessed with profit-taking, have failed to check. In addition, according to the Financial Times, the 5 million acres burned on the west coast have pumped an estimated 110 million tons of carbon dioxide into the atmosphere, further accelerating global warming.

The heat from the Creek Fire in the Sierra National Forest caused smoke and water vapor to rapidly rise into the atmosphere, creating a massive thunderhead cloud formation – over 45,000 feet high. The “pyrocumulonimbus” cloud was possibly the largest such formation in U.S. history, creating its own weather system and making the fire more difficult to fight by generating wind gusts, and increasing risks of lightning strikes that can start new fires. This is akin to the  devastating Australian bushfires which also generated a number of these clouds, which shot massive plumes of smoke into the stratosphere, where they were trapped, circling the globe for months.

While there’s nothing wrong with trying to reduce your carbon footprint by trying to reduce food waste, or installing LED light bulbs in your home, advice that focuses on individual lifestyle changes distracts from the source and sheer magnitude of the problem. Many big businesses have grown exponentially out of exploiting green consumerism. Two-thirds of carbon emissions are generated by just 90 companies globally. Individual action will get us nowhere near where we need to be to start addressing this climate crisis, or even prepare us for next year’s fire season.

Democrats do acknowledge the science of climate change. However, they have shown in states like California, where they have a supermajority in the state capital, that they lack the political will to take the serious, long-term climate action that would have been needed to lessen the severity of the wildfires. They weren’t able to adequately prepare for this year’s fire season based on clear lessons from the past three fire seasons. Even a bill calling for a reduction in single-use plastics by 2032 has failed to make it through the legislature, for the second year in a row, after politicians were swayed by plastics industry lobbying. Another bill to curb the growth of new oil wells by keeping them 2500 feet from schools also failed to make it through this latest round of legislation at the state capitol. Big oil, fracking interests and plastics manufacturers spend millions to get their way at the State capital.

Touring the North County Complex Fire zone, Governor Gavin Newsom, the guy in charge of California, called this crisis a “climate damn emergency”. He didn’t mention that he also cut firefighter’s pay earlier this year, refused to hire even a fraction of the firefighters needed, and quietly approved 12 new fracking permits in early June. While California billionaires’ wealth has exploded, the Governor has ruled out using that wealth for climate change, pledging “not to sign any of the proposals to increase income taxes on the wealthiest Californians that were floated at the end of the legislative session”.

The bosses’ political left arm, the Democratic Party, up and down the ballot, are yet again showing they are incapable of providing solutions for us, while forcing working people to pay for a crisis caused by billionaires, and letting Newsom’s 1% friends and backers off the hook for the bill.

We need a comprehensive plan to prepare for the yearly fire season, led by democratic committees, that can take lessons from indigenous fire management strategies and the latest in climate science. This would include hiring more firefighters and launching a massive public works program tasked with wildfire prevention.  Instead of advocating for “individual” solutions to climate change, we need to organize mass struggles for bold measures like clean, zero-fare public transportation, taking the top 100 polluters under public control, and building a more efficient electric grid, powered by 100% emission-free, renewable energy sources. We must continue the fight to cancel rent, and build high-quality public housing to protect renters and the currently homeless from the smoke and worsening effects of climate change.  The rich need to pay their fair share too, through a massive tax on big business and the wealthiest individuals.

It’s clear that corporate politicians, and the interests they serve, will continue to be a roadblock to the climate movement and our demands. We need to build our own party, of and for working people, that takes no corporate money, and can therefore actually fight to address the underlying causes of the smoke filling our skies.

Ultimately our fight for a green society will need to go after the capitalist system, the root cause of the climate crisis.