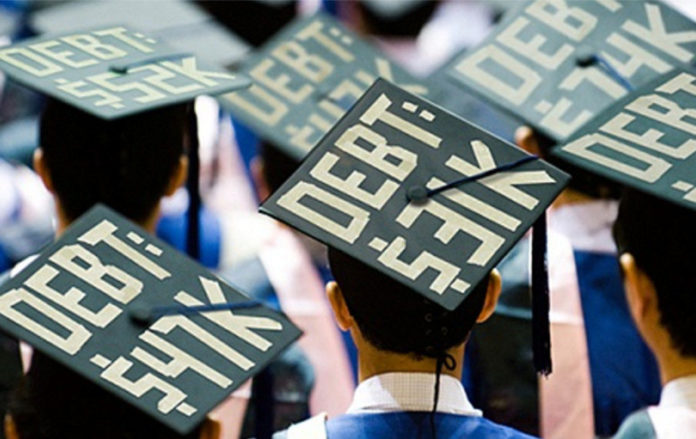 2021 has begun with a bad joke of a stimulus bill, rental costs maxing out credit cards, and an unchecked pandemic once again overwhelming our healthcare system. Now, with the new stimulus failing to extend the payment freeze on student loans, an all-too familiar crisis returns to add fuel to the fire raging through working people’s lives.

As the Democrats are set to take control of both halls of Congress and the White House, calls to cancel student debt have grown. Biden has signalled that he will look to cancel up to $10,000 of federal loans, but has hedged on using the full extent of his executive powers. However, with other Democrats like Elizabeth Warren and even establishment gatekeeper Chuck Schumer pushing for more and a growing financial crisis for millions, the cancellation of student debt through executive action is shaping up to be one of the first tests of a new Biden administration.

A Crisis With No End

The fight to cancel student debt is not a new one. When Warren and Bernie Sanders introduced it into their platforms in 2019, it was after years of grassroots organizing by groups like the Debt Collective, led in particular by former for-profit college students.

Forty-three million Americans hold over 1.6 trillion dollars in student debt. That is the largest bucket of debt in America behind mortgages. In response to the pandemic, Congress deferred payments for those with federally backed loans, but those with student debt understand that this is simply kicking the can down the road. And that can is about to explode. More than 30% of borrowers are either in default, late on payments, or have stopped making them six years after their graduation. Even if borrowers are able to avoid the negative credit reports and wage garnishments that are the dire consequences of default, over half report that they have put off major life events like marriage, major purchases, and saving for retirement because of their student debt.

Unlike getting out of an underwater mortgage, there is no possibility of relief from student debt. There is no foreclosure, no asset to leave the banks. If and when you default on student loans, you stare down a future of the government coming for your wages, your tax refunds, and even your disability payments and social security. This is the crisis of student debt.

Establishment Democrats have sought to discredit the demand for student debt cancellation by claiming that this would benefit wealthy students who can afford to pay off their loans. This was the logic behind Elizabeth Warren’s limited debt cancellation proposal in the Democratic primaries. In reality, this argument is a strawman that is used to introduce all sorts of corrosive means testing mechanisms to limit giving people needed aid. A movement to cancel student debt would fundamentally be a movement for working class people of color and women. Women carry nearly 2/3 of the total student debt and on average borrow more money than men. Similarly, 85% of Black bachelor’s degree recipients carry student debt compared to 69% of white recipients and their average debt is higher.

While student debt has more than tripled since 2007, the idea of funding higher education through personal debt is a phenomenon closely tied to the birth of neoliberalism in the 1970s and 80s, which ushered in an era of privatization and defunding of public services.

Within his first year in office in 1981, Ronald Reagan tightened eligibility requirements for Pell Grants, increasing the expected contribution of parents from 10% of their discretionary income to 40-55%. The accessibility of Pell Grants fell dramatically, and federal loans stepped in to fill the gap. 1984 would mark the last year students could expect more from grants than from loans. The federal government was out of the helping-students-go-to-college game and was diving headfirst into the college loan business. This was a profitable venture thanks in no small part to the junior Senator from Delaware Joseph Biden who had, in 1978, fought to exempt students from bankruptcy protections for at least five years after the student graduated. This shift towards loans not only turned students into substantial revenue sources for the federal government, it transformed the private lending and debt collection industries into profit-making machines for Wall Street.

By 1996, Sallie Mae, originally created as a government sponsored enterprise to service student loans, was privatized by Congress. As a result, the now private financial behemoth held the power to, itself, issue federally guaranteed loans, the power to acquire other loaning companies and debt collection agencies, and, for the first time, to make private student loans that commanded much higher interest rates and greater profits. Not one to miss an opportunity, investment firms on Wall Street were quick to enter the fray. By the early 2000s, for-profit schools were booming, as investors saw huge potential for profits with little risk following the deregulation of the industry by George Bush’s Department of Education. Within ten years, on the back of vicious marketing campaigns, for-profit enrollment had increased by over 300%. The formula was simple: the more students they recruited who were eligible for federal loans, the more profits they made. Not only did these institutions provide a shoddy at best to fraudulent at worst education, they engaged in some of the most predatory lending schemes imaginable, disproportionately targeting black students.

The rise of the student debt industry would not have been possible without the accompanying attacks on funding for public education. Throughout the 1980s and 90s, higher education was severely impacted at all levels of government by budget cuts and austerity. Students’ own tuition dollars became the primary funding source for public universities. As a result, college costs began to boom.

Between 1980 and 1998, public school tuition increased by almost 40% from $7,770 to $12,210. With less cash coming from the government, the student loan industry stepped in to fill the void, effectively subsidizing public education on the backs of its most vulnerable students. Then came the Great Recession and, with it, increased austerity. States cut funding drastically while increasing tuition in order to recover their losses. As a result, while tuition has increased by over 25% at private institutions, public higher-ed has increased tuition by almost 30% over the past ten years, a rate of eight times that of real wages. It is no surprise then that student debt has more than doubled to over 1.5 trillion compared to 671 billion in 2008.

While students take out loan after loan, burdening themselves in a lifetime of debt, universities burn through millions of dollars building state-of-the-art athletic centers, luxury dorm buildings, and other ridiculous amenities all in an attempt to attract more and more students funded by debt. Students are no longer students, but consumers to be milked for all their worth. This extreme race to the top (in reality to the bottom) has caught the attention of developers and the finance industry. Universities themselves are in debt. In turn, they look to public-private partnerships to finance new dorms and student centers, pledging the tuition of students decades to come. These relationships with the finance industry can lead to grotesque scenes like the one that happened this summer in the University of Georgia system. At the height of the COVID pandemic, administrators received letters from the private developer that built and runs their student housing pressuring them to return to in-person school. The letters reminded the University of their 548 million dollar debt, and suggested that they might want to return students to school in the middle of a pandemic lest that debt become a problem.

Despite increased popularity of calls from the likes of Chuck Schumer and Elizabeth Warren for President Biden to cancel $50,000 of debt, Joe Biden has answered the movement with crumbs. The Biden campaign is backing legislation to cancel $10,000 in federal student loan debt. For some, this money would mean quite a lot, however, for those people most hurt by the crisis it would be a drop in the bucket.

No matter how many times we appeal to Joe Biden’s better angels and point out the ease through which he could use his executive power to cancel all student debt, he will not do it. Not only did Biden set the stage for the student loan industry in 1978, he was also a key player in passing a 2005 bill that stripped students of bankruptcy protections. Already, he has begun to hedge against campaign promises by suggesting he does not have the authority to use executive orders. But with the Democrats now set to take power in both the House and the Senate, Biden’s cover grows thinner.

A movement to cancel student debt cannot be restricted to technocratic appeals to executive orders and it cannot rely on a president and two political parties with long records of slashing funding for schools and forcing students into debt for our education. To win true student debt cancellation will require a mass movement that includes more than just students. In order to build that movement, debt cancellation groups must link up with unions, affordable housing groups, and low-paid workers on and around campuses to take the fight to the underlying systemic issues in higher education. In order to ensure student debt does not return, the movement must take up the fight for free college for all, paid for by taxing the rich.

But we must be clear, at its core, the fight to cancel student debt is the fight against a system that places its bottom line over its people. Student debt is a glaring and obvious symptom of a larger problem. The chronic underfunding on all levels of our education system reveals the fundamental shortcomings of education under capitalism. Truly equitable and quality education is only possible under a socialist system built by working people for working people.