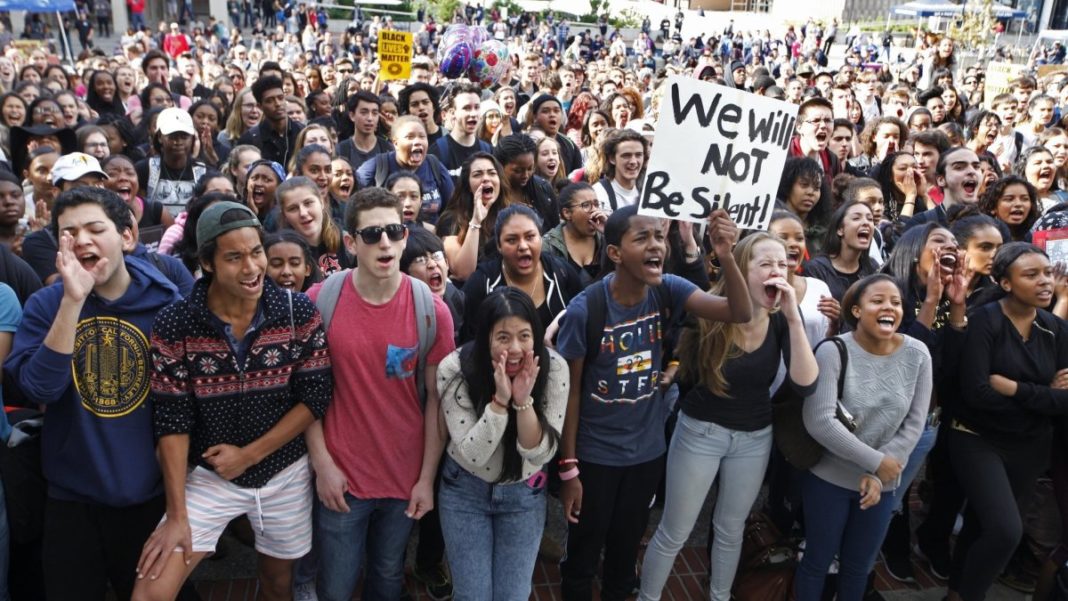 Youth today are facing a broad and deep capitalist crisis. Brutal austerity measures have stripped funding for education, student loan debt and the cost of housing continue to rise, our healthcare and mental healthcare systems are broken, and youth unemployment levels are the highest ever since the Great Depression. We have grown up in an era of major recessions, rapidly worsening ecological consequences of climate change, and now a global pandemic.

The Most Progressive Generation Yet

Yet high school students, those of us that will inherit these struggles that we had no part in creating, can’t vote. Today’s youth are the most progressive generation. Many of us have been won over to radical and socialist politics by seeing first hand capitalism’s contradictions and the government’s failure to solve them.

Polls of high schoolers’ political attitudes are hard to find, which indicates how marginalized our views are. High school students have similar political attitudes to 18-29-year-olds, who overwhelmingly supported democratic socialist Bernie Sanders in exit polls of almost every state where the age group was surveyed. In 2016 a survey of college freshmen found that 80% of students wanted climate change addressed and 71% would tax the wealthy more. It is possible that Trump wouldn’t have won the presidency in 2016, and would have been more decisively crushed this election, had 16 and 17-year-olds been able to vote.  Early in the 2020 primaries, polls indicated that Biden had as little as 2% support among young people who favored Sanders’ bold and progressive platform. In the general election, however, there were record levels of youth turnout for Biden revealing the extent to which young people wanted Trump and his right-wing racist agenda out of office. In several battleground states, there was a 10% increase in the youth vote which was crucial to Biden’s victory. If ーinstead of uninspiring moderate Joe Bidenー there had been a progressive candidate who young people were genuinely enthusiastic about, they would foreseeably have mass mobilized to fight for a platform they believed in and played an even larger role in the general election.

Youth at the Helm of Social Movements

The youth have historically played a big role as activists in social movements. In the 19th-20th centuries teenagers who worked under extremely harsh conditions and long hours united with other workers in labor struggles. In the Lowell Mill walkouts of the 1830s, thousands struck, against fierce opposition from their employers, to demand higher wages and better conditions. During the Civil Rights Movement, teenagers were often on the front lines of important protests, participated in sit-ins and boycotts, and led school walkouts to protest segregation.

In the past 15 years, high school students have led walkouts against the U.S. invasion of Iraq, participated in Occupy Wall Street, marched for the rights of immigrants, protested the murder of Trayvon Martin, and organized March for Our Lives to end gun violence. Today, youth activists are at the helm of global movements like the Black Lives Matter and the climate movements. High school students continue to organize and lead protests against police brutality and systemic racism. Young Black activists are bringing the fight to their communities, schools, and police departments. Frustrated with a lack of action against climate change, youth like 16-year-old Greta Thunberg have taken up the struggle for climate justice, calling out corporate politicians for their complacency. In the U.S., young people are driving conversations about progressive climate policy like the Green New Deal. The voting age should be lowered to 16 immediately to ensure that youth have voices in government at the national, state, and local levels.

Lower the Voting Age and Then Keep Fighting

Young people’s political views and ideas have consistently been decades ahead of older generations. Consequently, the political establishment views 16 and 17-year-olds as a threatening force to give a voice to in elections. Disillusioned young people spearhead anti-establishment votes, representing a real danger to defenders of the system.

Already, young voters face many obstacles in casting their ballots. Registration processes are difficult as young people tend to be more transient and move between apartments. College and university students that study away from home need to establish residency in their new locations to register. ID requirements for young voters are also restrictive, many states deny student IDs as valid identification at the polls. Polling locations are harder to access for students who are less likely to have cars, and who find it hard to find time to travel and wait in lines for hours when they have jobs or busy class schedules. While youth voter suppression has long been a pervasive issue in both red and blue states, new laws targeting young voters have emerged since the 2018 midterms which experienced enormous levels of youth voter turnout. Despite these hurdles and concerns over the coronavirus, there was record youth turnout in the 2020 election. Part of this increase can be credited to the wider availability of early and absentee ballots which is how 70% of young people reported voting.

The capitalist class won’t easily give in to demands to lower the voting age. Large-scale organization and pressure from the working class and young people will be necessary to lower the voting age and give youth a political voice. Youth and social movements should take up the demand to give 16 and 17-year-olds the right to vote and support their movements and progressive politics in local state and national elections.

We Need a New Party for Workers and Youth

Lowering the voting age alone is not enough to solve the massive capitalist crisis that young people face today. We cannot be satisfied with only passive engagement in a capitalist democracy, voting every so often for establishment Democrat or Republican candidates who don’t represent the interests of the working class and youth. While left challengers to the Democratic establishment are growing in the Democratic Party, the party remains dominated by big business interests. The lack of a real working-class alternative has allowed party leaders to preserve the facade that the Democratic Party is a “lesser evil.” To win real progressive changes, we need a new working-class party. A party of workers and youth, independent of corporate cash that collaborates with social movements rather than working to placate them.

Young people would not be limited to simply voting for such a party, but would be actively participating to develop its platform and strategies. Even before winning the right to vote for 16-year-olds, we could play a decisive role in the struggles waged by this new political force. A truly independent workers party would avoid the pitfalls of “lesser evilism” or adopting a political program more acceptable to Democratic leaders to win their endorsements or elections. It would unapologetically fight for a Green New Deal jobs program, an immediate and rapid transition to 100% renewable energy, Medicare for All, a cancellation of student debt, democratic control over local police departments and full funding for our schools. It would fight to tax the rich to fund social services, and take money out of bloated police budgets and the multi billion dollar military budget to fund the things working people and youth really need.

It is necessary to build this new party on a clear left platform, using its campaigns to openly fight for left and socialist ideas that mobilize working people and youth into struggle. Therefore, while the youth need the right to vote, we also need to continue — united with workers — to participate in active forms of political struggle. Active struggles relying on young and working people are the only tools capable of actually rebuilding society and achieving the fundamental change we need.