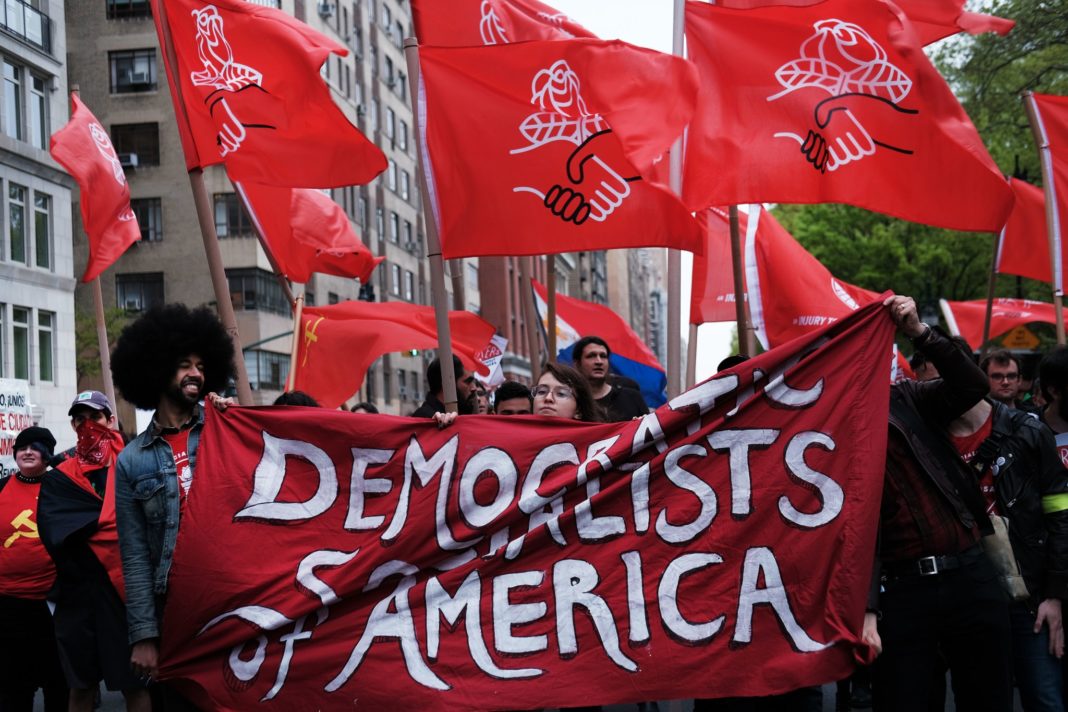 We are in a new historical period, and socialists must adjust to this deeply changed situation. 2020 will be remembered as a crucial turning point worldwide with the pandemic, economic crash, the biggest protests in U.S. history after George Floyd’s racist murder, and of course the end of the Trump regime.

Biden’s administration will be overseeing multiple historic crises of capitalism, including economic, environmental, and social devastation. Many working people are staring down the bleakest conditions they or their families have ever encountered. Despite the likelihood of a shallow Biden “honeymoon,” political polarization will continue, and explosive struggles will eventually come into conflict with the Democratic Party leadership. Trump is out, but Trumpism is not going away, and the far right will work hard to exploit anger at the corporate-controlled Biden White House. In this situation, it is all the more urgent that the socialist left build a viable alternative to the Democratic Party and its ruling class leadership.

There are monumental tasks on the shoulders of socialists: we need to urgently rebuild a fighting and democratic labor movement, struggles against oppression, and lay the foundations for a new mass working class party in the U.S. In this context, the building of a broader socialist movement, based on unity and comradely debate over theory, strategy, and tactics will be absolutely crucial. All trends on the left will be tested by tumultuous events while facing attacks from both the far right and the Democratic Party leadership. At the same time, there will be profound opportunities to build support for working class methods of struggle and the ideas of Marxism.

Growth of the Socialist Left

In the past four years, DSA has grown dramatically, and a new generation of socialist activists have changed DSA for the better. Socialist Alternative has always been excited by DSA’s growth despite our political differences with some of DSA’s leading voices.

The working class needs a mass political party with deep roots in society, and history tells us that such a party or a wider new left organization will not come as a result of the linear growth of revolutionary groups. While we don’t expect that DSA on its own can rapidly become a viable new left party, sections of DSA can become an important force in pushing this process forward

It is not automatic that all DSA members play a positive role in this historic task to develop working class power. For instance, we’ve seen DSA Alderman Andre Vasquez vote recently for an austerity budget in Chicago and an ensuing debate about his status as a DSA member and elected official. It is notable that Vasquez justified his vote based on the argument that he was able to negotiate improvements with the city’s establishment mayor. But basing elected office on this backroom negotiation approach, rather than building movements, will lead only to more capitulations and betrayals.

These tests will become more and more frequent as the crisis intensifies with the Democratic party presiding over austerity and a historic crisis of capitalism. Patient, comradely debates on key issues about how to most effectively defend the interests of the working class will be needed alongside bold initiatives to build the socialist left on a clear class-struggle basis. We think that Socialist Alternative has a lot to offer in helping to build DSA while contributing to the debates on how to bring forward the wider workers’ movement.

Socialist Alternative’s experience in Seattle includes three election victories against the Democratic Party leadership with Kshama Sawant running as an open, independent socialist every time. We’ve used Kshama’s office to initiate and help lead the movement that won the “Amazon Tax” this year, which will amount to a $2 billion transfer of wealth from big corporations to ordinary people over the next decade, and the first successful fight for a $15 an hour minimum wage in a major city in 2014. This is only a sampling of the victories Kshama and Socialist Alternative have helped win with a class struggle approach.

Winning these victories was only possible because we based ourselves on using our elected office to build fighting working class movements rather than on back-door negotiations with other politicians. This is a fundamentally different approach, unfortunately, than some DSA-backed elected officials who look to keep peace with the Democratic establishment.

Through our bold, independent campaigns, we have proven that independent politics can win elections and help to popularize in practice the idea of a new, independent, working class party. This path is not easy and leads to attacks from the ruling class, and we’re not afraid to be an enemy of the richest man in the world. Because of the enormous impact we’ve had with one independent elected socialist in office, our seat is currently being threatened by a racist, billionaire-backed recall campaign, and it’s going to take the full weight of the socialist movement in Seattle and nationally to beat it.

Socialist Alternative is an explicitly revolutionary Marxist organization that asks for a high level of commitment, accountability, and political engagement from our members (and especially our public figures and leaders). We are organized on the basis of democratic centralism which, simplified, means full freedom of discussion and unity in action. This unity in action allows our members to have a bigger impact in movements by putting forward consistent and thoughtful demands, next steps, and priorities for struggles. At the same time, we have robust debates within the organization that aim for political clarity while learning from the broader working class.

To take one example, Socialist Alternative debates our election strategy and our platforms collectively, votes on them, and then energetically carries out our plans in a disciplined way. Both our candidates and our members are then democratically accountable to these decisions, and we review the lessons at the end. It is in this way that we’ve been able to win three elections in Seattle and historic victories for the working class in spite of the opposition of the city’s entire political establishment and business elite, including the richest man in the world.

While Socialist Alternative is an ideologically and politically cohesive organization, we also see the need for broader, “big tent” organizations like DSA to help bring together wider forces in campaigns, movements, and ongoing united fronts. By participating in DSA, we want to actively help build the organization while engaging in comradely debates about how to advance socialist politics and struggles of workers and the oppressed.

We think that DSA will be best positioned to grow and develop both the organization and the wider socialist movement by popularizing the need for a new party, running exemplary viable campaigns outside of the Democratic Party, and focusing its energy on building mass movements. This approach would require DSA decisively breaking from the Democrats and helping lay the basis for a new mass party.

A workers party won’t emerge from declarations from a few thousand active socialists. We need to build support for this idea with bold participation in the looming mass struggles, and we need to win over a section of the labor movement to independent politics. At times, this will require that socialists “stand against the stream” of popular opinion on lesser evilism, but this experience will help prepare activists to take bold action when the opportunity arises to build a new party. We think that in the next four years, historic opportunities will develop for a new party, and Socialist Alternative would like to work closely alongside DSA in preparing for this.

In order to effectively build the socialist movement and class struggle, we will need to learn from worldwide events in this tumultuous era. Socialist Alternative brings a global perspective and analysis to all of our activity through our sister organizations in International Socialist Alternative with sections or groups on every continent. Across the world, we’ve helped to build wider new left formations while openly and honestly putting forward our own Marxist politics. For example, in Brazil our section is active in PSOL, and in Germany we are active in DieLinke.

Socialist Alternative has grown more in 2020 than in any other year in the history of our organization. We have also initiated many broader struggles, from Tax Amazon in Seattle to Stop the Station in Pittsburgh, and have been elected to more leading positions in the unions than ever before. We’ve found that many new activists are attracted to a specifically revolutionary Marxist organization that is fully independent of the Democratic Party, politically cohesive, and highly effective. Socialist Alternative’s independent work can continue to play a role in strengthening the wider left while we deepen our collaboration with DSA campaigns and activists.

In working together to build the socialist left, we want to avoid any unnecessary polarizations on organizational issues, and instead we’d like to focus patient debates on political questions facing our movement. Towards this end, we are not conducting any “secret entrism.” Socialist Alternative members will be joining DSA openly and honestly, stating clearly their dual membership and their political positions in a comradely way.

We realize that DSA has a national “ban” on members of democratic centralist organizations joining. However, many DSA members we’ve talked to oppose this Cold War holdover and are excited about Socialist Alternative members joining. While this rule was originally created to prevent Marxists from joining DSA, in recent years, a new generation of DSA activists have changed the organizations’ politics for the better, many of them identifying as Marxist. We think DSA should remove this exclusionary rule as another useful step towards transforming the socialist left into an important component for the emerging class struggles. Together, we can fight against the threat of the far right, the domination of the billionaire class, and the exploitation of capitalism.

Socialists should unite in action and debate the way forward for struggles of workers and the oppressed in a new convulsive era of crisis. International events will continue to expose capitalism, and activists need to learn from a deep connection to the worldwide struggles against capitalism. The next four years will provide more favorable opportunities for independent working-class politics than there were under the Trump Administration. We hope to contribute to DSA and help build powerful movements as the coming years open up the opportunity for a new mass working-class party here in the U.S.