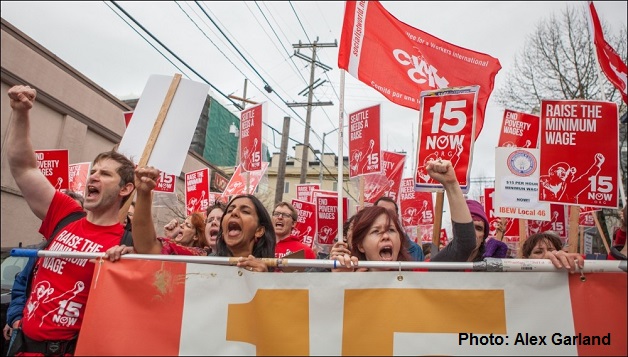 Article updated June 2, 2014 after the vote of the full City Council.

Seattle is the first major city to pass a $15/hr minimum wage.  One hundred thousands workers will be lifted out of poverty and millions will be inspired all over the country and around the world.

On June 2nd Seattle’s City Council voted unanimously to raise the city’s minimum wage to $15/hour.  Starting April 1, 2015 all workers in big businesses like McDonald’s, Starbucks, Macy’s and Target will see an immediate increase to $11 an hour, and by 2025 all workers will be making a minimum of $18 an hour.

Altogether it is estimated that Seattle businesses will have to pay their workers an additional $3 billion in wages over the next ten years! This demonstrates that “struggle pays,” that ordinary people can take on the biggest corporations in the world and win, when we organize and fight back.

Now is your chance to be part of this struggle. Help us build the socialist movement as the backbone for rebuilding the labor movement and creating a new mass party of and for the 99%. Join Socialist Alternative!

The movement of fast food workers strikes, inspired by Occupy, put $15 on the agenda across the country. This received a boost in Seattle when the labor movement successfully won a $15 ballot initiative last November in SeaTac, a small town outside Seattle. But it was the election of Socialist Alternative candidate Kshama Sawant last fall that was decisive in creating an unstoppable political momentum for $15 in Seattle. Sawant ran on a bold platform of $15, creating a major debate throughout Seattle, and won with almost 100,000 votes in November 2013.

“Sawant’s ascendancy has shown that being a socialist is no longer a liability in running for public office. More importantly, the $15-an-hour campaign has nurtured a model of grassroots democracy that challenges the corporate-controlled political process. Observers expect the bill to pass by the end of May. If it passes, the win — though imperfect — will validate Socialist Alternative’s approach, swell its ranks and crack open more space for socialist politics in the United States.”

-Arun Gupta on Al Jazeera America, “Learning from a Socialist in Seattle,” May 21, 2014

Just as important as winning the election was how Sawant and her party, Socialist Alternative, used the platform of her city council seat. Unlike the typical establishment politicians, Sawant used her position as a city councilmember and the big media spotlight on her to build a powerful grassroots movement from below.

Shortly after the November election Sawant and Socialist Alternative launched the campaign 15 Now to keep the pressure high. 15 Now set up 11 action groups in neighborhoods across the city mobilizing in the streets and at public forums.  We organized multiple rallies and marches of hundreds of people in Seattle, a National Week of Action in over 21 cities, and a major presence at both the annual Martin Luther King Day march and May Day march which both drew over 1,000 people.  Critically, through the action groups and democratic conferences, 15 Now offered activists the opportunity to have ownership over the fight for $15.

Through her public position Kshama Sawant was able to counter the propaganda in the corporate media and expose big business’s attempts to water down $15 and hide behind the concerns of small business. Against the claims of some that electoral politics only serve to co-opt genuine working-class movements, we showed how elected office can be used to build and strengthen them. Socialist Alternative together with 15 Now and labor built enough pressure from below to force big business into conceding $15, an historic achievement.

It was the movement of working people and socialists that brought $15 to the table, but it was the Democratic Party who brought big business to the table to water it down.

Initially all the Democratic Party politicians in Seattle opposed the demand for $15. But given the huge public support that was developing, the two main Democrats running for Mayor both came out in favor of $15 in September 2013.  After winning the November election, Mayor Ed Murray said he supported $15 but wanted to do it in a way “that would work for business, too.”

Murray set up an Advisory Committee of  business and labor leaders (but mainly business) to negotiate a compromise. The business and political establishments recognized that there was no stopping $15, but they used the process to insert a number of corporate loopholes such as a delayed phase-in over many years. Business also fought until the final days of the city council process to water the bill down further. At the last minute just before the vote taken on May 29th, a majority of Democratic Party councilmembers moved to delay the implementation date of the minimum wage from January until April next year and also to include a sub-minimum teenager and “training wage.”

15 Now and Socialist Alternative organized a campaign to get rid of these corporate loopholes right up until the final vote.  We organized rallies and spoke out against these gifts to business at every opportunity. 15 Now and Socialist Alternative mobilzied unions, activists, and supporters to come to the June 2nd Seattle City Council meeting, where the bill would be finalized, to fight for the removal of the corporate loopholes added on May 29 – including the delay of implementation and the training wage. Councilmember Kshama Sawant moved multiple resolutions to strengthen the bill in favor of workers and remove the corporate loopholes.  Despite mass support for Sawant’s proposals, the Democratic Party councilmembers – including “left” Democrats – demonstrated their allegiance to business and disdain for the working-class movement that brought $15 to the fore by voting down each of Sawant’s amendments.  (We highly recommend watching this video footage of the June 2nd city council meeting where 15 Now supporters packed the room loudly demanding the removal of the corporate loopholes.)

This process has demonstrated the reality that, even though the Democratic Party uses more progressive rhetoric than the Republicans, fundamentally both parties work to serve the interests of big business. While a single socialist on the Seattle City Council was able to build a movement to win $15 in less than a year, the Democratic Party politicians worked to make the $15 as pro-business as possible.

On a national level, the Democrats have failed to seriously organize and fight for a $10.10/hour minimum wage.  Instead they are using it as an electoral gimmick for the 2014 elections.

That is why Socialist Alternative argues, as we did in Kshama’s election campaign, that working people need our own political alternative to the Democratic and Republican parties. Given the huge alienation with Congress, the mistrust in the corporate politicians and the need to defend working-class families, there is a unique opportunity opening up to build a new party for working people. The work of Kshama Sawant and Socialist Alternative has demonstrated that it is possible to build an independent political voice to challenge the two parties of big business. Sawant’s and Socialist Alternative’s success can be spread. It’s up to you to become a part of that effort.

A Fighting Strategy for Labor

While Seattle has won the highest minimum wage in the country, business was able to weaken the $15 minimum wage in a number of ways. There are unreasonable delays of 3 to 10 years for the $15 to be fully implemented (depending on the size of the business), and a tip penalty and healthcare deduction were added for the first 10 years.

This was not inevitable.  Over the past 6 months Socialist Alternative has energetically engaged in a debate within the labor movement about what the best strategy would be. We urge union members and leaders to review the experience of this struggle, discuss with us, and draw a balance sheet of the lessons, in preparation for future battles.

In our view the strategy of those leading the main labor unions was not focused on building the grassroots movement from below but instead oriented towards the mayor’s process of negotiating with business. They believed this was necessary because labor could not win in a direct and open clash with big business.

After decades of setbacks, it is understandable that the political self-confidence of the working class is low. However, Socialist Alternative argued the debate about $15 was a enormous opportunity to try and mobilize new layers of workers into a movement, which would bring more pressure to bear on the elite and also serve as a critical way for a new generation to gain experience organizing, learn political lessons, and, in this way, begin to rebuild the workers’ movement.

It was in that context that we argued for putting forward a ballot initiative for a strong $15. If the big unions had backed the threat of a ballot initiative for a stronger $15, business could have been forced to concede much more. Collecting 100,000 signatures to put it on the ballot would also be an organizing and educational opportunity to reach broad layers of workers with clear answers to the anti-worker arguments of business and the media (for a long phase-in, for tip penalty, etc).

Labor unions in the U.S. have tremendous resources and political weight.  They have millions of dollars and millions of members that could be mobilized behind a bold campaign to raise the minimum wage. The fast food strikes have played an important role in drawing attention to the issue of poverty wages, but the movement could be much stronger if the unions ended their reliance on the Democratic Party and looked to mobilize the full power of working people through building democratic mass movements.

Over the last three decades, labor’s strategy of trying to appease big business to get some concessions only increased the demands of Corporate America. It’s time to drop this futile strategy.

And we must remember that no reform is guaranteed under capitalism.  Big business could challenge what’s won in Seattle with a referendum or other means, so our movement must be prepared to mobilize and defend what we’ve won.

“In the end,” wrote Arun Ivatury and Rebecca Smith for CNN.com, “the outcome in Seattle demonstrates what history has proved time and time again: When workers are well-organized and there is broad support for higher wages, even businesses that resist the idea are ultimately forced to pay more.” (5/15/2014)

Socialist Alternative supports every possible reform that can be won in a capitalist system. The “fight for 15” has shown that, when we organize, we can win.

Now is the time to build 15 Now across the country. To find or start a 15 Now chapter in your area, go to www.15Now.org. But this fight has also shown that under a system based on profits, big business will always fight tooth and nail to defend their wealth and power. Capitalism is by its nature grossly unequal. The fight for better wages, education, healthcare, housing, the environment and social justice in general must also be a struggle for the socialist transformation of society, based on genuine equality and human need. The task is great, but the time is right. Join Socialist Alternative today and/or donate at SocialistAlternative.org!