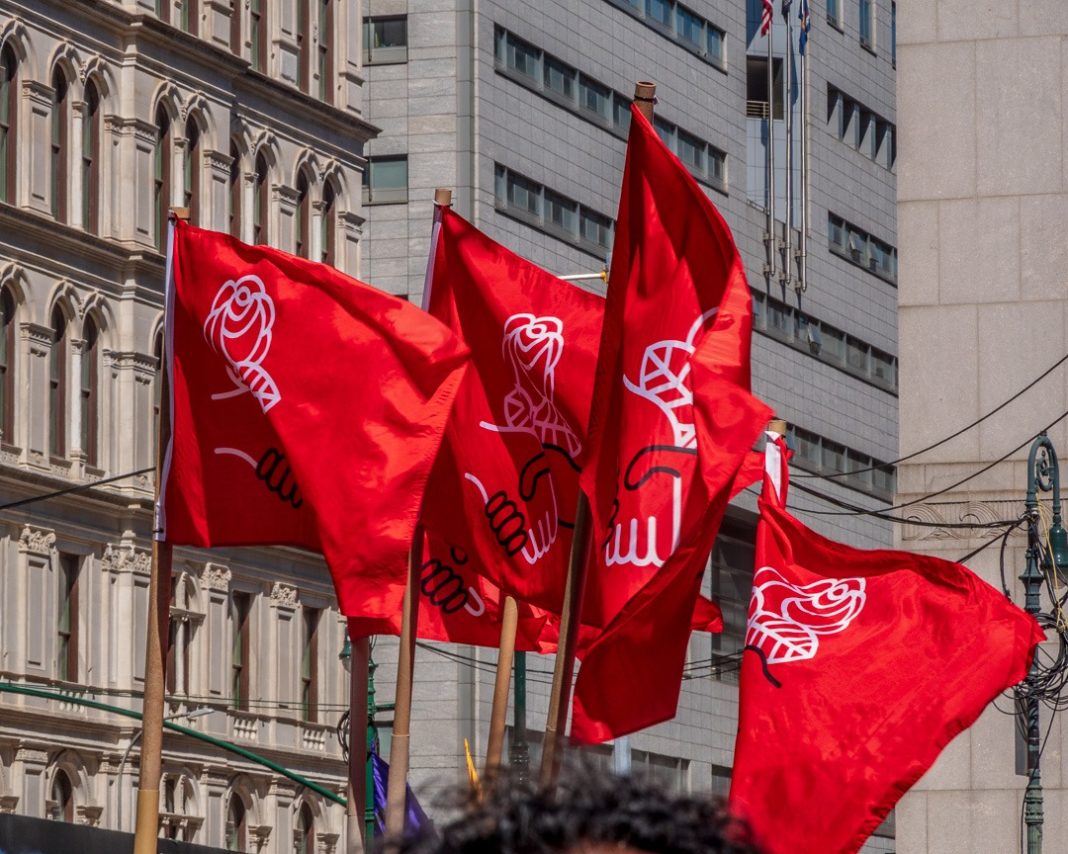 I live in New York City and almost every conversation I’ve had about the election in the past month has gone according to the same loop: “Trump is awful, Biden isn’t much better, but I’ll vote for Biden because I hate Trump.” I understand this logic. It comes from people’s overwhelming desire to resolve the chaos around us and to put an end to the growth of the right. But while this position is very understandable it is missing the larger picture which socialists have an obligation to explain. The corporate media and Democratic establishment is religiously arguing that “returning to normal” and fighting the right means casting a vote for the Democrat-of-the-Day. Left wing organizations, socialist organizations, and prominent socialists like Alexandria Ocasio-Cortez and Bernie Sanders should not be meekly adopting this logic.

Despite how awful Trump is and what his reelection would mean for working people, many millions of Americans are still dreadfully unexcited about voting for Biden. Imagine if, in this situation, rather than conceding when he did and bending the knee to the establishment, Bernie Sanders’ was campaigning for a new party for working people. In the context of a global pandemic, an uprising against racist police violence, and overwhelming support for Medicare for All and taxing the rich this could have galvanized millions of young and working people. It would have presented a historic opportunity for a jailbreak from the Democratic Party.

Because of his refusal to take these steps, we’re now staring at a contest between two bad options for working people with nowhere else to look. Socialists have a responsibility to clarify how we got here and what opportunities have been missed.

Debates On the Left

In an article written by Eric Blanc and Neal Meyer, prominent figures in Democratic Socialists of America (DSA), they write: “Socialists cannot stop this nightmare on our own. But we can and should be part of the broader movement that does. Yes, unfortunately that means voting for Joe Biden and doing our best to convince our friends, family, coworkers, comrades, and neighbors to do so as well — and to do so regardless of where you live.”

This is a departure from what was an already conservative approach taken by a number of leading figures in DSA who signed a pledge calling cleverly for an “anti-Trump vote” without ever saying Biden’s name. DSA is an organization that is close to hitting 80,000 members, it includes elected officials in local and state governments as well as unions – it has an obligation to lead the struggle against the far right, not abdicate it because there’s an election afoot.

There are millions of people who are tired of being taken for granted by the Democratic Party and are ready for bold, left wing leadership. To these people, Blanc and Meyer’s advice is: organizing on behalf of Joe Biden is the most effective way to fight the right. This is a tragic abdication.

There are already hundreds of millions of dollars flooding into Biden’s campaign, thousands of NGOs doing GOTV, and figures like Obama and even Bernie running around the country getting out the vote for Biden. Yet somehow it’s also the responsibility of disillusioned working people who’ve been thrown out with the garbage by the Democratic Party to “get out the vote” for Biden?

Hundreds of thousands of working class fighters could be brought into the socialist movement if they saw something bold and unapologetic on offer. However, what they’re seeing from certain leading members in DSA – as well as from Bernie Sanders himself – is more of the same.

We hope rank and file DSA members will respectfully discard Blanc and Meyer’s advice and instead call for a vote for Howie Hawkins, the socialist Green Party candidate as a means of concretely pointing to the Democratic Party exit sign. While we don’t agree with everything he says, DSA member Jeremy Gong’s response to Blanc and Meyer’s article is overall very positive and we would encourage DSA members to read it. We would enthusiastically welcome DSA chapters to join Socialist Alternative in our efforts to pull together coalitions in our cities to prepare mass demonstrations and civil disobedience if Trump tries to steal the election.

In their article, Blanc and Meyer do not devote a single sentence to explaining the role the Democratic Party played in creating the space for Trump and Trumpism to thrive. This is likely not an accident as any thorough investigation into the logic of widespread “lesser evilism” would turn up proof that the Democrats’ ruthless attacks on working people over decades has fertilized the soil for Trumps to pop up. This is a crucial historic lesson for working class activists to draw out.

On November 8th, 2016, there was a collective jaw drop as Trump overtook Hillary Clinton in electoral votes and became the U.S. president elect. The liberal pollsters and pundits stared in shock, completely unable to explain how their perfect candidate with decades of experience in D.C. lost to a bombastic billionaire businessman and reality TV star.

The Democrats controlled the White House and both branches of Congress during then the worst financial crisis in the U.S. since the Great Depression (until now). With their supermajority, they found it in their hearts to give trillions of dollars to big banks on Wall Street but shrugged in the face of nine million jobs lost and four million homes foreclosed on.

In the eight years that followed, while Obama and Biden were comfortably in office, billionaire wealth exploded and the working and middle classes never got off their knees. Sure, unemployment fell — but the vast majority of jobs created under Obama’s administration were low wage, service jobs. Those same jobs that have now disappeared amidst the 2020 COVID-19 hellscape.

The Democrats’ predictable abandonment of working people during the Obama/Biden administration — which followed the reckless lending, deregulation, and financialization efforts and the relentless attacks on the gains of working people that marked the Clinton and Bush presidencies — laid the basis for Trump’s surprise victory in 2016. They were not able to motivate working class people to get out and cast a vote for Hillary Clinton whose presidency would give them more of the same. More than 200 counties that supported Obama in 2012 flipped for Trump just four years later!

Trump also whipped up a nativist, reactionary agenda in his 2016 campaign which he has built on ever since. The Democrats were in no position to mount a credible challenge to his reactionary ideas.

So not only did the Democrats lay out a red carpet from Trump’s Manhattan penthouse directly to the steps of the White House, they’ve done a grand total of nothing to fight him during the four years he’s been there!

They’ve poured literally years worth of attention and energy into the Russiagate scandal and impeachment nonsense — effectively removing themselves from the real fights that affect working people. They’ve substituted any real fight against Trump for symbolic acts of “resistance” and sassy tweets. This is made depressingly clear with Amy Coney Barret’s seamless nomination to the Supreme Court which the Democrats did not even pretend to fight.

If the left is ever going to gain the ear and attention of ordinary people, it cannot be done by lining up behind whatever corpse the Democratic Party trots out on election year. That is not true “harm reduction.” That approach contributes to the steady march toward something worse than Trump by propping up the exact forces that handed him the mic in the first place.

A Biden administration may be prepared to spend a significant amount of money given the scale of the ongoing economic crisis, but we should be under no illusion he will represent any semblance of a progressive agenda. His administration, as well as most Democrats in Congress, will relentlessly attack working people with big business bailouts, handouts to big insurance companies, and opposition to popular policies like Medicare for All. The space for the far right will very likely grow under a Biden administration and Trump may well continue building support for his ideas even if he loses. In fact, a “Trump-unleashed” situation where he is free to rally his base outside the confines of elected office could lead to the creation of a far-right party.

A real fight against Trump, and the reactionary forces floating in his orbit, requires decisive steps. We need the broader left to boldly take up campaigning for Medicare for All, a Green New Deal, COVID relief for working people, and to defund the police. As part of building these movements, it is crucial that we begin taking steps to build an independent, left-wing political alternative outside the Democratic Party.

The real “harm reduction” that organizations and prominent figures on the left should be engaging in is mobilizing the broadest ranks of the working class into mass movements and urgently creating a new political party with a working class program and class struggle approach. A party that can be a political home to the millions of ordinary people who supported Bernie Sanders.

Left-wing organizations and figures should not direct disillusioned working people back into the Democratic Party trap. They should be leading from the front in a march directly outside the Democratic Party and toward something new. There’s no time to waste in fighting the right and the billionaire class.