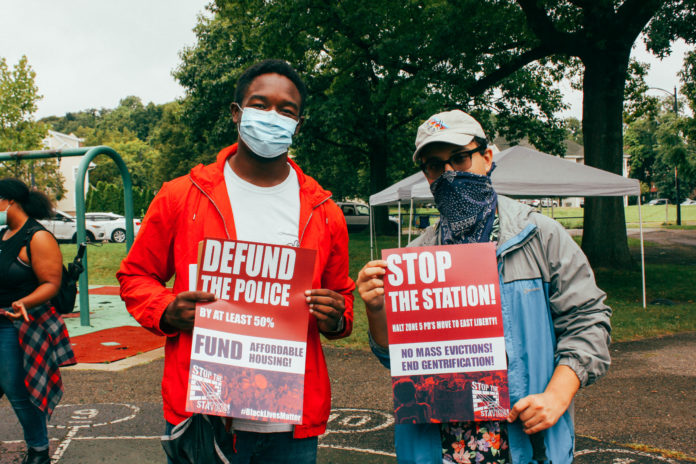 Pittsburgh became a major flashpoint in the Black Lives Matter movement two years ago after the police murder of unarmed teenager Antwon Rose II. Now the brutal slaying of George Floyd has ignited a new and powerful stage of the movement in the city. East Liberty, a historically Black and working-class neighborhood that is being rapidly gentrified, is an epicenter for BLM in Pittsburgh. Not long ago, the area was full of affordable public housing and small businesses. Now, half-empty luxury apartment complexes and tech giants’ offices are the new sights. Adding insult to injury, the city government has, without transparency or community input, decided to relocate a police station into the neighborhood.

The location for the new station is two blocks from Penn Plaza, the site of a demolished public housing complex that was home to over 200 families only six years ago. Penn Plaza Support and Action (PPSA), a grassroots organization to defend tenants’ rights and fight for affordable housing, emerged out of the struggle against its demolition. When the new police station was announced, PPSA alongside Socialist Alternative began organizing to stop the $3 million project. Out of this, the community coalition “Stop the Station” was born. From the beginning of the campaign, by flyering at protests and reaching out to emerging leaders, we have connected with the ongoing BLM movement and the newer activists involved, with their deep well of energy and dedication to fighting racism and police terror. There is a real need to channel the spirit of street protests into organizations with democratic structures based on a clear program, or else the momentum will dissipate.

The rallying cry of “defund the police” heard in protests across the country clearly connects with Stop the Station, as we are demanding the money for the station instead be allocated for affordable social housing, public education, and social services. We can’t allow the city’s politicians to wriggle out of responsibility with vague promises of change intended to demobilize movements. Our movement will hold their feet to the fire and force them to address the root cause of crime — poverty. This is why we have connected the demand to stop the station to broader economic demands.

We know that even slashing the bloated police budget and reallocating the $3 million for the police station will not fully fund everything we need. That is why we are also calling for taxes on big business and developers, like Google, Amazon, and LG Realty, as well as removing the tax-exempt status from hospital and insurance conglomerate, UPMC.

Beyond reallocation of funding, how can we truly stop racist policing? How would we be certain that the next time a person is gunned down by police, that cop is brought to justice? How can we prevent these murders from occurring in the first place? Stop the Station demands full democratic control of the police by an elected board with power over hiring and disciplinary policy as well as power to, subpoena, review budget priorities, and how police are deployed. This demand has been extremely popular in the community when knocking on doors and setting up community tables, a regular practice of our coalition. We have found that when our campaign pairs social questions of racism, police violence, and a lack of democracy in our city with economic questions, like the roots of crime, funding clear community needs, and taxing big businesses to pay for it, working people are excited and support us, even when they do not agree with every aspect.

Stop the Station has held regular open meetings, as well as rallies and teach-in events attended by hundreds of workers and youth. At all our events and meetings we offer ways for people to plug in immediately. Currently we are organizing for a “People’s Budget Forum” which will call on the mayor and city council members, all of them Democrats and many who call themselves “progressives,” to listen to Pittsburghers speak on what should be prioritized in the budget and respond to the demands of the coalition. Our movement will use this to force them to confirm whether they support affordable housing, public education, and anti-racism, as they have claimed, or if they are accountable only to big business and the police union. We’ll demand they pass a budget that works for working people.

A victory for this movement would have potentially national implications and would set a powerful example of how to wage successful “defund the police” campaigns. Socialists have always played a strong role in movements against racism and today is no different. The power of a united, multiracial working class can not only stop the station, but it can build a new society free of oppression and exploitation.