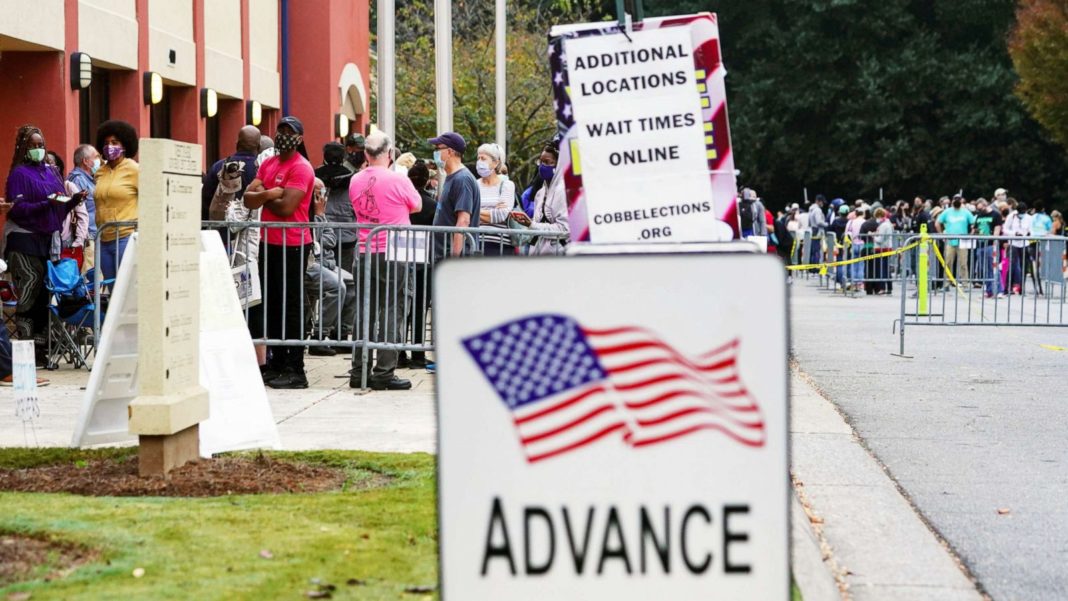 In an interview in New York Magazine earlier this year, self-proclaimed socialist Congressperson Alexandria Ocasio-Cortez remarked “In any other country, Joe Biden and I would not be in the same party, but in America, we are.” As we wrote at the time, we wholeheartedly agree. This comment reflects the reality that the Democratic Party is fundamentally at odds with socialist politics. It also reflects a misguided sense of American exceptionalism, that the building of working-class parties that happened elsewhere in the world can’t be replicated here. This is often blamed on some ingrained structural feature in the American electoral system. A new party, it’s argued, would be a nice idea, but it can only happen after we reform our electoral system. Until then, socialists have to be in the same party as Joe Biden. A closer inspection, however, reveals this line of argument to be extremely short-sighted.

It’s abundantly clear that the American electoral system is nowhere near as democratic as it makes itself out to be. The electoral college gives someone in Wyoming 3.6 times the voting power of someone in California. In the Senate, they have 70 times more representation. The House of Representatives fares better than the Senate,  but is still notoriously gerrymandered. The judicial branch of government, the Supreme Court, has no pretense of democracy, consisting of unelected, lifetime appointments. And we’ve had two presidential elections in under two decades where the winner of the popular vote lost the election.

Beyond this, the electoral system is skewed in a way that disenfranchises working people and marginalized groups. Election day is held on a Tuesday, when most people have to work. Undocumented immigrants are barred from voting altogether in national elections. Washington D.C. doesn’t get congressional representation, and the U.S. “territories” don’t get any federal representation despite being U.S. citizens. Felony disenfranchisement has deprived over 5 million voters convicted of a felony from the right to vote in the current election. Right-wing governments have disenfranchised the black population through purges of voter rolls. The COVID-19 pandemic has been used to further disenfranchise voters, as when the number of polling stations in Milwaukee county was reduced from 180 to 5 during the 2020 primary election.

These deeply undemocratic features in our electoral system act as undoubted obstacles towards any attempt to give the working class its own political voice. A serious campaign for electoral reform would be a welcome development, and long-lasting change will ultimately involve going beyond whatever electoral structures the capitalists will allow us. However, when people hold up electoral reform as a necessary precondition for building independent politics, there are specific reforms they have in mind.

What Kind of Reform?

When people make this “electoral reform first” argument about independent politics, the target of their reform is the first-past-the-post voting system, which means that, in an election with three or more candidates, the candidate with a plurality will win, even if they don’t have an outright majority. The most common reforms put forward to this are Ranked Choice Voting (RCV), proportional representation, and fusion voting.

In RCV, voters rank the candidates by preference and, if no candidate has a majority, the candidate with the fewest votes will transfer their votes to their next preference. This continues until someone gets a majority. In proportional representation, people vote for parties, rather than individuals, and representation is determined proportionally based on party lists. Fusion voting, advanced by groups like the Working Families Party, is easily the worst option, allowing candidates to associate with multiple parties in an election. This actually stifles moves towards political independence, since it allows Democratic politicians to pose as third-party candidates.

These forms of electoral reform are primarily focused on combating the “spoiler effect”, the idea that voting for a candidate outside the two-party system will end up putting the Republicans in power. Insisting on these types of reforms as a precondition for building a new party is less about democracy and more about bypassing the pressure for “lesser evilism”. But the practice of RCV and proportional representation doesn’t do away with this pressure. They just change the form that it takes.

While RCV makes it easier for smaller parties to become less small, it comes with an assumption that their votes will ultimately go for the status quo. In countries like Ireland that use RCV, “lesser evilism” takes the form of vote transfer pacts, where left parties are pressured to agree to transfer their votes to capitalist parties. Similar attacks on independent politics as have been seen in the U.S. occur when socialists don’t go along with that. In countries with proportional representation, “lesser evilism” takes the form of multi-party coalition governments. Italy, which makes partial use of proportional representation, also had one of the most significant new left formations in the 1990s with Rifondazione Communista. But by 2009, the party lost all its Members of Parliament because it consistently went into coalition with the neoliberal government of Romano Prodi as a “lesser evil” to Silvio Berlusconi.

“Lesser evilism” isn’t a necessary consequence of the quirks of the American electoral system. It’s a pressure stemming from the organizational weakness of the working class in the face of the power of capital. The way to challenge that pressure is to build the independent organization of the working class. And this can be done, and has been done, even with a first-past-the-post voting system.

Britain was also historically dominated by two capitalist parties, with the Liberal Party and the Conservative Party serving as rough analogs to the Democrats and Republicans in the U.S. But, in 1900, an explicitly working-class party, the Labour Party, was founded and ended up superseding the Liberal Party in British politics. While the British electoral system isn’t a direct copy of the American system, it still relies on first-past-the-post elections.

Keir Hardie, the “father” of the Labour party, didn’t wait for RCV to allow him to transfer his votes for the Liberal Party. Nor did he wait for proportional representation to allow him to form a coalition government with the Liberals. Following his own personal break with the Liberal Party, he waged a sustained campaign to break the unions from hanging on the Liberal Party’s coattails. Following the 1903 anti-union “Taff Vale” judgment, a massive upsurge in workers’ struggle massively expanded the base of the Labour Party, transforming it from a small-scale “third party” into a mass workers’ party.

Similar developments occurred closer to home. Although the U.S. never had a mass workers’ party comparable to the British Labour Party, it does have a very prominent case of a radical “third party” transforming into a major party. The Republican Party, in spite of its current decrepit state, began as an abolitionist party, coming from the earlier Free Soil Party. The American electoral system in the mid-19thcentury was even less democratic than it is now. Women and people of color were deprived of the right to vote, and the slave states were able to pad out their representation by counting their slaves as three-fifths of a person. Nonetheless, the anti-slavery vote was able to go from 4.91% for the Free Soil Party in the 1852 election to 33.1% for the Republicans in the 1856 election to winning the 1860 election.

Even when new working-class parties remain “third parties” they can accomplish quite a bit. Canada is still dominated by two long-standing capitalist parties, the Liberal Party and the Conservative Party. Like in the U.K., Canada has a parliamentary system, but with a first-past-the-post system for electing MPs. In 1961, Canada saw the founding of the New Democratic Party (NDP), built out of a mass campaign for single-payer healthcare. While the NDP never led a national government, they were able to hold the balance of power in 1966 and force the Liberal government to pass single-payer healthcare. This stands in marked contrast to the way that California Democrats blocked the movement within the party to enact single-payer in the state which would have been a massive breakthrough in the fight for single payer nationally.

A more recent partial precedent can be seen in Bernie Sanders’ two presidential campaigns in 2016 and 2020. Unfortunately, Sanders refused to break from the Democratic Party like Keir Hardie did with the Liberal Party. However, he did break with another established practice of electoral politics when he refused to accept corporate cash. The domination of elections by large amounts of corporate cash is another undemocratic feature of the U.S. electoral system that stifles the development of independent working-class politics. And countless Democrats who accept corporate money have a history of defending their dependence on it as a necessary evil until campaign finance laws are changed. Sanders showed that the established wisdom about corporate cash could be challenged through the organization and mobilization of the working class. Unfortunately, he accepted the established wisdom about the Democratic Party, and the movement has suffered as a result.

A Call to Action or Inaction?

Maine is one of the few states to use RCV in state elections, and it was the product of a grassroots movement from below. Previously, Maine was run by a right-wing Trump-esque governor who was elected in 2010 with a plurality of 37.6% in a four-way contest. Democratic opponents of independent politics held up this election as an example of the dangers of independent and third-party candidates acting as “spoilers,” even though the Democratic candidate came in third place in that election.

The Democratic Party’s silence on, or active stifling of, electoral reform, goes back at least as far as the “electoral reform first” argument. The 2000 presidential election is used as a go-to argument against independent politics, because Ralph Nader’s vote in Florida was larger than the gap between George W. Bush and Al Gore in that state. But there was also massive racist voter suppression in Florida during that election. And when members of the Congressional Black Caucus pushed for an investigation of the voter suppression, not a single Democrat in the Senate backed it. The Democratic leadership in reality refused to fight to the end to defend the full recount of the Florida vote which would have probably led to them winning because they would rather lose than be beholden to a movement.

The racist voter suppression that the Senate Democrats refused to challenge has become an even bigger issue in recent years. Racist voter suppression in Milwaukee is understood to be a major cause of Wisconsin going to Trump in the 2016 election. But the main electoral “reform” the Wisconsin Democrats have carried out in preparation for the 2020 election has been to engage in sleazy bureaucratic maneuvers to keep the Green Party off the ballot. This actively makes the electoral system less democratic and less conducive towards building independent left politics.

We do need electoral reform, just as we need a new party run by and for the working class. But the “electoral reform first” approach won’t achieve either. It represents either an over-pessimistic naïveté about the working class’s ability to emancipate itself or an over-optimistic naïveté about the willingness of the parties of big business to do the emancipation for us. The reality of the current crisis of capitalism and the growing mood to struggle suggests otherwise.