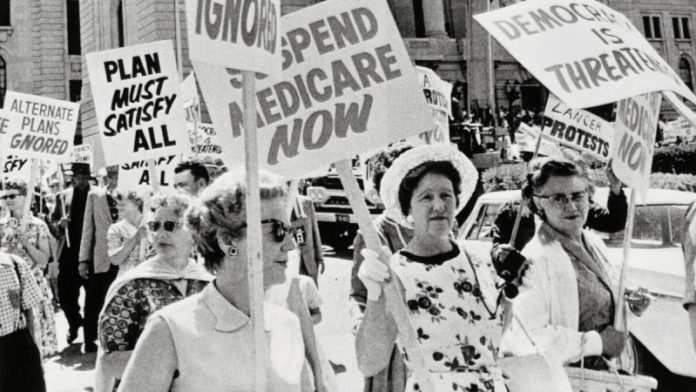 As Michael Moore’s new movie Sicko demonstrates, the publicly-funded healthcare system in Canada offers numerous advantages to working people over the privatized system in the U.S. Almost 100% of all hospital and physician care is covered by the state-run Medicare system, producing higher life expectancy and lower infant mortality rates at less than half the per-capita cost of the U.S.

Canadian workers had long fought for their right to healthcare, but the major reforms began in the period immediately after World War II, when mass workers’ parties were elected into government across much of the industrialized world. In Saskatchewan the Co-operative Commonwealth Federation (CCF), which described itself as socialist, rose to power. The CCF was a reformist farmer-labor party formed out of the unions during the Great Depression to fight for workers’ gains.

In 1946, the CCF passed the Saskatchewan Hospitalization Act, which guaranteed free hospital care to most of the population. This spawned copycat programs in both British Columbia and Alberta, implemented in 1948-49. A 1949 Gallup poll showed that 80% of Canadians wanted universal healthcare.

The public response to these programs was so great that in 1957 the federal government was forced to pass the Hospital Insurance and Diagnostic Services Act (HIDS) to fund 50% of the cost of any such programs, which over the next four years allowed all ten provinces in Canada to provide free hospital care.

Seeing a golden opportunity, the CCF in Saskatchewan used the extra money HIDS freed up to expand their program to cover all physician visits as well. The plan faced fierce opposition from the ruling class and many physicians, who fought bitterly against it. But the vast majority of Canadian workers favored the plan, and it was pushed through in 1961.

Workers Party Formed
The plan was so successful that throughout the early 1960s workers demonstrated across Canada for the plan to be implemented nationally. Also, the CCF used the healthcare issue as a launching pad to build a national party. In 1961, the CCF joined with the Canadian Labour Congress to form the New Democratic Party (NDP).

In 1966, under the twin pressures of organized labor marching in the streets and the NDP holding the balance of power in parliament, the capitalist Liberal Party then in power was forced to pass the Medical Care Act (Medicare), which extended the HIDS Act cost-sharing to allow every province to set up a universal single-payer healthcare plan.

Only when the capitalist class feels their rule threatened by a mass movement will they grant reforms. The Canadian experience shows the importance of linking up workers’ struggles on the ground with building an independent political party that can challenge big business for power.

Reforms Not Enough
However, by looking at Canada since 1966, we can see that reforms like universal healthcare are not enough in the context of a profit system. The government has consistently failed to allocate enough money to the Medicare system to cover its costs. This puts undue strain on the provinces and causes parts of the system, like prescription drug coverage, to be pushed into the private sector.

Also, the Canadian system is still not fully publicly-run. Doctors still operate as independent businesses, but are paid per visit through contracts with the government insurance agency. This setup, along with varying income between provinces, has caused chaotic distribution of resources with severe doctor shortages in certain areas. Without real democratic workers control over the healthcare industry, the government puts forward “free market” solutions that only threaten to worsen the situation.

As long as society is run for the benefit of corporate profits, we can expect to see all our gains clawed back by big business. The ruling class in Canada is trying to privatize healthcare, and their political parties underfund the system so they can push the idea that publicly-financed healthcare doesn’t work. We need to argue against this propaganda by calling for more funding for social programs, paid for by taxes on big corporations and their ultra-rich CEOs.

By learning from the experience of Canadian workers and arming ourselves with a socialist, class-struggle strategy and program, we in the U.S. can not only win universal healthcare but free public education, child care, affordable housing, and other major reforms for working people. But only by workers taking democratic control of the economy and government can we hope to keep what we’ve won.