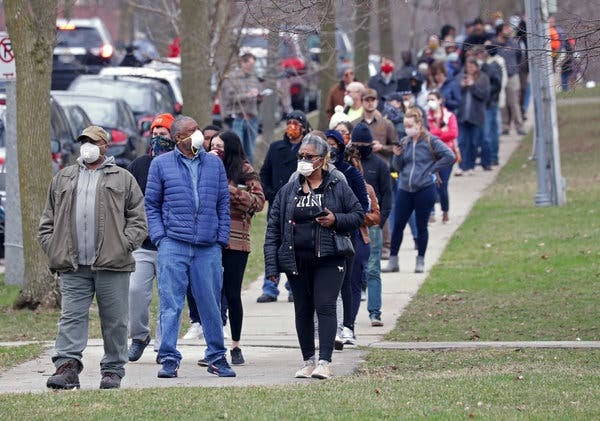 As this goes to press, tens of thousands of Wisconsin residents are being forced to risk their lives as they line up to have a say in how the government is run. The tragic irony is that it is the Wisconsin government which is responsible for this; along with the social and economic fallout which is likely to follow.

On Monday, April 6, Wisconsin Governor Evers finally caved to grassroots pressure and announced an Executive Order to delay the Tuesday April 7 primary until June 9. This comes after Evers, alongside statewide Republican leaders, spent weeks resisting demands to postpone Tuesday’s in-person primary. And true to form, immediately following the release of the executive order, Republicans are vowing to fight this tooth and nail. A federal court has already blocked the executive order.

With the spread of COVID-19, forcing Wisconsinites to vote in person would be voter suppression at best and negligent homicide at worst. The United States currently has the most COVID-19 cases in the world. In Wisconsin, there’s over 2,500 confirmed cases and 84 total deaths as of the time of this writing. This past weekend alone – from just Saturday to Sunday – Wisconsin saw a jump of 155 newly confirmed cases.

Those hit hardest by the Coronavirus Crisis were already targeted by Wisconsin’s 2015 voter ID laws. Continuing with the April 7 primary is projected to have one of the lowest voter turnouts in history. So far, Wisconsin is the only state of 11 to vote this Tuesday that hasn’t taken measures to ensure the safety of voters by (at the very least) postponing their election.

This is explicitly at odds with the March 25 “Safer at Home” order put in place by Gov. Evers, which puts Wisconsin into a near lockdown, outside of essential work and travel. The order lasts  through April 24 and advises avoiding social gatherings in groups of 10 or more. The Centers for Disease Control and Prevention (CDC) also recommends avoiding crowds, maintaining a six-foot distance from others and that those age 65 and older remain at home entirely. It is entirely contradictory to continue in-person voting on April 7 given the order and public guidelines.

States like Florida that carried out in-person voting reported that some of their poll workers tested positive for COVID-19. In Wisconsin, over half of poll workers are over 60 years of age, a group of people especially at risk of contracting the deadly virus. Many Wisconsin poll workers have opted out of putting their lives at risk and Waukesha has announced just one polling location for a city of over 70,000 people. Brookfield, a city of almost 40,000, also announced just one polling location. In Milwaukee County alone, which accounts for over 50% of cases, polling locations have been cut from 180 to 5. With 50,000 likely voters in Milwaukee proper this threatens to expose 10,000 individuals to the same surfaces. Moving forward as-is would not just further delegitimize the tattered democratic process in Wisconsin elections, it means dramatically increasing the rate of infection and death. In a city where over 50% of infections and 81% of deaths are African-American, this callous racism deserves utter condemnation and in itself renders the election completely illegitimate.

In his statement, Evers tried to pass all responsibility for a delay in postponement to the Republicans. The fact he passed this executive order only in the 11th hour demonstrates otherwise. The reality is he forced grassroots activists – many, unsurprisingly, Bernie supporters – to drag him every step of the way to this decision. Weeks went by before he even asked the Republican dominated legislature to change voting laws. The same Republicans responsible for some of the worst voter suppression laws in the country; which reduced executive powers as soon as their beloved Walker was booted from office; to which Evers responded by offering Republicans positions in his cabinet.

Evers, the “go-bland-to-win” candidate, would have needed to mobilize a mass public pressure campaign to stop the executive order from being successfully overturned by the Wisconsin State Supreme Court. A move that would be out of character with his entire time in office, and throughout this crisis. This last minute stunt looks more like an attempt to distance himself from the fiasco by assigning all blame to the legislature while effectively doing nothing to stop it. And while we have no leader willing to do what is necessary, working people – as is the case with this entire crisis – are left holding the bag. The entire back and forth circus between the Democrats and Republicans demonstrates the urgent need for a new party.

If this primary goes ahead, the vote in Wisconsin should be seen as completely illegitimate. Democratic rights have always been limited for working people in the U.S., only mass movements have effectively expanded these rights. What this points to is a need to get organized and build a movement both inside and outside of elections if we are going to see the changes we need.

Socialist Alternative was proactive in calling on Governor Evers to delay the primary to June and to provide mail-in ballots to every Wisconsin household. Our petition, which was launched March 21, also addresses a full array of concerns for working people and students to keep them safe and secure during the crisis. This includes a rent freeze, expanding COVID-19 testing and making it free, cash assistance, taxing the wealthy, tuition reimbursement, moratorium on hospital closures as well as reopening closed hospitals and constructing new ones, releasing prisoners and immigrants in detention centers, stopping ICE raids and deportations, and Medicare for All.

Both the Democrats and Republicans have saddled their parties to corporate interests and lack the democratic structures to hold politicians accountable. We need a movement building organization of, by and for working people with democratic structures down to the local level. This would give us our best shot at winning the much needed relief package outlined above, and most importantly, to restructure the economy so working people are not forced to carry the burden of yet another capitalist crisis.