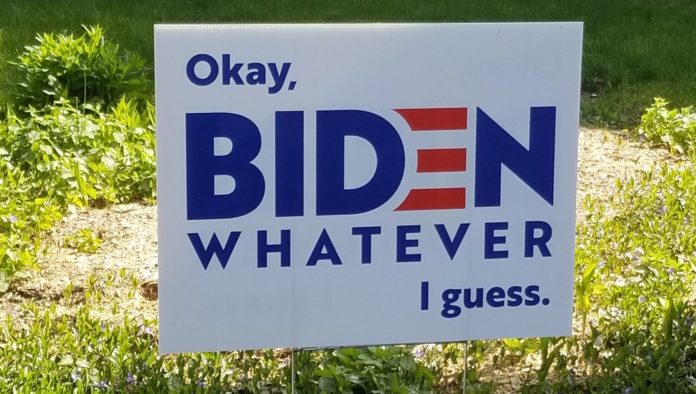 Millions have spent the past four years horrified by the experience of the increasingly authoritarian Trump administration, that deliberately stokes racist division. But many are nonetheless disappointed that his main opponent, Joe Biden, is  a corporate tool who was an architect of mass incarceration and whose campaign message boils down to “I’m not Trump.”

Socialist Alternative is supporting Howie Hawkins, a candidate for the Green Party with a left program, and we’re doing so in order to rally support for a new party.  Many left activists are nonetheless advocating a vote for Biden. Sanders himself has been attempting to sell Biden saying he will be “the most progressive president since FDR.” Others, such as Alexandria Ocasio-Cortez have been more willing to admit to Biden’s failures, framing her endorsement of him as “harm reduction.”

The idea of “voting as harm reduction” has become increasingly popular among activist circles since the 2016 election. It has a certain following within the Democratic Socialists of America. It’s especially popular among anarchist and “base-building” trends on the left who traditionally look down on electoral politics. In practice, however, the “harm reduction” argument is far less radical than its rhetoric would have you believe.

What is “Harm Reduction”?

The term “harm reduction” has its origins in public health rather than electoral politics. Developed during the AIDS epidemic in the 1980s, it was a progressive challenge to the “war on drugs.” While the “war on drugs” pretended to be about saving people from the scourge of drug addiction, it failed in this task but succeeded in strengthening institutionalized racism. The “harm reduction” approach, on the other hand, accepted the reality of drug use, and sought to provide services that would mitigate the worst effects of drug addiction. Most notably, this involved setting up needle exchange programs that could provide heroin addicts with clean needles, which could prevent the spread of HIV.

When the term is used in electoral politics, it means voting for Democrats as a means of preventing Republicans from coming to power. But supporting corporate parties and politicians is fundamentally different from providing a social service for people struggling with addiction. The embrace of “harm reduction” in an electoral context is less an attempt to expand the harm reduction principle than an attempt to give lesser evilism a makeover. After all, saying you support “lesser evilism” sounds like you’re compromising your ideals. But saying you support “harm reduction” sounds like you’re taking a stand against institutionalized racism and state repression.

Regardless of which term you use, the actual practice fails to live up to the name. “Lesser evilism” or “harm reduction” relies on viewing individual elections in isolation, tallying up the pros and cons of two candidates. But actual change is the product of mass social struggle in the streets and in the workplaces. The struggles of the late 60s and early 70s brought about fundamental gains in women’s rights, civil rights, labor rights, and expanded social services, even under the right-wing Republican president Richard Nixon. The Democratic Party, an institution of big business, plays the role of the “graveyard of social movements,” serving to derail social struggles from the Wisconsin Uprising of 2011, to the fight for Medicare for All, to the #MeToo movement.

In office, Obama didn’t cause harm reduction but harm creation on a massive scale. Obama bailed out banks and auto companies on the backs of workers, deported more people than any other president, cracked down on whistle-blowers like Chelsea Manning and Edward Snowden, and continued the war in Afghanistan while massively expanding drone warfare. Even if one claims that this was “harm reduction” in comparison with a hypothetical Republican administration, helping Wall Street while doing nothing for millions who lost their jobs and homes during the 2008-9 recession allowed assorted right-wing demagogues, from Ron Paul, to the Tea Party, to Donald Trump, to portray themselves as anti-establishment. This helped to bring Trump to power, bringing about the very harm that voting Democrat was supposed to reduce.

In the 2016 and 2020 elections, Bernie Sanders was able to provide a voice for the struggles that had broken out. But he was constrained by working within the big business Democratic Party, including his “lesser evil” support for Clinton and Biden following the primaries. Socialist Alternative supported Sanders’ campaigns in 2016 and 2020 in part because they pointed in the direction of a new party. But we also warned about the dangers of remaining within the framework of the Democratic Party.

In 2016, When Sanders ended his campaign and supported Clinton, he in effect demobilized a left political force that could have played a crucial role going into the Trump years. His campaign could have been the beginning of a new party and would have made the fight against the right far more effective. Likewise his capitulation this time has left working people facing a leadership vacuum in the middle of the pandemic and economic crisis. This is real “harm creation”.

There are some differences, however between the “harm reduction” argument and the traditional “lesser evil” argument. Traditional advocates of lesser evilism tend to overstate the role of electoral politics at the expense of social struggle as the driving force of social change. Advocates of “harm reduction,” on the other hand, do acknowledge the primary role of social struggle and, if anything, downplay the significance of electoral politics.

One of the most prominent pieces on the “harm reduction” approach to elections was a 2016 Truthout article by anarchist Ryan Conrad called “I’m an Anarchist and I Vote”. In this article, it wasn’t simply voting for Democrats that was portrayed as “harm reduction,” but electoral politics in general. Conrad refused to “encourage electoral politics beyond harm reduction voting” and instead reduced voting to “one of many small strategies to make another world possible,” effectively a side activity to accompany the real struggle in the streets. A more caustic version of this argument came from Jezebel writer Esther Wang in the current election. After Bernie Sanders endorsed Biden, Wang expressed support for the decision “because I’m not a dummy who thinks electoral politics is anything but harm reduction!”

This attitude is an attempt to reconcile radical politics with support for corporate politicians. If anything, building independent, working-class politics is presented as sowing reformist illusions like a “dummy.” And voting for a candidate as worthless as Joe Biden is a way to show off the revolutionary contempt you hold for the bourgeois electoral system.

This line of argument predates the electoral use of the term “harm reduction.” In the 2004 presidential election, the anarchist intellectual Noam Chomsky advocated support for pro-war Democrat John Kerry on this basis. Chomsky argued that elections were “a marginal part of politics” that amounted to spending “five minutes, maybe, thinking about what you should do.” As Socialist Alternative argued at the time, the electoral system is not “a marginal part of politics.” While elections under capitalism are rigged in favor of big business, they nonetheless bring millions of working-class people into political activity. The ultra-left anarchist dismissal of electoral politics serves to cede that intense political activity to big business. This is even more true when it’s accompanied by engaging in electoral politics on a “harm reduction” basis.

The potential for a genuinely revolutionary approach to electoral politics can be seen through the example of Kshama Sawant, Socialist Alternative’s City Councilmember in Seattle. When she was first elected in 2013, Sawant and Socialist Alternative were under no illusions that progress could simply be legislated into existence. Recognizing these limitations, we used our elected city council position to mobilize the working class into activity and to expose the corporate domination of local politics. This allowed us to achieve major victories, from the $15/hour minimum wage in 2014 to the recent Amazon Tax, a tax on big business generating an estimated $210-240 million per year to build social housing. These victories were accomplished against massive opposition from big business and with a minority of one on the city council.

Kshama has won three elections, the most recent of which saw Amazon pour over a million dollars into defeating her. Combatting this required massive mobilization and organization efforts, efforts that played directly into our extra-electoral campaigning. It was not a “marginal” part of Seattle politics limited to spending “five minutes, maybe, thinking about what you should do.”

The opportunity is there to replicate the experience of Seattle on a much larger scale. Bernie Sanders’ campaigns in 2016 and 2020 served as a massive pole of attraction for working people. Had he been willing to break from the Democratic Party he could have directed that energy in the direction of building a new working-class party on a national scale. The same role could be played by Alexandria Ocasio-Cortez and the Democratic Socialists of America. Building a genuine political voice for working people would accomplish much more than mere “harm reduction”. However, lining up behind Biden, or Clinton, Obama, and Kerry before him, serves to stifle this move.