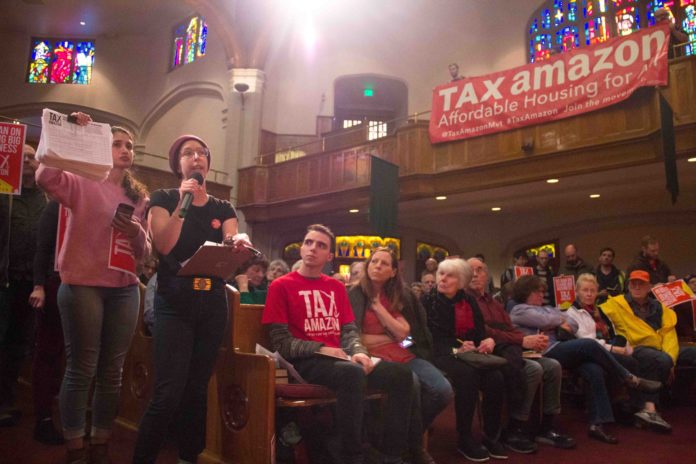 Seattle and King County are facing a deep housing affordability and homelessness crisis that requires hundreds of millions in funding to address. Seattle residents understand this, which is why the Tax Amazon movement to fund a major expansion of green, union-built, affordable social housing is gaining momentum, regularly mobilizing hundreds of people to our recent events.

Seattle City Councilmember Kshama Sawant recently unveiled legislation developed in coordination with the Tax Amazon movement to raise $300 million per year from the city’s largest corporations to fund 8,000 affordable homes in ten years and Green New Deal upgrades to existing homes. There is a large and growing coalition preparing to fight for this proposal in the form of a ballot initiative if the City Council refuses to act.

Amazon and other large corporations know a victory like this would likely spread quickly across a country full of frustrated, struggling working class families desperate for more affordable housing, good union jobs, and a way to make a meaningful impact against the looming threat of climate change.

To protect their profits, Amazon, Microsoft, and the Chamber of Commerce have their corporate lobbyists working with Democrats in the Washington state legislature to erect a massive legal barrier in front of our movement in the form of a “preemption clause,” or statewide ban on taxing big business, which they are preparing to introduce into an otherwise progressive bill (HB 2948) making its way through the State legislature.

HB 2948 would authorize King County to tax big business $150 million per year, which could fund around 10-15% of the affordable housing needed according to a recent independent report. Adding a preemption clause to the bill would not only block Tax Amazon’s proposed legislation, but also any other efforts by cities to raise progressive taxes statewide. It would effectively condemn working families across the entire region to a worsening housing affordability and homelessness crisis.

Cities across the state are already suffering not only from an affordability crisis, but also deeply underfunded public transportation, public schools, health care, and social services. On top of that, Tim Eyman’s Initiative 976 has just created a massive state-wide deficit in public transportation funding. If we can’t tax big business, it would lead to a slashing of transit service across the state or the raising of significant taxes on working people.

A statewide ban on taxing big business would be one of the worst attacks on working-class Washingtonians in decades. Thanks to the already existing state-wide bans on income tax and rent control, Washington State already has the most regressive tax structure of any state and one of the worst affordability crises in the nation.

Most Democratic Party legislators have not yet taken a stand against preemption. Socialist Alternative Councilmember Kshama Sawant sent Representative Nicole Macri (D), the bill’s main sponsor, a letter welcoming her to join our Tax Amazon movement by taking a clear stand against the poison pill of preemption. When she failed to respond, over 50 supporters from the Tax Amazon movement, including Kshama Sawant, Democratic Socialists of America congressional candidate Joshua Collins, and Washington State Senator Joe Nguyen went to Olympia to demand face-to-face that she take a public stand against any state ban.

Macri agreed to meet with our movement, but when asked directly by Socialist Alternative member Kailyn Nicholson “to say publicly today that you will not vote for a bill that includes preemption,” Macri flatly refused to make that commitment.

On Saturday, around 80 supporters of Seattle’s Tax Amazon movement attended a Town Hall held by Democratic state legislators to demand they address the question of preemption. When it came time for public comment, Tax Amazon supporters including trade union members, housing activists, students, and community organisers made the clear case against preemption. Many audience members applauded our calls for opposition to any state ban. One of the three legislators present, former House Speaker Frank Chopp, responded that he was willing to go on the record and publicly oppose preemption! Unfortunately Seattle Rep. Nicole Macri and State Senator Jaime Pedersen continued their refusal to take a public position on this critical issue.

Passing a bill which includes a state ban on taxing big business would be a direct attack on our movement, robbing working people of the only legal avenue we have left to fight for progressive taxation in Seattle. It would also be a template for big business to use to pass similar bans in other states.

We need a nationwide response from progressive taxation and affordable housing advocates to stop this dangerous legislation dead in its tracks. We need to urgently build our movement and escalate pressure on Democratic Party politicians to stand with working people and publicly commit to refuse any bill which includes a state ban. If they refuse and this historic sellout takes place, it will again demonstrate the urgency to create a new party of, by, and for working people as an alternative to the two parties of big business.

Here are 3 ways to help: