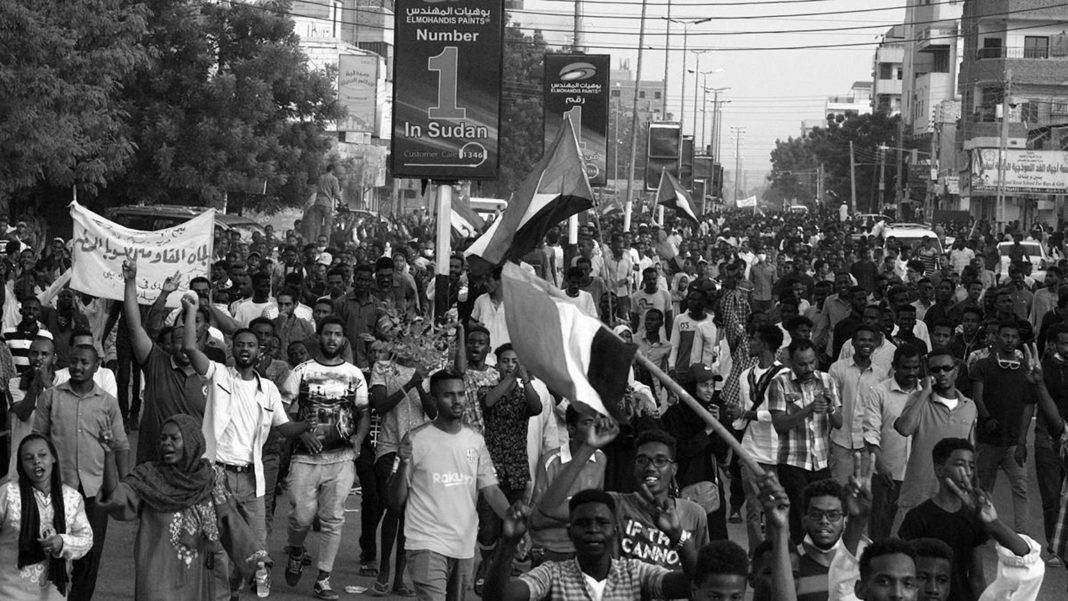 On April 11, after four months of rebellion in Sudan and five days after the start of a historic sit-in in front of Sudan’s military headquarters in Khartoum, Sudanese workers, poor farmers, young people, and small traders ended the 30-year personal dictatorship of Omar al-Bashir. On June 30, millions marched throughout the country in the latest escalation against the rule of the military.

The mass explosion was set off in December when bread prices rose exponentially as grain subsidies were cut in favor of debt service payments. Yet the tinderbox was years in the making. Ordinary people could no longer tolerate mass hunger, unemployment, police and bureaucratic repression, corruption, and selling off public assets and budgets to pay off the IMF.

The revolution has formed grassroots neighborhood committees that organize the resistance and sparked the revival of independent trade unions. Militant young working-class women are playing a leading role in the grassroots uprising. Important strike action has been taken by workers in Port Sudan, oil workers in West Kordofan, and lab techs in the Red Sea state.

The masses want nothing less than freedom, equality, and the complete end of military rule.

The following is a report from activists with Socialist Alternative Sudan (Committee for a Workers International).

Despite the threats of violence from Hemedti and the generals, and despite a month-long internet shutdown, hundreds of thousands of people took part in a day of mass protests across Sudan on June 30 – a “miliyoniya” – a “Millions March” to demand the end of military rule. Huge demonstrations took place in the capital Khartoum, but also in many other towns and cities. This was echoed by a large international solidarity mobilization from the Sudanese diaspora.

The “Millions March” was a resounding success and has shown the determination of the Sudanese people to get rid of the military junta. It has also shown that the latter’s savage repression of the revolutionary movement has so far contributed to the masses’ courage and revolutionary willpower.

The success of these protests should be harnessed to push our advantage further. It should be seen as the beginning of a renewed, mass revolutionary offensive to bring them down once and for all.

After all this great struggle and revolutionary action, we must not accept the slightest concession from our basic demands. Do not listen to the weak voices that say we should “accept reality”! The revolutionary struggle is the only thing capable of creating the reality we need. The overwhelmingly majority of the Sudanese people reject any power-sharing deal with the “Council of Military Killers,” hence we have no reason to accept any agreement negotiated against our will that would go down that road.

Why not use the momentum to campaign for a new general strike but this time coupling it with street demonstrations and occupations of workplaces? By waging a struggle to take control of the country’s economic activity, the working class can lay the ground for the economic and social revolution that is needed to transform the lives of the Sudanese people.

Even if the generals are forced out of their political niches, everything else will not suddenly improve overnight. Any government that defends the continuation of capitalism in Sudan will perpetuate and worsen the mass poverty and all the social ills which the Sudanese masses have revolted against, while leaving a handful of private capitalist bosses, landlords, and international creditors in effective control of the country’s wealth.

Hence the struggle has to continue unabated until a genuinely revolutionary government, made up of democratically elected representatives of the workers and the revolutionary people, can see the light of day. The tasks of the “resistance committees,” which have played an important role in organizing the movement, mobilizing in the neighborhoods, defending against the counter-revolution, etc, should be enlarged and coordinated on a wider level to prepare for that outcome. Those parts of the state forces who sided with the revolution and defended the revolutionaries during the first sit-in, the officers and soldiers of low ranks, should be called upon to build similar committees and link up with the revolution.

The SPA needs to: