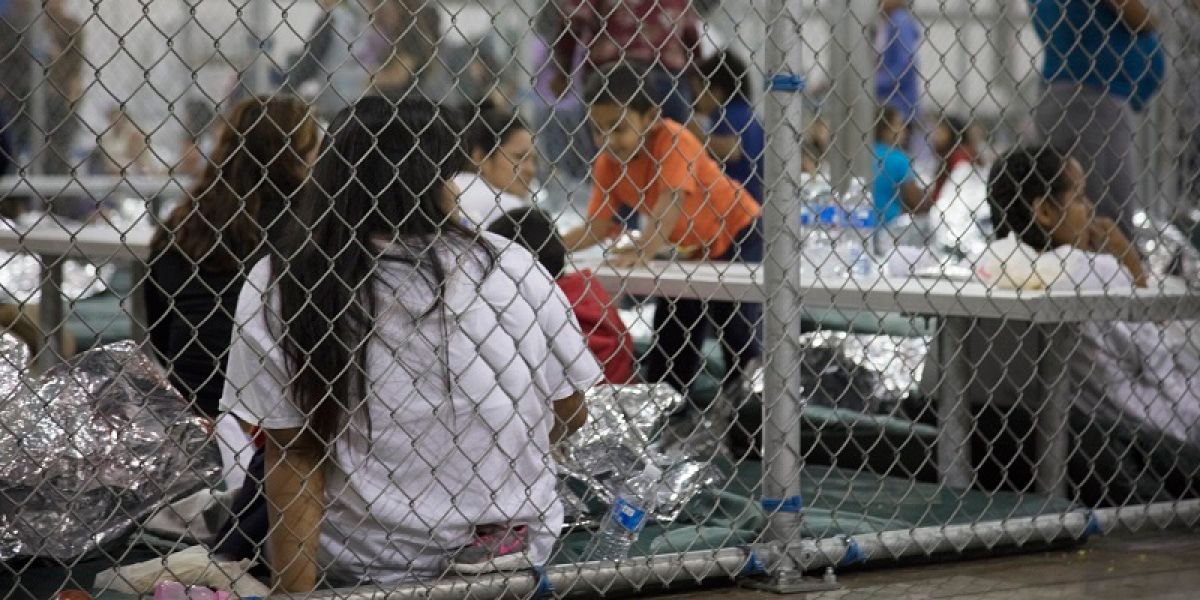 After an outpouring of outrage Trump has been forced to back off one element of his “zero tolerance” policy which criminalizes anyone seeking to cross the Southern border, including asylum seekers. In an executive order signed Thursday, the administration said that children would no longer be separated from their parents in detention facilities.

But what this really means is that children will be held in detention facilities indefinitely with their parents as they await trial for the “crime” of fleeing poverty and violence. It is also not clear when or how the 2,300 children already separated will be reunited with their families. Plans are being made for the detention of 20,000 people.

Under successive administrations – Republican and Democratic – U.S. immigration policy has increasingly been turned into an extension of the criminal justice and prison system. Immigrants are treated as criminals rather than their usual classification as refugees or asylum seekers. This has resulted in a sprawling inhuman detention system, much of which has been privatized, resulting in huge profits being made out of incarcerating immigrants.

As socialists, we totally oppose Trump’s abhorrent policies and his vile and almost daily attacks on the humanity of immigrants. We do so not only for humanitarian reasons, but because these policies are aimed at dividing and weakening the struggle of working class people, whether immigrant or native born.

The New York Times writes :”Federal immigration courts faced a backlog of more than 700,000 cases in May, according to the Transactional Records Access Clearinghouse, or TRAC, at Syracuse University. In some courts, the average wait for an immigration hearing was over 1,400 days; some hearings are being scheduled beyond 2021 before an available slot on the docket is found.”

The establishment Democrats in Congress are leading the charge in denouncing Trump’s policy of separating children. But this is deeply hypocritical given their complete failure to stand up for Dreamers earlier this year. They hope people will have forgotten that in 2014, during the previous wave of refugees fleeing Central America – including tens of thousands of children – the Obama administration detained thousands in very similar conditions. They also deported thousands of children back to Central America, many of them in danger of their lives.

The current wave of immigration from Central America is tied to the neo-liberal policies followed by successive U.S. governments over the last few decades. This includes the war on drugs which has fueled vicious gang violence in countries like El Salvador. But there is also the impact of U.S.-backed trade deals, particularly the Central American Free Trade Agreement (CAFTA) which dramatically reduced tariffs for U.S. products and limited various forms of government regulation. This led, for example, to the displacement of 200,000 rural workers. These workers have largely been forced into manufacturing jobs in “free trade zones,”which often utilize child labor, anti-union intimidation, long hours, and low pay.

We cannot rely on big business and capitalism to solve these problems. It is exactly the dog-eat-dog policies of capitalism – where whoever can use cheap labor or mechanization to bring to market the cheapest product rules – that has created this crisis. Our socialist approach starts from the needs of working people and points toward the need for a fundamental transformation of society.

We call for a public works program to rebuild the infrastructure, build affordable homes, and retool the economy based on green technology on the basis of living-wage jobs. We call for a Medicare-for-all public health care system, full funding of schools, and an expansion of community services to provide for the real needs of working-class families including free drug treatment available to all.

We call for an end to neoliberal policies that have plundered Mexico and Central America, forcing families to flee their homes. These policies have also devastated jobs in the U.S. In fact, as workers we have a common interest in boosting our living standards on both sides of the border. We call for mass movements that force the corporate politicians to act in our interests or risk being replaced. We call for an independent working-class challenge to both the Republican and Democratic Parties which are dominated by the interests of big corporations and banks.

The struggle to defend living standards is intimately tied to the struggle for a society based on the interests of workers – a socialist society. The instrument to challenge the corporate right-wing policies of Trump is united working-class action. The program to achieve that is to fight for the needs of all workers irrespective of race, color, gender, sexual orientation, or country of birth.

The criminalization of immigrants is not in the interests of workers on either side of the border. Workers scared of losing their jobs because of an impending ICE raid will keep their heads down on the job when bosses harass them or steal overtime pay.

A low-paid workforce fearful of asserting their rights is ideal for bosses who seek to drive down wages. The repressive ICE apparatus and the broader militarization of the police is a weapon that will be used against all workers who move into struggle

It has been mass outrage and the threat of mass protests that have forced Trump to reverse his position of separating children from parents at the border. We must use the momentum of the current anger at the outrageous treatment of children to challenge the whole policy of criminalization of immigrants.

End the criminalization of refugees and immigrants.

Unite to Fight the Root Causes of Anti-Immigrant Racism and Scapegoating.