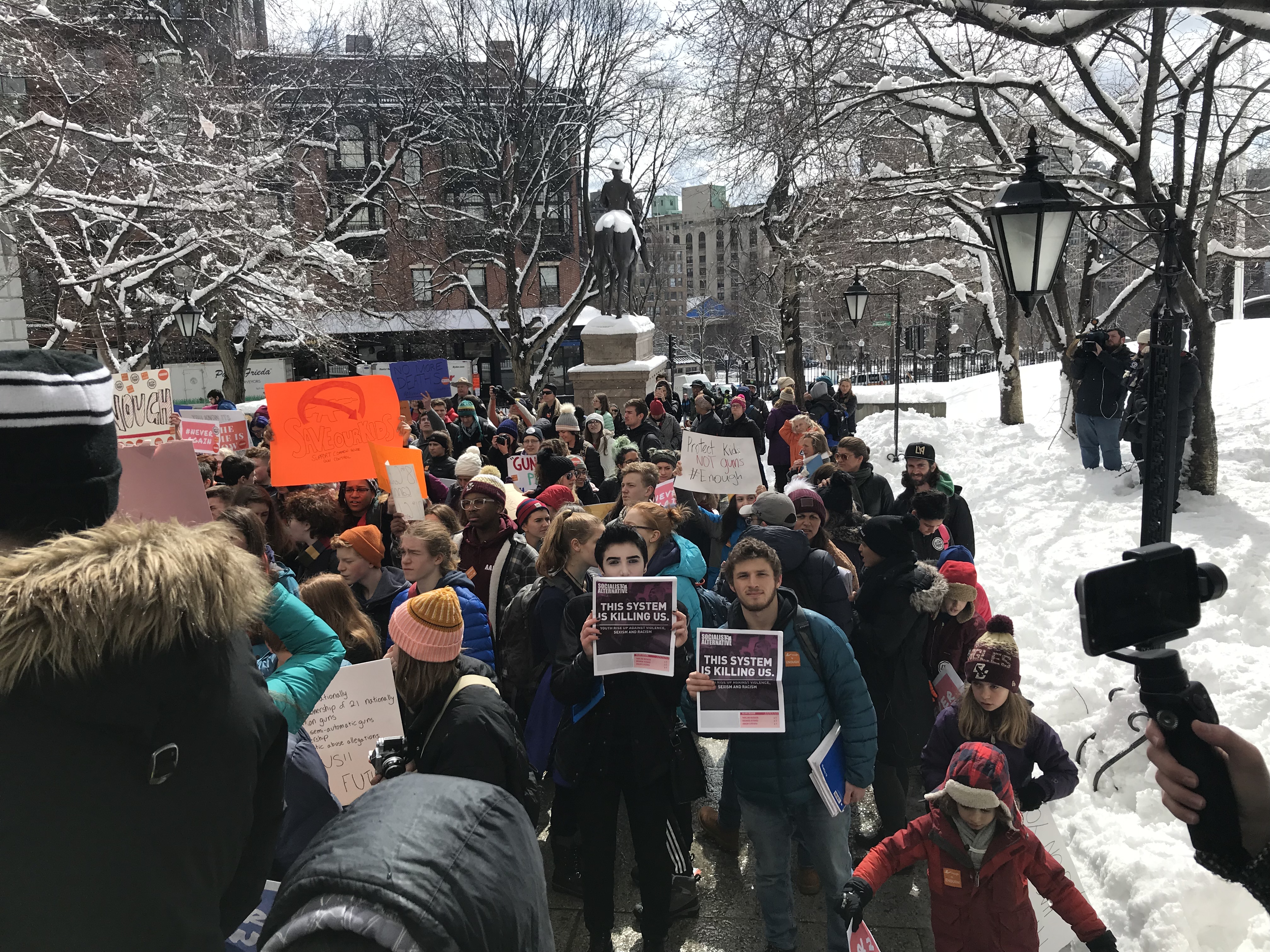 This past Wednesday, nearly a million students walked out of their schools to demand an end to gun violence. These walkouts come after the horrific massacre at Marjory Stoneman Douglas High School last month and are a part of the growing student movement taking aim at violence and the NRA. For a socialist analysis of the Parkland massacre, growing gun violence in the U.S., and strategies for the movement, take a look at our article: Parkland School Massacre: Youth Rise Up Against Violence and the NRA. Below are reports from our members across the country who participated in the March 14 #Enough walkouts. More to come…

On Wednesday, thousands of students from high schools across San Francisco protested against the NRA, the gun manufacturers, and the broader systemic violence of racism and exploitation that they’ve grown up in.  At 10:30 am, students began crowding the steps of City Hall, despite a heavy mid-morning rain. Every ten minutes for an hour, a new contingent of students would arrive, swelling their numbers to roughly a thousand, and forcing the closure of the street. While a few politicians came out to voice their support for the demonstrators, the one hour rally had a majority of student speakers.  Almost everyone highlighted the criminal role the NRA has played in profiting off the deaths of students. Several student speakers linked their call for gun control, with the need to end racism and sexism, and situated gun violence within the broader systemic violence caused by capitalism.

After the rally ended, students began their march to San Francisco’s Ghiradelli Square –one of the more popular tourist destinations in the city.  Storming down Market Street, students took turns leading chants of “Hey, Hey, NRA, How Many Kids Did You Kill Today?”, along with “What Do We Want? Gun Control. When Do We Want It? Now!”, and “No More Silence!  End Gun Violence!” The marching students were greeted with cheers from adult-passersby, and several bus drivers and other city workers waved in support. The energy of these young high school students was demonstrated in more ways than one.  Several times they marched beyond the police who were stopping traffic in front of them.

At the march’s end, student leaders made clear that this was just the beginning, and pointed to the March for Our Lives on the 24th as a next step towards building a youth-led movement for gun control.  One speaker received strong applause when he spoke to the need to keep their movement independent from the politicians.  Though voting in 2018 was mentioned as a necessary step in winning gun control measures, it seemed clear they did not view Democratic politicians as their savior.  As one student remarked, “We’ve shown the adults that we won’t wait for them to do the right thing. We will continue protesting and organizing until we can feel safe in our schools.”

Thousands of students across Columbus, Ohio took part in the National Day of Walkouts against gun violence this Wednesday. The Columbus City Schools (CCS) board declared Wednesday to be a district-wide “Safer Together Day” in support of the walkouts, but it was student leaders in high schools across the district who took action in planning the walkouts and rallied their classmates together to speak out against gun violence and the NRA. At many CCS schools, students and teachers marched side by side while chanting “Safer Together” and “Enough is Enough”. Organizers with the local Youth EMPOWER group, a youth organization of the Women’s March, played an important role in helping coordinate, promote, and support the student organizing efforts. At South High School, a predominantly Black high school on the south side of Columbus, approximately 200 students walked out of classes in freezing temperatures and gathered on the track field for 17 minutes in honor of the Parkland shooting victims. Socialist Alternative Columbus spoke with some of the South High walkout organizers, who were inspired to organize the walkout after witnessing the growth in student action against gun violence in response to the Parkland shooting. Student organizers voiced a need for continued action, in the form of walkouts and rallies, to push legislators to pass meaningful gun reform to address the epidemic of mass school shootings. There was an understanding that youth will need to keep building pressure and organizing walkouts, protests, and occupations to force politicians to acquiesce to demands for gun control.

Students put forward demands to raise the age limit for gun ownership to 21 and require universal background checks. While there was overwhelming support for a ban on assault weapons, students correctly recognized the persistent action that will be needed to effectively challenge the corporate status quo politicians who accept thousands in donations from the NRA. Many students also called for broader demands to address school and community safety. About 300 students descended on the state capital building to speak with representatives and to hold a rally on the steps of the Statehouse. During the rally, students included calls to demilitarize schools and fund social workers and counselors. The rally ended with chants of “Counselors Not Cuffs!” Interestingly, the Republican-led Ohio Senate decided to abruptly cancel a planned Senate session on Wednesday after hearing about anticipated student action. To continue building action in Columbus, students are preparing for the March For Our Lives on March 24. Organizations including Socialist Alternative have been working alongside students from across the region to mobilize the largest possible turnout on the 24th. Currently, over 16,000 people have indicated on Facebook that they are either going or interested in the Columbus march, making this potentially one of the largest rallies in recent Columbus history.

As 300 students and supporters stood silently on the stairs leading up to Garfield High School, students read out the names, one each minute, of the victims of the Parkland, FL school shooting. Students held signs, an equal number printed and handmade, with slogans like “#Enough”, “Arm me with books not bullets,” “Not today NRA,” and “Fear has no place in our schools #NeverAgain.” Despite the nationwide call only being for a 17 minute walk out, students from across the city stayed out and converged on the University of Washington for a more sustained protest and march. Even without formal coordination or an organizing body that took up leadership of this action, 2500 Elementary, Middle and High schoolers from all over Seattle joined up at the university, from where they took to the streets.

Many high school students Socialist Alternative spoke to identified as socialists. Some even were conscious of capitalism as a root cause of alienation and gun violence, as well as seeing the need for fundamental system change. Perhaps even more telling is that despite a lack of coordination between schools – many did not have contingents march together to the university, just small groups of dedicated individuals – the action was nonetheless strong enough to win  significant media coverage, and even the support of some school administrators who agreed publicly not to take any action against students who walked out.

Students were looking as far forward as the walkout planned for April 20, with some even discussing the possibility of organizing teach-ins and holding public rallies, and recognizing the need for organization to make the movement successful. All in all, despite individual students’ concerns about taking further action than initially planned, these events indicate a broad willingness of youth to take their own initiative when fighting for their lives and their future.

Well over a thousand students walked out of Lane Tech this morning in a student organized, albeit administration sanctioned event. At the outset it appeared teacher and parent marshals were going to be able to keep activists and onlookers away from the student body entirely, restricting the walkout to a rally on the massive lawn outside the school, and maintaining a perimeter on the sidewalk at least a hundred feet away. This lasted up until the rally became a march around the perimeter of the school. But when the march began, the marshals could no longer contain the students and they spilled onto the sidewalk.

The response to our flyer and our slogans “End gun violence,” “sustain the student movement,” and “fight back against capitalism” was met with enthusiastic support. The chant that ruled the day was “No more silence! End gun violence!” It was repeated for almost the entire march, showing that the fighting mood that’s developed around the Parkland shooting has found an echo and expression here in Chicago. The students leading the march tried to start the chant “vote them out!” implying NRA supporting politicians, or Trump and the GOP in general. This chant found no response among the mass of students, only the dozen or so student organizers at the front of the march bothered with it. It was clear the mood was with organizing a movement in the here and now, not with midterm elections still over seven months away. Overall the enthusiasm was palpable among a majority of students and it was clear that a fighting mood is developing among a large section of students at Lane Tech.