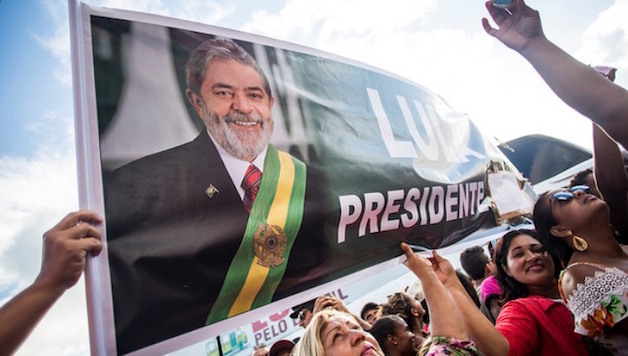 On 24 January, the conviction of ex-President, Luiz Inácio Lula da Silva, linked to the ‘Lava Jato’ corruption case, was upheld by a Federal Tribunal.

All the judicial theatrics during the trial could not hide what is obvious to all. The objective of the second conviction of Lula is to eliminate from the 2018 Presidential elections the candidate who, regardless of how we see him, leads all opinion polls.

Agents of the judicial power, who nobody elected and are submitted to no popular control, want to take decisions themselves which can only be taken by a popular vote.

The political nature of this case is even clearer when we see that not one leader of the PSDB or not one banker (who are notorious players in corruption) have been condemned, imprisoned or removed from their position under ‘Lava Jato’.

While maintaining all of our political differences and criticisms of Lula’s political project, we also unwaveringly explain that the actions of the bourgeois justice system in Lula’s case opens a dangerous precedent for the Left, social movements and democratic rights of the Brazilian people.

It is part of a wave of attacks which only benefits a handful of capitalists and their servants. On top of the neo-liberal counter-reforms implemented by the government, attacks on democratic rights are multiplying, especially hitting the poorest.

The persecution of those who dissent, organise and mobilise hits workers, young people, women, indigenous people, LGBT people, artists, intellectuals etc. The imprisonment of Rafael Braga became a symbol of this situation. Another dramatic example was the criminalisation of 18 youths from Sao Paolo who were persecuted for protesting against Temer and victims of an agent infiltrating in their midst. New repressive legislation which comes from the Dilma government, such as the anti-terrorist law, is now being used against protestors. The use of the army to repress the march in Brasilia in May 2017 is a dark precedent.

Lula is no alternative

Lula is not a conscious factor in the radicalisation of the struggle or even a consistent opponent of the current political and economic order.

Despite its peculiarities, the governments of the PT did not carry out any type of rupture or structural change. Lula’s Presidency was characterised by a search for class conciliation (whereby supposedly everyone would win, the billionaires and the poor) and conciliation between political forces. Suffice to remember that Temer was Lula’s chosen Vice Presidential candidate.

This did not change following the parliamentary coup which removed Dilma. Lula, as a political leader, continued to preach class conciliation without having learned any lessons from his experience in government. His recent dealings with politicians like Renan Calheiros make this clear.

With the impeachment manoeuvre in 2016 the ruling class wanted to re-arrange the political landscape in order to be able to make a qualitative step forward in their attacks on the working class in the context of the Brazilian and international capitalist crisis.

The big bourgeoisie wanted more than the PT government could give. They no longer only wanted the maintenance of their privileges in a climate of apparent social conciliation. They wanted to impose a drastic defeat on the working class, a historic step backwards from an economic, political and social point of view.

The corrupt, unpopular, coup plotters’ government of Temer served this purpose, guaranteeing the approval of a Labour counter-reform, the freezing of public spending, privatisations and handovers of public wealth to foreign capital.

However, the project of big capital doesn’t end there. For them, it is fundamental that in the 2018 elections there is no risk or threat to the continuity of these attacks from any future government. Despite the conciliatory tone from Lula and his already demonstrated sympathy for neo-liberal style policies, he cannot (even if he wanted to) defend a deepening of these policies. This is why, as favourite for the elections, he has to be removed from the equation.

Unity in struggle – continue the fight for an independent Left alternative

LSR (CWI in Brazil) never supported the governments of Lula or the PT. As part of PSOL (Party of Socialism and Liberty) and of the struggle for the rebuilding of a mass socialist left in Brazil, we were a Left opposition to the PT governments and were on the side of the struggles of workers for rights and demands denied by these governments.

In the electoral process this year, we support the unanimously adopted position of PSOL, for the party to have its own Presidential candidate and therefore not to support Lula or the PT.

We understand that the Lula-ist model of class collaboration and maintenance of order does not serve the interests of the working class and majority. These policies disarmed the working class, demobilised the social movements and created the conditions for the coup of 2016 and the defeats we have suffered.

With the catastrophe of the Temer government, illusions in a supposed return to the “good times” of Lula represent a serious obstacle to the struggle of workers. There will be no good times if we do not break with the logic of social, racial and political segregation which is part of the structure of peripheral and dependent Brazilian capitalism. With the international capitalist crisis, this is even clearer.

Therefore, our alternative is a United Front of the Socialist Left which unites the socialist Left and social movements in an anti-capitalist socialist alternative for Brazil. This would be at the service of the struggles of the working class, but would also need an independent electoral expression this year.

In the struggle to build this Front, its forces must fight against all attacks, including attacks on democratic rights. This is the case for the right to organise and mobilise, the right to freedom of speech and fundamental political rights.

Denouncing the removal of Lula as a candidate is part of this struggle. However, this position does not mean supporting the political project of Lula or defending the positions of Lula or the PT. The PT adapted itself to a rotten system when it reached power. It carried out substantial corruption, abuses of power and favoured private interests over public ones, combining manipulation with repression of the poor.

The building of a new Left alternative in Brazil must be based on the struggle to overcome this political and economic system, a task which the PT did not accept and does not plan to accept.

During the resistance to the attacks of the Temer government, LSR has defended the maximum unity in action. The struggles at the beginning of 2017, especially the general strike on 28 April, were a show of strength by the working class and a demonstration of the potential for struggle that exists when there is unity between different movements and sectors.

In the struggle against the attacks on democratic rights, this unity in action is also necessary. We are prepared to struggle together with any sector which is against the criminalisation of the social movements and the persecution of activists in factories, schools, neighbourhoods and the countryside.

This is the case in relation to general political rights, such as the threat of banning the candidacy of Lula. Unfortunately, what we have seen is that the leadership of the PT has tended to consciously transform the democratic struggle against this into a part of Lula’s own electoral campaign. This can only lead to one thing: a new defeat.

The illusions that the only hope for the Brazilian people is to vote for Lula in October is an obstacle to the struggle and resistance. This illusion already weakened the struggles of 2017 and contributed to the movement not winning victories.

The imposition of a sort of “single candidate” of the “popular movement” which stigmatises the Socialist Left which is opposed to the Lula-ist project of class collaboration, can only weaken the resistance to the government’s attacks.

Transforming the struggle against anti-democratic attacks into a part of Lula’s election campaign, prepares the ground for new defeats which will affect us all.

PSOL and the Socialist Left must not participate in this. We must present a clear and consistent path of struggle.

What is needed is a mass movement against all the political, economic, social and cultural attacks underway. A movement in which Lula’s name does not over-shadow that of Rafael Braga or the 18 imprisoned youths of Sao Paolo. A democratic movement, organised from below, which deepens the level of mobilisation beyond what we saw in 2017. A movement which defeats the pension reform, cancels the counter-reforms imposed by the corrupt parliament and at the same time fights for guaranteed rights for all.