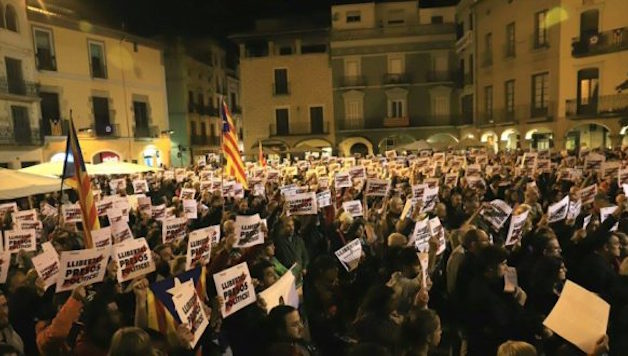 There have been large protests in Scotland in solidarity with the movement in Catalonia, particularly among youth and workers involved in the YES campaign in 2014. Many are enraged by the repressive clampdown of the Spanish state and inspired by the mass mobilisations of the Catalan workers and youth in general strikes and protests. The declaration of independence by Puidegemont and the Catalan government – under pressure from below by the mass movement – has also provoked examination of the Scottish Government’s response.

Although the SNP leadership have rightly expressed solidarity in resolutions to the Scottish Parliament and local councils with the political prisoners in Catalonia, have condemned state repression and have stated that the Catalan people have the right to decide their own fate, the SNP-led Scottish Government have not recognised Catalonia as an independent republic. This is despite 22 SNP MSPs signing a motion to that effect.

The latest Scottish Government statement on 28th October said: “We understand and respect the position of the Catalan Government. While Spain has the right to oppose independence, the people of Catalonia must have the ability to determine their own future. Today’s Declaration of Independence came about only after repeated calls for dialogue were refused. Now, more than ever, the priority of all those who consider themselves friends and allies of Spain should be to encourage a process of dialogue to find a way forward that respects democracy and the rule of law. The imposition of direct rule cannot be the solution and should be of concern to democrats everywhere. The European Union has a political and moral responsibility to support dialogue to identify how the situation can be resolved peacefully and democratically.”

EU back Rajoy and the PP

While calling on the EU to intervene to defend the democratic rights of the Catalans there has been no condemnation by the SNP leadership of the real position of the EU establishment, which has been to support Spanish state repression. Various EU figures and statements have exposed their pro-Rajoy position. “This is an internal matter for Spain that has to be dealt with in line with the constitutional order of Spain”.“If a referendum were to be organised in line with the Spanish constitution it would mean that the territory leaving would find itself outside of the European Union.“Beyond the purely legal aspects of this matter, the Commission believes that these are times for unity and stability, not divisiveness and fragmentation.”

Of course this is the same EU the SNP leadership has defended as a progressive democratic alternative to the British state institutions. An EU that the SNP are desperate to retain membership of following the UK Brexit vote of 2016. The Catalan crisis has further exposed the EU as a undemocratic repressive bosses’ club in the eyes of many pro independence supporters in Scotland and has shown it was correct for Socialist Party Scotland to campaign for socialist exit from the EU.

The SNP leadership’s position on Catalonia is likely to lead to disillusionment among radical workers and youth. Neither have the statements of Sturgeon and the SNP leadership ever raised the need to support the general strikes and mass protests in Catalonia, the largest on 3rd October involving millions and the student mobilisations that have involved tens of thousands. The sister organisation of Socialist Party Scotland, Revolutionary Left and the Student’s Union that it leads, has played a leading role in these mobilisations.

The SNP’s reluctance to recognise Catalonia’s independence is rooted in the revolutionary potential of the movement that threatens the capitalist system. Puidgemont and the Catalan government vacillated on the question of a declaration of independence and were forced by the repression of Madrid, the enacting of Article 155 and the jailings, but also fundamentally by the mass movement from below that threatens their power.

The calling of the referendum in Catalonia itself was to try and divert pressure away from the building rage at the Puidgemont government for passing on austerity from the Spanish state. The SNP leaders confronted with an “independence” forced by a mass anti austerity movement in Catalonia that challenges capitalism, identify more with the interests of EU capitalism and the Spanish state than the Catalan workers and youth fighting for freedom from low pay, evictions and unemployment.

This reflects the pro-capitalist policies of the SNP leadership who wanted all along to maintain a cordial relationship with the British capitalist class, even under an independent Scotland. Such a scenario in Catalonia and the Spanish state is radically different as we have explained. While the British ruling class reflecting a tradition of bending to a certain point to alleviate pressure came to a legal agreement to hold a referendum in Scotland, the Spanish capitalist class, still containing Francoist elements and facing the threat of secession of one of the most economically important parts of their state, repress first and then deal with the political fallout.

The approach of the SNP leadership towards the independence referendum in 2014 has a bearing on their position on events in Catalonia today. Polls a fortnight before the Scottish independence referendum in 2014 showed support for a Yes vote at 51%. A “Project fear” media campaign and by the bosses in workplaces was ramped up by the capitalist class in Britain and internationally including the EU institutions. Major banks and financial institutions in Scotland such as RBS and Standard Life threatened to leave and the headlines in all the major newspapers warned of economic collapse in the event of YES vote.

But the SNP leaders did not really have an answer, reflecting their pro capitalist position. This left a layer of the Scottish working class unconvinced in the viability of capitalist independence. As Socialist Party Scotland explained, the only response to the blackmail of big business was the demand for the nationalisation of the banks and big industry in an independent socialist Scotland.

A YES vote in Scotland would have provoked a crisis for the British ruling class and the capitalists internationally. The SNP government would have also been confronted with the aspirations of workers and youth the referendum had unleashed. Their pro capitalist agenda in an independent Scotland would have come into sharp conflict with a mass movement in favour of radical left and anti-austerity demands.

The British ruling class having learned the lessons of 2014 will fight hard against another referendum. But the question is now increasingly raised would the SNP go into a confrontation if a second referendum was refused by Westminster and mass support existed for it in Scotland? The mood in favour of a new referendum in Scotland has in fact ebbed recently. Nicola Sturgeon has shelved plans for a indyref 2 in the short term at least. This is linked to the backlash and feeling of betrayal developing towards the big business policies of the SNP from significant sections of workers and youth.

Parallels can be drawn with the mistaken strategy of many of the pro independence socialist left in Scotland, who since 2014 have largely acted as a left cover for the SNP and their implementation of cuts, and the current situation in Catalonia. The radical left and pro-independence CUP participate in a parliamentary pact with the right wing PdeCAT and Puidgemont. Yet the Puidgemont government have carried out savage austerity, which the CUP has signed up to.

Izqueirda Revolucionaria (Revolutionary Left) in the Spanish State calls for a mass left front to be built in Catalonia involving the working class and youth, the trade unions, students unions, the CUP, the referendum committees and other left, anti capitalist forces, separate from the Catalan capitalist parties, to fight for a socialist republic.

In Catalonia and Scotland the struggle for the right to self determination for the working class and youth must be independent from forces who wish to maintain the failed capitalist system, that is the key lesson from 2014 and the current uprising in Catalonia. The current exile of Puidgemont, whose government has implemented austerity, and the SNP’s willingness to carry out Tory cuts shows we cannot wait or trust in capitalist leaders to win “independence”

It is also the lesson of the Russian Revolution 100 years ago, where a “prison house of nations” was liberated by the Bolsheviks who ended capitalism and landlordism as well as implementing the right to self determination. Today, in Scotland and Catalonia, that means fighting for an independent socialist Scotland and a Socialist Catalan republic but as part of the struggle for a voluntary and equal socialist confederation of Europe and a socialist world.