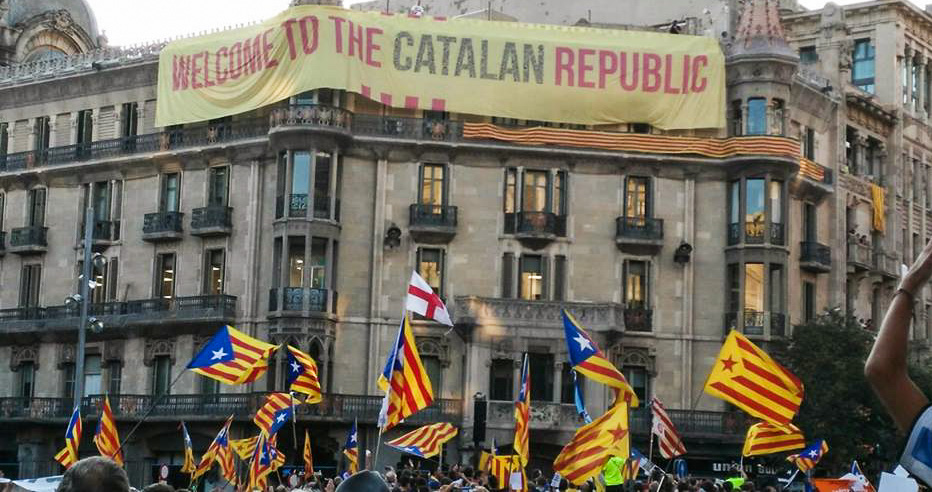 As we go to press, the Spanish state has massively stepped up the repression directed against the Catalan Republic. It has dissolved the Catalan regional government, brought charges of “rebellion” and “sedition” against its leaders which could lead to 30 year jail sentences and placed its civil service and police under direct control from Madrid. For ongoing analysis of developments and a strategy to mobilize the working people against repression and for a workers republic go to SocialistWorld.net.

The Parliament of Catalonia voted to declare an independent republic on October 27. This historic event, a moment in the history of the Spanish state and Europe, will have lasting consequences. First and foremost, it is a conquest of a mass revolutionary movement of the Catalan people – the youth and working class – which has heroically resisted the Francoist repression of the Spanish state and right-wing PP government.

However, revolutionary socialists must always delve deeper, see further, and give a perspective on the tasks and challenges facing the working class of Catalonia and the Spanish state in consolidating this historic step, to carry out a real revolution in Catalonia and beyond.

Lenin spoke of the Russian Empire before the 1917 revolution as a “prison house of nations.” While far from the scale and level of oppression of those times, the Spanish state has shades of this description. Since its formation, it has been based on the subjugation of oppressed nationalities – Catalonia, the Basque country, and Galicia – within its borders.

In periods of revolutionary upheaval throughout Spanish history, the demands of these peoples for their rights have intertwined with the needs of the working class throughout Spain. The Catalan Republic was last declared in 1934 in the midst of such a revolutionary period, which culminated in a working-class socialist revolution against General Franco’s military coup.

The revolution was defeated and Franco’s military dictatorship, with the support of the ruling class, unleashed a long night of national oppression. The Catalan and Basque nations were written out of history, their languages were banned, and thousands were tortured and murdered. In the 1970s, another revolutionary period brought down Franco’s regime, but the revolutionary aspirations of the working class and oppressed nations were again betrayed by the reformist leaders of the left and the labor movement, who feared a real break with capitalism. Spanish capitalism and national oppression were preserved throughout the “transition” to capitalist “democracy,” which granted limited autonomy to the Catalan and Basque people.

Now the Spanish government, led by the political children of Franco, has used thousands of military police to beat and repress millions of people for the crime of wanting to vote in the October 1 “illegal” independence referendum in Barcelona. In doing this, Spanish capitalism was showing its Francoist DNA. As in the 1930s and 1970s, defeating national oppression will mean challenging the power of the corrupt, rotten Spanish ruling class, as well as its capitalist lackeys in Catalonia and the Basque country.

Socialists and the National Question

For some, the relevance of the struggle of nations for their rights – the “national question” – to socialists and internationalists can be unclear. Aren’t we interested in uniting over borders rather than creating new ones? In the Spanish state today, many leaders of the left, including the Communist Party and Podemos, make similar, confused arguments against the proclamation of the Catalan Republic.

The approach of Marxists, most clearly set out by Lenin before the Russian Revolution, is that real and lasting unity of workers and the oppressed can be achieved only by the respect for the rights of all. Only by defending the rights of oppressed nations to separate from Russia were Lenin and the Bolsheviks able to unite the oppressed of all nations against the Tsarist and capitalist system.

The defense of Catalonia’s right to decide its own future is also a fundamental democratic issue. As with all forms of oppression, Marxists seek to emphasize the role of the working class as the only social force capable of ending national oppression as well as the need to link the fight against oppression to eliminating its cause: capitalist domination. The billionaire capitalist class in an oppressed nation cannot be relied upon to defend the interests of its people. Socialists fight for the liberation of all peoples while at the same time defending the maximum unity in the struggle against capitalism and for socialism.

The Committee for a Workers’ International has a proud history of elaborating the Marxist approach to the national question – In Scotland, Ireland, Sri Lanka, Palestine/Israel and many other areas – combining the fight for the rights of all nations with the need for a united international struggle for socialist unity on a world scale.

The Way Forward – A Socialist Republic of Catalonia

In the past weeks and months, the power of the movement in Catalonia, which has led to the proclamation of a republic, has been in the mass mobilization and action of workers and young people. It is they who have provoked the ire of the Spanish ruling class, who defeated repression on October 1, and won the sympathy of workers and the oppressed around the world. The high point of this struggle was the enormous general strike on October 3 which paralyzed Catalonia.

Conversely, the thorn in the movement’s side at every stage has been its official “leadership.” Led by the capitalist nationalist party, PdeCAT, the Catalan government has at every stage delayed, diluted, and betrayed the mass movement. Their leadership alienates working-class people who have been victims of their austerity from the movement for national liberation.

Catalan big business, who they represent, fearful of their profits, are engaged in open sabotage of the Catalan Republic, moving billions of dollars and thousands of firms outside Catalonia as blackmail against independence.

This question of leadership is the burning question which must be resolved if Catalan freedom is to be achieved. The Catalan working-class movement and left must challenge these capitalist politicians for the leadership of the movement. Our co-thinkers in the Spanish state, Izquierda Revolucionaria, who lead the Sindicato de Estudiantes, which has organized two student general strikes, have emphasized this point throughout the movement.

The Catalan Republic can only win the solid support of the working class in Catalonia, and an echo from the working class in the rest of the Spanish state, if it means a real change in the lives of the majority. It needs to be based on a program not only to achieve Catalan independence but to end poverty, unemployment, and discrimination. The failure of the leadership of the movement to put such a program forward can allow the forces of reaction and Spanish nationalism to appeal to the working class in Catalonia who may have genuine fears about the consequences of independence for their jobs and livelihoods.

A combative socialist program can also be the basis for unity in struggle of the Catalan working class with the workers of the Spanish state, against the common enemy – capitalism and the PP government. A Socialist Republic of Catalonia, far from provoking hostility from workers in the rest of Spain, would inspire workers to fight for similar change at home. It could be a lever for the Spanish revolution and open up the possibility of real and lasting unity between the workers of the Spanish state, in a free and voluntary socialist federation.

The Spanish capitalists and their Catalan colleagues will throw everything they have at this mass movement. Only a working-class-led struggle for a socialist republic, linked to the fight for international socialist change, can face up to this repression and open up a new revolutionary chapter in European and world history.