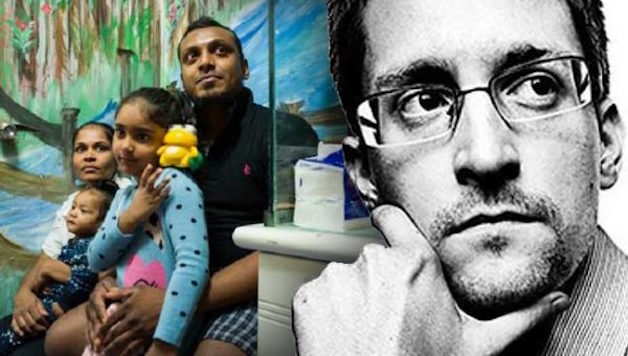 A group of seven Hong Kong refugees, known worldwide due to their connection to US whistle-blower Edward Snowden, have had their applications for asylum rejected by the Immigration Department. Lawyers for the four adults and three children have lodged an appeal against the decision and publicly slammed the Immigration Department’s actions as “completely unreasonable”.

The refugees are local heroes having sheltered Snowden, the former NSA contractor, in Hong Kong during the summer of 2013 after his revelations made him the “world’s most wanted man”. They are three Sri Lankans, Supun Kellapatha, Nadeeka Nonis and Ajith Pushpakumara, and Filipina Vanessa Rodel. Kellapatha and Nonis’s two children and Rodel’s daughter, all born in Hong Kong, are ‘stateless’ under the government’s inhumane asylum rules.

Vanessa Rodel is well known in Hong Kong’s refugee community as a fighter for refugee rights, active in numerous campaigns organised by Socialist Action and the Refugee Union. The case has become an important symbol of the struggles of the city’s 11,000 refugees and an antidote to the sustained smear campaign by the racist political establishment and media which portray refugees as ‘fake refugees’ and ‘criminals’.

Socialist Action, which co-organised the first ever protest in support of Snowden in 2013, has initiated demonstrations and other protests in support of the seven and highlighted the government’s cruel treatment of refugees as a whole. Hong Kong does not grant asylum and is not a signatory to the UN refugee convention. Refugees are only screened for torture and persecution claims and made to wait years or even decades in which time they are kept in poverty and forbidden by law to work.

“We don’t understand why the Immigration Department need to process these cases so quickly – the decision time is very close after their connection to Snowden broke out,” said lawyer Jonathan Man who represents the refugees.

Robert Tibbo, another lawyer for the group who is also Snowden’s lawyer in Hong Kong, said the decisions “were consistent with the zero acceptance rate in Hong Kong. Other cases of strong merit have been rejected.”

Supporters of the seven believe the Immigration Department’s ruling is connected to the intense media publicity about their role in protecting Snowden – there is no other connection between the four adults and yet their cases have been processed at the same time. A campaign group has also been set up in Canada to pressurise its government to offer them asylum, but so far the Canadian authorities have not responded.

Their case was featured in Oliver Stone’s movie Snowden, and Edward Snowden has spoken up forcibly on their behalf.

“These are good people who were driven from their homes by torture, rape, abuse, blackmail and war – these are documented, these aren’t allegations. These are facts,” Snowden said in a recently published video broadcast.