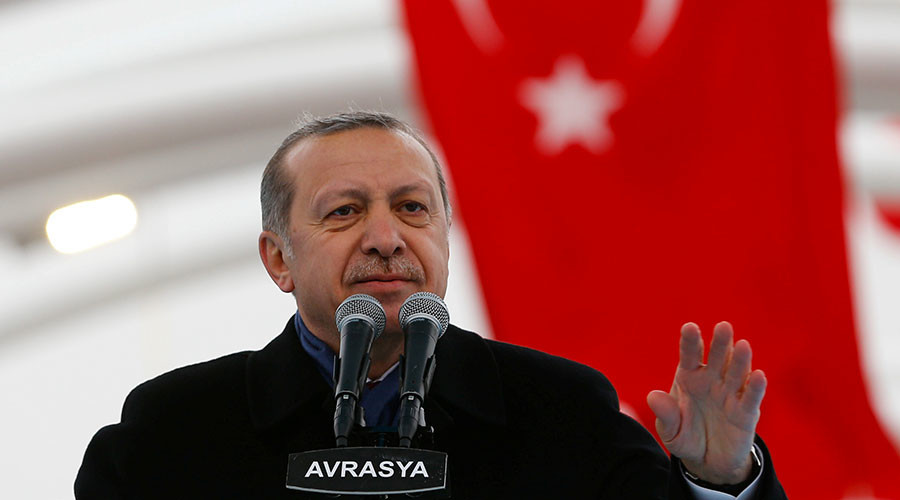 If the referendum called by the Justice and Development Party (AKP) government results in a “NO” (“HAYIR”) vote, on April 16, it will be a massive blow to the regime and a boost for the struggle of the young and the poor for a better life. Such an outcome would constitute the beginning of the end of President Recep Tayyip Erdoğan’s corrupt and polarizing regime, which is based upon repression, chaos and fear.

What will take place on 16 April is no ordinary poll. On the contrary, it may also mark the start of Erdoğan’s desired dictatorship. This is why a NO vote is so important; to help cut across this process before it is too late.

Erdoğan and his AKP officials often say that they are the victims of the Gülen movement [an Islamic religious and social movement led by Turkish preacher Fethullah Gülen, who has lived in the United States since 1999]. Gülen is accused by the Turkish government of being behind the unsuccessful military coup attempt, on July 15, last year.

The truth is the AKP’s 15-year political rule is made up of promoting false hopes. April 16 is the point at which Erdoğan and AKP desire to secure unlimited power.

Crumbs to the Poor

The poor masses undoubtedly top the list of Erdoğan’s who-to-fool list. Coming into power after an economic crisis, the AKP gave millions of dollars to the bank accounts of his supporters thanks to the economic growth, while the working class and the poor had to confine themselves with crumbs of it. And when it came to the poor, the ruling class knew exactly how to take those crumbs back: inflation, mortgages, indirect taxes etc.

The AKP made a fortune out of the poor and channelled that fortune to the rich in forms of subventions, grants, remissions of tax etc. In today’s Turkey, the amount of tax a white collar worker pays is much bigger than the tax a capitalist pays. However, while pointing to the economic failures of previous governments and sky-high inflation, the AKP also pointed at the crumbs received by the poor to portray themselves as the ‘party of the poor’.

The Kurdish people are another part of the population the AKP tried to fool. By means of small concessions, such as creating a Kurdish TV state channel, and portraying themselves as a party that stands for a peaceful resolution of the Kurdish question, the AKP became the second-party after the pro-Kurdish HDP (Peoples’ Democratic Party) in Northern Kurdistan, and won enough Kurdish votes to remain in power for 15 years. When the HDP decided to stand in elections as a party instead as individual independent candidates, they surpassed the anti-democratic electoral threshold of 10% and grabbed most of the AKP seats in northern Kurdistan. This destroyed Erdogan’s plans. His reply was to stop the peace resolution process and to rapidly switch to military repression against the Kurds.

Another section which has been fooled by Erdoğan is the left liberals, most of whom are either in jail or suppressed. Many of these people had played a significant role during the 2010 referendum, when Erdoğan declared his victory against military domination. Likewise, all of the AKP’s founding cadres, including the ex-president Abdullah Gül and ex-speaker Bulent ArÄ±nc, have been purged from politics. They are now waiting in the wings to be the next leaders of Turkey.

The AKP and Erdoğan defeated the Kemalist military-bureaucracy, another ruling class faction within the state bureaucracy, by all kinds of lawless methods, in cooperation with the Gulen community, whose members infiltrated into all layers of the state. In order to do that, the AKP and Erdoğan manipulated law court trials. Many people were put on trial, whether or not they are implicated, and this was the way the AKP government declared its ‘victory’ against its opposing faction of the Turkish ruling class. Many of the Gulenists who infiltrated the police and judiciary and led this purge are also in prison now, following a power struggle between them and Erdoğan’s faction that erupted in 2010.

Today there is a new alliance between the leader of the far-right party MHP, Devlet Bahceli, and Erdoğan. Although possible future alliances are not clear at the moment, if Erdoğan receives his desired referendum outcome he will have unlimited power.

If those key articles come into force, all the powers – legislative, executive and jurisdictional – are concentrated in one man, President Erdoğan. In other words, the president will be the government, the court and the parliament. The president will be authorized to terminate the parliament, which will serve for Erdoğan as the sword of Democles over the MPs’ head. And the MPs will lose all their parliamentary functions. Ministers can be appointed even if they are not MPs. In this case, the president would use this power to appoint his relatives, just like Azerbaijan’s president, Aliyev, who recently appointed his wife as vice-president. Furthermore, since the president will also be the president of a political party, the state apparatus will be converted into a party state. This will mean that non-members of the ruling party will be second class citizens. The president or a minister can only be impeached by 400-600 MP votes. Even if such a miracle happens, the impeachment will be prosecuted by the Supreme Court, which would be controlled by Erdogan. This means the president would not be held to account and his regime would, in effect, be a dictatorship.

The Real Polarization is Between the Rich and the Poor

The Turkish economy has been slowing down for some time, which means there is no room left for the previous populist policies of the AKP government. Their ultra-nationalist approach and use of military repression against the Kurds led to the loss of AKP votes in Kurdish cities. That is why the only strategy of Erdoğan’s regime for the referendum is to whip up paranoia among the masses, of “everybody is against us,” denouncing those intending to vote NO as “terrorists”, and using the resources of the state for their campaign.

Erdoğan’s YES referendum campaign uses provocations and cynicism. For a while, Israel was the main enemy, and then the “old brother” Syrian President Assad was the next one. Russia was the accused of digging a pit for Turkey to fall into since it supported the Assad regime in Syria.  But since Russia and Syria tolerated Turkey’s “Euphrates Shield” [Turkish military intervention in Syria, code-named by Turkey as Operation Euphrates Shield, was an ongoing cross-border operation by the Turkish military and allied Syrian groups in the Syrian civil war], the AKP government back-pedaled. Now the AKP is critical of the United States for collaborating with the Kurdish armed force, the YPG (The People’s Protection Units)/ PYD (Democratic Union Party), in northern Syria. Lastly, due to conflicts with Germany and the Netherlands over holding YES rallies among the Turkish people in those countries ahead of the referendum, the Erdoğan regime tries to get more support on the basis of victimhood and nationalism.

Despite all these efforts by the AKP, almost all the straw polls show that the NO vote is in the lead. However, many people justifiably think that Erdoğan will prevent a NO victory and that is why they think voting is pointless, a factor which can play into Erdoğan’s hands.

Each and every NO vote will be a severe blow to Erdoğan and his attempts to create a one-man regime. The NO votes will express the voices not only against the unprecedented attacks on basic democratic rights and against an all-powerful president, but also against below the poverty line minimum wages and pensions, against long queues in hospitals, against unemployment and inflation, against the piling up of credit debts. In other words, a NO vote is a vote against dictatorship and an end to oppression and exploitation.

For the last two years, Turkey has come under a cloud of oppression, fear, terror and chaos. A country where newspapers and publishing houses are being shut down; journalists, academicians, public servants are dismissed and arrested, and strikes banned. Turkey has become an edgy country where everybody asks the same question: “Who is next?”

Each and every NO vote on April 16 referendum will prepare the ground for the common resistance needed against the unbearable, inhuman conditions we live under. Different parts of society are organizing NO campaigns, with all the means they have at their disposal.

A victory for the NO on April 16 would give a formidable springboard to the revival of the struggle against the pro-capitalist and authoritarian rule of Erdogan. But a victory for the YES vote, while a significant setback, would not settle things one way or another for any length of time, as this would not see the disappearance of mass anger in society nor the economic crisis facing Turkish capitalism.

Whatever the outcome on April 16, this mass frustration and anger need to find its outlet in the building of a united, workers’ movement, with a bold socialist program, including defending the Kurdish people’s right to self-determination, and the taking over of the commanding sectors of the economy into democratic public ownership and management, for the benefit of the working class and poor.