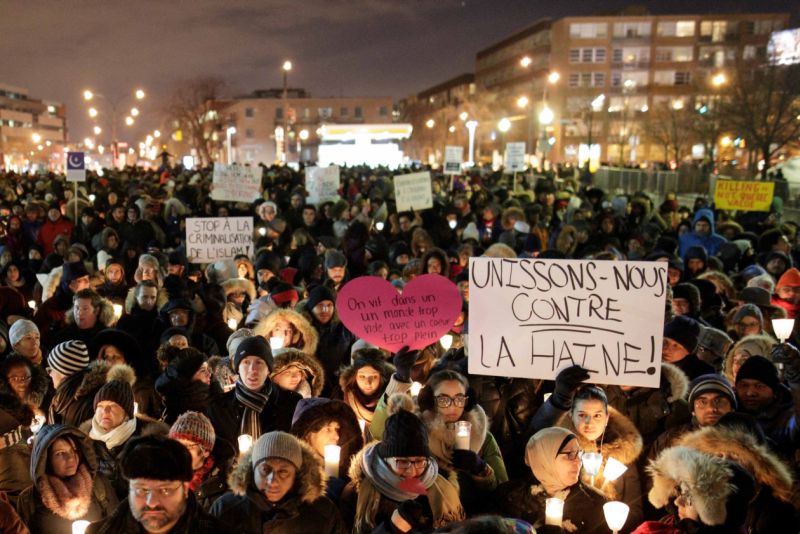 The terrorist attack on a mosque in Québec City is a tragedy that shocked and outraged most Canadians. There has been a huge response of solidarity across the country, with vigils and rallies. Six men were killed at prayer and 19 others were injured, some seriously. The murdered were all fathers, well known in the community for helping others and include a professor, a shopkeeper, and skilled workers. Socialist Alternative (CWI, Canada) and Alternative Socialiste (CWI, Québec) share in the condolences and solidarity.

Most Canadians are appalled, but not all. The whipping up of attacks on Muslims has grown recently and got a boost with Trump’s election and his recent executive orders to build a wall with Mexico and exclude Muslims. There are also politicians in Canada who have tried to use attacks on Muslims to gain support.

In the last weeks of the Federal election in 2015, the Conservative Party candidate, Stephen Harper tried to regain support in Quebec by calling for banning the niqab for public employees.  It did him little good as the Tory’s share of the vote was almost exactly the same in 2015 as 2011.

The Parti Quebecois’s (PQ) Charter of Values (introduced in 2013) contained coded anti-Muslim politics. It banned pubic employees from wearing “overt” religious symbols such as Muslim headscarves, Sikh turbans, or Jewish kippas. However, Catholic symbols such as the many streets named after saints, the large cross atop Mount Royal and the crucifix hanging in the Quebec National Assembly would all be fine. However, the Charter was one of the reasons the PQ was defeated in 2014, as most urban and young people rejected its implicit prejudices.

Kellie Leitch, in her present run for leader of the Conservative party, has used the same coded language for prejudice talking of screening all visitors, refugees, and immigrants for “Canadian Values.” And you can be sure she does not mean support for public health. She has also publicly applauded Trump’s election in the U.S.

One thing many mainstream politicians don’t lack is hypocrisy. Leitch tweeted of the attack “heartbreaking news out of Québec City tonight. My thoughts and prayers are with the victims.” Trump offered “condolences following the tragic shooting.”

While these politicians clearly did not direct the accused attacker, they stoked Muslim hate. Evidently, Alexandre Bissonnette, charged with six counts of first-degree murder is a fan of Donald Trump and French far right leader Marine Le Pen, and had a reputation for misogyny and racism. He is a Canadian-born white who appears to be socially inept and his views were fed by the legitimizing of prejudice and hate by political leaders.

These prejudiced leaders feed the flames of hate and then decry the outcome.

We can put no trust in the politicians who make pious statements of condolences but then feed fear and economic insecurity. The massive response against the attack shows that a campaign of solidarity against racism and terrorism can be built, with workers taking a leading role in the building this movement.

Read the original statement in French.