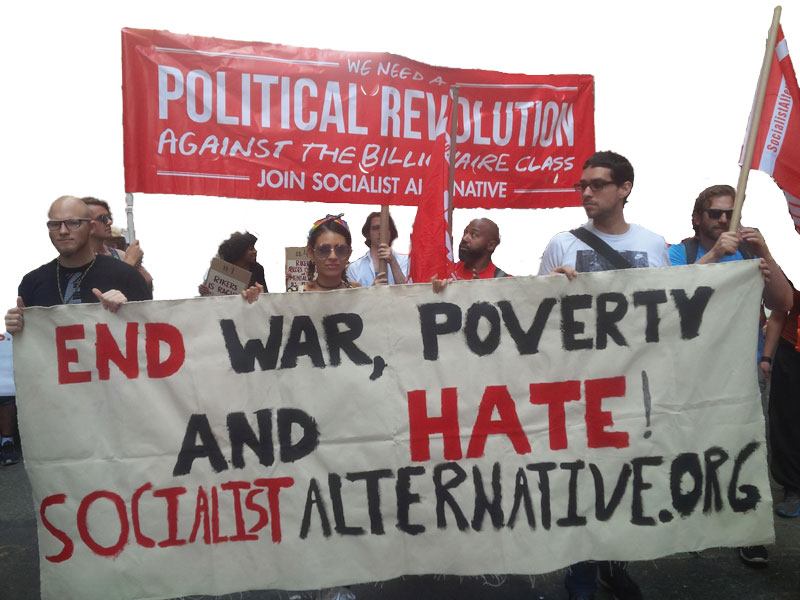 Seemingly out of nowhere, over the last few years, socialist ideas swept in from the ignored margins of American politics to compete for center stage. The 2008 economic crisis opened a fresh debate on socialism and capitalism, but it was the electrifying presidential campaign of self-described democratic socialist Bernie Sanders that brought socialism back into the mainstream debate.

But what does socialism mean? Merriam-Webster reported “socialism” was their most searched word in 2015, spiking 169% and becoming the dictionary’s 7th most searched word ever. This points to the rising interest as well as widespread confusion surrounding socialist ideas.

The defenders of capitalism attempt to paint socialism as a utopian schema dreamed up by self-appointed intellectuals who would dogmatically impose their grey, lifeless system on the unwilling masses. For many who associate socialism with the Stalinist legacy or the sellout social democratic parties in Europe, there is an understandable desire to abandon the old ideas and start fresh.

Yet any serious look at the history of working people’s struggles reveals a fundamentally different story.

Workers and oppressed people worldwide have repeatedly fought back to improve their conditions and liberate themselves. Everywhere, a central feature of the class struggle is a battle of ideas. The ruling minority attempt to shroud their exploitation through lies and distractions. Meanwhile, the exploited majority attempt to clear the fog and discover the real mechanics of the system which oppresses them, and what an alternative system might look like.

Arising organically from the experience of the class struggle, the genuine ideas of Marxism initially worked out nearly 170 years ago are a living body of ideas continuously developed by successive generations of class fighters. The history of capitalism reveals how social movements repeatedly face similar challenges and similar debates, and how the most far-thinking fighters draw similar conclusions. Marxist theory and practice flows from careful study of these international and historical experiences and from rigorous debates within these living struggles.
Marxism is an attempt to scientifically trace out the actual dynamics of global capitalism and the class struggle. Only through a lucid understanding of social processes, cleared of the fog of capitalist propaganda, can workers and the oppressed map out a strategy and tactics to defeat big business and transform society.

Genuine socialist theory is therefore a sort of best practices guide to winning short-term struggles, a transitional method of linking today’s movements to a broader global strategy to end capitalism, and a vision of a future society based on the experience of workers self-organization in struggle.

The 2016 elections show more clearly than ever that democracy under capitalism is completely rigged against working people.Wall Street and the big corporations finance both parties, so whether the Democrats or Republicans win, the 99% loses. Despite the wave of anti-establishment anger destabilizing both parties, the resulting “choice” between Clinton and Trump – the two most hated candidates in modern history – underscores that unless working people build our own political party, corporate and right-wing forces will continue to dominate.

Yet corporate domination of our political system is just an extension of capitalist control over our economy. Consider the awesome power concentrated in the hands of the few owners of the big corporations. Five companies dominate the U.S. media industry. A handful of corporations like Google, Apple, and Facebook control the information age industries. The energy industry is monopolized by several fossil fuel profiteers who effectively prevent a shift to a renewable energy economy and better mass transit.

The overriding goal of these corporations is not to produce quality news programs, wider information access, or a sustainable energy policy; their goal is to maximize profits. Achieving this requires a relentless drive to cut costs and increase market share at the expense of all other considerations.

Apologists for capitalism reduce the problem of corporate political domination of society to corrupt or greedy political leaders, or to the lack of sufficient regulations. Social democrats like Bernie Sanders argue that it is possible for ordinary people to take control of government and use it to tame and control the capitalist class through regulation, higher taxation, and more generous social programs.

We welcome every positive reform under capitalism and argue for a mass party of the 99% which, alongside a fighting labor movement, could win significant gains for working people. But as long as the capitalist class remains economically dominant such reforms will never be permanent and will be undermined at every opportunity. Furthermore, there is no way to permanently end the “boom and bust” cycle of capitalism and the vicious day to day exploitation of workers without taking power out of capitalist hands both here and internationally.

Socialists argue that only by placing the big banks and corporations into public ownership, under workers democratic control, can a genuine democracy of, by, and for the 99% be achieved.

Instead of elections every two or four years determining which capitalist party runs things, a socialist government would be composed of elected representatives from workplace, community, and student councils. Every workplace, university, and institution would be run through elected workplace and community councils. Representatives could be immediately recalled and would be paid no more than those they represent.

In this way, the profit motive would no longer dominate society and the warped priorities of the market could be replaced with a global economic plan. All political and economic decisions could be made democratically, with social and environmental priorities determining investments, wages and laws.

After the onset of the global economic crisis, capitalist politicians everywhere demanded working people tighten their belts while they continued to rake in record profits. As Bernie Sanders continually pointed out, virtually all the gains of the post-2008 economic recovery have gone to the top 1% while wages and conditions for most workers have continued to worsen.

We face a distribution crisis, not a scarcity crisis. There are more than enough resources to ensure a decent life for all, but a tiny elite hoard the wealth or waste it in nonproductive speculative investments. As the leaked Panama Papers revealed, big business and the wealthy elite hide trillions in tax havens, looting national treasuries of billions in lost revenue.

Socialists argue for taking the top 500 corporations and financial institutions into public ownership and using their wealth to fund a massive green jobs program. On this basis, all those unemployed and underemployed could be offered full time jobs at living wages on projects addressing vital social needs.

Tens of thousands of new teachers could be hired and crumbling schools rebuilt. Free, quality health care could be extended to everyone, unhindered by the rapacious insurance companies. Huge investments in clean energy infrastructure, including the dramatic expansion of mass transit, could accompany the phase-out of fossil fuel reliance. Free, quality child care, elder care, and programs serving the disabled could be established.

On this basis, poverty could be rapidly wiped out, alongside the crime and social problems caused by widespread economic desperation.

Racism, sexism, homophobia, and other forms of oppression, cannot be understood – or fought – in isolation from capitalism as a whole. Despite this, unfortunately, most movement leaders fail to link anti-oppression struggles to a unifying socialist vision.

As Malcolm X argued, “You can’t have capitalism without racism.” If the multiracial American working class became conscious of its collective interests, and potential power, the rule of the 1% could be rapidly broken up.

That’s why big business continues to fund right-wing Republicans, if it furthers their divide-and-conquer agenda. That’s also why the corporate media amplifies the voices of bigots and perpetuates racial and gender stereotypes.

A socialist transformation of society wouldn’t automatically erase deeply ingrained prejudices, but it would remove the most significant root cause. With workplaces under public ownership and democratic control, there would be no capitalist class with an interest in dividing workers from one another.

A socialist system would invest in communities of color traditionally starved of quality schools, good jobs, decent housing, and social services. Homophobic laws would be removed. Women could be guaranteed equal pay for equal work, free quality child care, paid maternity leave, and other necessities. The mass media, run democratically under worker/community control, could be transformed into a powerful tool for undermining prejudice.

Capitalism now literally threatens our existence as a species. The scientific community is unanimous that unless we drastically reduce consumption of fossil fuels in the next few years, catastrophic climate change is inevitable. Already the impact is being felt. Extreme weather is on the rise. Droughts are causing crop failures across the world, driving up food prices, and pushing millions more into hunger.

Yet both political parties are promoting more drilling for oil, more fracking, and more coal usage. No wonder, since capitalist politicians from both parties rely on the support of the huge energy corporations for their political careers. On a global scale, the cooperation needed to address the crisis is blocked by capitalist competition between nations. Instead, endless wars for control over global energy reserves have destroyed the Middle East and created the biggest refugee crisis in human history.

Numerous studies show it is technically possible for a combination of wind, solar, tidal, and hydro power to meet world energy needs. With a democratically planned socialist economy, and the profit motive removed from global investment decisions, this transition could be achieved.

Capitalism is plunging the globe into an ever deepening spiral of inequality, environmental destruction, and violent conflict. If working people fail to build a powerful left, socialist movement to offer a way out, right-wing forces will tap into the anger and desperation to fill the political vacuum. On the other hand, with openness to socialist ideas rapidly rising, the opportunities to build a mass movement capable of fundamentally transforming society is rapidly unfolding. Let’s seize the time!