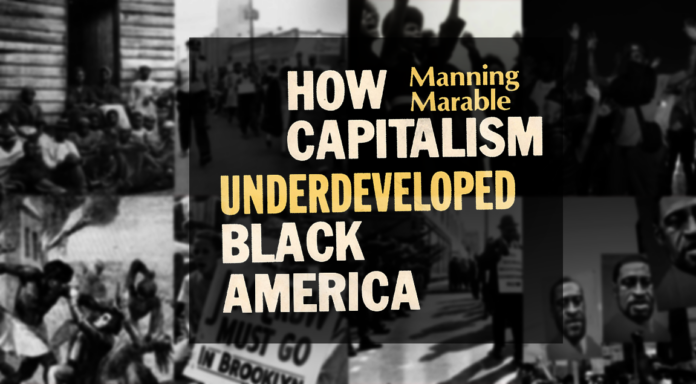 In his 1983 book, How Capitalism Underdeveloped Black America, Manning Marable wrote of the inexorable ties between American capitalist development and the brutal exploitation of Black people.

”Blacks have never been equal partners in the American Social Contract,” Marable wrote, “because the system exists not to develop, but to under-develop Black people.”

This systemic underdevelopment and super-exploitation has been expressed in many forms throughout American history, from the reliance upon the slave trade to build the foundations of the national economy, to the ways in which Black people continued to be exploited for their labor power right up until present day.

New Year’s Day 2023 will represent 150 years since President Abraham Lincoln signed the Emancipation Proclamation – the executive order that legally and permanently freed more than 3.5 million Black slaves in the United States. In light of that, we should examine where the fight for Black liberation stands today.

Crisis of the Black Working Class

Published near the start of the Reagan presidency, Marable’s book connected the threads from the beginnings of slavery all the way through to the rising attacks on the Black working class during the early 1980s. Along the way, he noted the specific ways in which Black American society was shaped by capitalist development over 150 years.

He underscored the “triple oppression” faced by Black women – race, class, and sex – in a patriarchal society. He criticized the Black misleadership class in politics, the church, and academia, who had failed to look beyond bourgeois democracy and capitalist solutions for the Black working class. He also enumerated the many ways in which America’s political system was inherently racist.

Racist housing policy restricted the Black working class’s ability to own a home. Periodic capitalist crises led to recessions and rightward shifts in federal policy, both of which disproportionately affect Black Americans. Unequal pay meant Black people were paid less for work than white peers with the same credentials. Decades of outright terrorism held down Black development, including the rise of the KKK in the early 20th century, the state-supported repression of civil rights activists in the 1960s, and the racist police violence that continues to  the present day.

Brutal anti-labor practices led to the loss of millions of jobs for Black Americans, throwing many into a state of chronic unemployment. A significant portion of the Black working class saw no way out of their financial plight, and turned to jobs in the illegal, informal economy to get by.

The racist prison system stepped in to fill the void left by slavery by warehousing surplus Black labor – creating a segment of the Black working class people that capitalism refuses to even provide the opportunity to be exploited by the normal capitalist employment system. This served in conjunction with the other racist divide and rule policies and a broader attack on the labor movement that particularly affected Black workers to fragment and destabilize Black communities as the neoliberal era unfolded under Reagan and then Clinton.   It was a a counterrevolutionary reaction by the establishment to the Black Freedom Struggle that made massive gains from the 1950s to the 1970s with the goal of preventing any further revolt in the future.

The price for this unequal system continues to be paid disproportionately by the Black community, including the impact of new crises like COVID-19 and our current period of inflation. Both political parties have played a part in perpetuating this system, slowing down progress when profits demanded it, or making reluctant concessions  when pressures from below threatened the stability of the system as a whole.

Racism is in American Capitalism’s DNA

The exploitation of Black people was codified into law from the very start: from the Constitutional clause that declared Black people as three-fifths of a person for the purposes of determining Congressional representation, to federal legislation like the Missouri Compromise which ensured the balance of free and slave states with the goal of protecting the interests of the slave owning aristocracy.

The end of slavery, for example, could be traced from rising capitalist conflict in the middle of the 19th century: Southern states were running short on arable land as well as cheap labor – due to the increased costs of slaves – to sustain the cotton industry.

Using their dominance of the American political system through the Democratic Party, the plantation owners defied the Missouri Compromise in an attempt to grab more land out west for cotton production. This stood at odds with the interests of Northern capitalists, and this conflict between two modes of production – Northern industry and finance vs the Southern plantation system – provided one of the primary bases for the Civil War.

In general the smashing of chattel slavery and Reconstruction, which was only possible because of the decisive role of Black soldiers in the Union army, opened up huge possibilities for the advancement of the Black population. But the Northern capitalists chose to cut this possibility off and made a rotten deal with the former slaveowners that opened up a new form of subjugation of Black people under Jim Crow.

During Reconstruction, some freedmen who as slaves had become skilled tradesman in areas such as shoemaking, carpentry, and tailoring suddenly had the opportunity to become businessmen. These early Black capitalists – a burgeoning Black petty bourgeoisie – mainly sold to white customers. But, once again, their independence was tied to the shifting whims of American capitalism.

As Marable writes, Black business owners who were former slaves were hamstrung by lower rates of literacy, a lack of familiarity with business practices like marketing and bookkeeping, racist laws like annual business licensing fees that their white counterparts did not have to pay, and laws against self-employement that threw them into jail for vagrancy. They also simply had fewer resources than white business owners to withstand the periodic crises that reliably occur under capitalism, meaning Black businesses were more likely to fail during economic downturns.

The introduction of Jim Crow laws further hindered Black development, and especially the advancement of this Black business class. Cut off from selling to white clientele, many of these businesses failed, and those entrepreneurs who survived became increasingly separatist as a strategy to nurture and preserve a Black consumer class to sell to.

Ironically, the Civil Rights Movement’s push for desegregation in the middle part of the 20th century later dealt a significant blow to Black capitalism. Recognizing the significant buying power of the Black consumer class, white capitalists were able to come in and start extracting wealth from Black communities. This direct competition cut into the profits of Black business owners, who again were less resilient toward this change. Black businesses in this period often had to pay higher insurance premiums, charge higher prices due to smaller volumes of commodities, and had to contend with racist policies including redlining, which led to higher interest rates.

As long as Black oppression has existed in the U.S., so too has the struggle for genuine liberation. From the slave rebellions in the 18th and 19th centuries, to the struggle to build an integrated industrial labor movement in the 30s and 40s, to the Civil Rights movement of the 50s and 60s, to the Black Lives Matter struggle of recent years, it is guaranteed that as long as capitalism continues, so too will the fight for Black freedom. Many of these struggles won enormous victories including smashing the slave system and later Jim Crow and building unions that raised the living standard of a large section of the Black population.

As Marable wrote, the U.S. capitalist state will never be convinced to reform through moral persuasion. That’s why socialists must fight for a new society, and set out to build a multiracial, multi-gendered mass movement independent of both parties of capitalism to carry out the fight: “Fundamental change will require a massive democratic resistance movement largely from below and anchored in the working class and among oppressed minority groups.” This is the type of movement we must build.