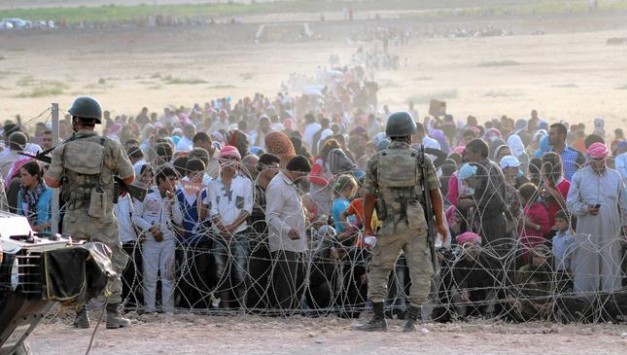 On August 27, the world watched in horror as an abandoned truck was found on the outskirts of Vienna carrying the dead bodies of 71 refugees decomposing in the summer heat. They were among millions who are fleeing the devastation of war, repression, and sectarian conflict in Syria, Iraq, and Afghanistan. This comes on the heels of the sinking, four months prior, of a ship off the coast of Lampedusa, Italy carrying over 800 refugees, primarily from sub-Saharan Africa.

These tragedies have brought about an outpouring of anger and solidarity throughout Europe. Shortly after the discovery of the abandoned truck, 20,000 marched in Vienna demanding that refugees be given the right to asylum. Similar demonstrations have taken place across Europe and, in response to the growing anger, a number of European governments have been forced to take positive measures to assist the refugees and break down previous immigration barriers.

The European leaders’ newfound concern for the plight of refugees reeks of hypocrisy. Shortly before the Lampedusa shipwreck, the European Union shut down its Mare Nostrum rescue mission in the Mediterranean and replaced it with the Triton operation, centered around border security rather than search and rescue. And European capitalism is notorious for whipping up xenophobia and anti-migrant sentiment. But, thanks to the growing popular anger at the treatment of refugees, the European leaders had to at least appear welcoming.

Not everyone has been so welcoming. Amnesty International reports that the U.S.’s oil-rich gulf allies Qatar, United Arab Emirates, Saudi Arabia, Kuwait, and Bahrain have offered zero resettlement places to Syrian refugees. Meanwhile, the state of Israel has refused to admit Syrian refugees, with Prime Minister Benjamin Netanyahu declaring, “We will not allow Israel to be submerged by a wave of illegal migrants and terrorist activists.”

Created by Capitalism and Imperialism

The current refugee crisis is Europe’s biggest since the Second World War. But the refugees are fleeing even bigger crises in the Middle East, Central Asia, and the horn of Africa. It is the ruling classes of the imperialist countries, and especially the U.S., who bear major responsibility for this crisis. Historically, British and French imperialism employed divide-and-rule techniques to secure their colonial rule. More recently, U.S. imperialism’s “War on Terror,” begun under Bush and continued under Obama, has been the main destabilizing force in the region, enflaming terror rather than combatting it.

Apologists of imperialism may talk of spreading democracy throughout the world. But the real-life consequences of imperialist intervention have had the opposite effect. The bombing and occupation of Afghanistan and Iraq served to prop up various dictators who served the interests of U.S. capitalism. This created the conditions that allowed groups like ISIS and al-Qaeda to thrive. The resulting chaos has spilled out into Syria, Yemen, Pakistan, and even as far as Nigeria.

The workers’ movement in Europe needs to take a lead in demanding that the refugees are granted asylum, helping organize the relief, and encouraging the refugees themselves to get organized. There also needs to be a concrete program of what can be done to help settle the refugees and, most importantly, where the resources will come from. The demands need to link together the needs of the local population and those of the refugees. For example, there is a need for housing for refugees and also a housing crisis facing the host population. Unless this is addressed, there is a danger that this mass exodus will provoke a counter-reaction as right–wing and far-right forces try to exploit the situation, particularly by claiming that the refugees are taking resources away from the host population.

The crises of capitalism and imperialism can be challenged. In the revolutions that began in 2011 in North Africa and the Middle East, we saw a glimpse of how action by working people can bring change. And we saw it in the working-class struggles in Southern Europe at the time. Such movements, armed with a socialist program, can put an end to the sectarian divisions, wars, repression, and poverty, opening the road to a world free from capitalist exploitation where the use of the globe’s resources is democratically planned in the interests of the masses of humanity and not the ruling classes.