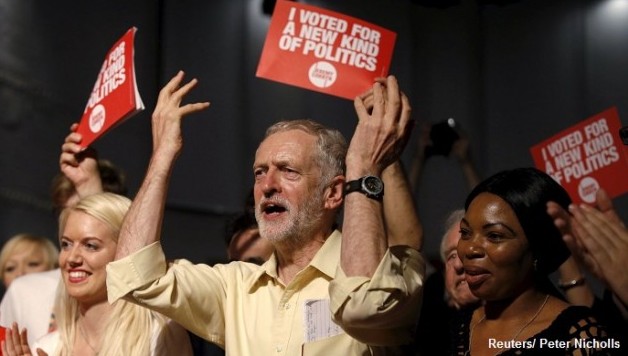 The British Labour Party was formed at the beginning of the 20th century by socialists and trade unions as a workers’ party, but in the 1990s a pro-capitalist leadership around Tony Blair moved it significantly to the right and systematically removed socialist ideas and working-class influence. Socialists inside the Labour Party were reduced to a tiny group, with just nine Labour Members of Parliament out of 230.

However, the Blairite apparatus made a fatal mistake in reworking the procedures for the party’s leadership election, allowing anyone to register as a supporter and vote if they paid £3 ($5). They also allowed socialist Member of Parliament (MP) Jeremy Corbyn to run. He stood on a platform against austerity and inequality and for policies such as public ownership of the rail and energy companies, a £10 an hour minimum wage, free education, building public housing, and repeal of the anti-union laws. Hundreds of thousands of anti-austerity supporters registered to vote.

This is an extract from the editorial of The Socialist, paper of the Socialist Party of England and Wales, with which Socialist Alternative is in political solidarity.

For decades, the Palace of Westminster [the building housing Parliament] has been almost completely devoid of serious disagreements. All three of the major establishment parties – the Tories, Labour, and the Lib-Dems – have agreed on the central questions such as the supremacy of the “free” market, support for privatization and austerity, and the need to undermine workers’ rights.

Nine members of the Socialist Campaign Group of MPs, isolated on Labour’s weak left wing, were very often the lone opponents of the endless attacks on the rights of working-class people. Despite their best efforts, they resembled prisoners occasionally smuggling out a note to the population outside.

But now, the world has been turned upside down. The Blairites – who have dominated Labour for two decades – are now the 4.5%: the percentage gained by the most right-wing candidate, Liz Kendall. With the overwhelming vote electing Jeremy Corbyn as leader of the Labour Party, the pro-austerity consensus has been smashed. The hopes of millions who want to see a society for the 99%, not the 1%, have been raised.

The Socialist Party has long argued that the potential exists in Britain for a new mass workers’ party. We have argued that – if it could find an outlet – the anger,  voiceless until now, could very quickly become a powerful force. In Scotland, it found an outlet in the independence referendum and then in the Scottish National Party landslide in the May general election. In England and Wales, it has now found an unexpected channel in Jeremy Corbyn’s campaign for Labour leader. No one, least of all Jeremy Corbyn, expected this outcome.

The possibility of building a powerful mass party can be seen from the events of the last few days. We considered it more likely to come into being from forces outside of the Labour Party – as has been the trend in most countries – given the Labour Party’s transformation into a capitalist party. However, we have no fetish about by what route the crisis of working-class political representation would be solved and have never excluded the possibility of Labour swinging left. As long ago as 2002, we argued that, “under the impact of great historic shocks – a serious economic crisis, mass social upheaval – the ex-social-democratic parties could move dramatically toward the left.”

However, the reality is that the Corbyn surge has mainly not come from within the Labour Party but from outside it: new members and registered supporters who were attracted by the hope of something different. This is a new party in the process of formation, and it will face relentless attack from the “old” pro-capitalist New Labour.

The question is how best to consolidate and build on Corbyn’s success. Winning the leadership of Labour is a very long way from transforming the party as a whole. In attempting to do so, Corbyn and his supporters will face the determined opposition of not just the right-wing Labour MPs and Labour machine, but also of the capitalist class. There will now be a huge campaign to try and extinguish the anti-austerity flame that has been lit with the election of Jeremy Corbyn as leader.

It is clear that the Labour right will attempt to imprison and undermine Corbyn, with the aim of removing him as soon as possible. To win requires building on the popular movement against austerity that found a voice in his election campaign. Unity has to be built around clear anti-austerity policies.

The appointments to Corbyn’s leadership team are a mixed bag. Alongside his campaign manager, John McDonnell, as Shadow Chancellor [the treasury spokesperson], the majority are Blairites. Many on the right of the party have refused to serve in the Shadow Cabinet, but there is a division of labor, with those inside the tent trying to imprison Jeremy Corbyn and others trying to sabotage from the back benches.

To defeat the onslaught, Jeremy Corbyn will face going beyond the constraints of the right-wing-dominated Labour Party machine or the niceties of Labour’s constitution as recast by Blair.

As a starting point, we would urgently encourage Jeremy Corbyn to organize a conference of all those who have supported him, plus the many trade unions which support a fighting anti-austerity program. The Socialist Party would participate in such a conference and would encourage all other anti-austerity campaigners to do the same.

A campaign needs to be launched to recreate Labour’s democratic structures, including the reselection of MPs: the democratic right of a party’s members to replace an MP who has voted against the party’s policies. That should be uncontroversial. However, it is not a surprise that it upsets Labour MPs who have voted for welfare cuts, austerity, and war.

The Labour Party was founded by the trade unions as part of a struggle by the organized working class to create its own political voice. Nonetheless, from the beginning Labour was a capitalist workers’ party – with a working-class base but a pro-capitalist leadership. Yet the working class was able to influence it via the party’s democratic structures. An essential part of the transformation of the Labour Party into a capitalist party over recent decades was the removal of the trade union vote within the party. This should be restored and, at the same time, a Corbyn-led Labour Party needs to reach out to all those opposing austerity, including community campaigns and other political parties. A new constitution could be based on the original, federal constitution of the Labour Party.

Jeremy Corbyn has, up until now, rightly taken a flexible and welcoming approach to the movement that has sprung up around him, but any insistence by his campaign that the only way to support Jeremy Corbyn is to sign up as a Labour Party member under the existing constitution would be a mistake, which possibly could act to repel potential supporters.

At local level, anti-austerity alliances will be needed to bring together all those who want to fight the cuts. This is urgent. Local council services have already been cut by 39% and will face further catastrophic cuts next spring. Jeremy Corbyn has, rightly, made the call for councils to stand together and refuse to implement government cuts. However, some of Corbyn’s supporters are now emphasizing the importance of his being seen to be “moderate” and “reasonable,” arguing, therefore, that Labour councils should continue to implement Tory cuts. This would be a terrible mistake. A Corbyn-led Labour Party will be popular if it is prepared to oppose austerity. But it is likely that the majority of Labour councils will continue to implement government cuts.

Where this happens they should be opposed in elections by anti-austerity activists. This will strengthen the hand of Jeremy Corbyn and the anti-austerity movement as a whole.

However, it is also necessary to go beyond the very good demands Jeremy Corbyn puts forward. He merely calls for “meaningful regulation of the banking sector” rather than for nationalization of the banks under democratic control, for example.

The experience of Syriza in Greece shows that defeating austerity requires a determined struggle with a clear goal. Endless austerity and growing inequality are not an accident; they flow from the needs of capitalism, where profits for a few have been restored at the expense of the majority.

The most important single consequence of Jeremy Corbyn’s victory is that questions like, how can inequality be ended and austerity be defeated and, above all, what is socialism and how can it be achieved are now being discussed widely. A new generation is hearing about socialist ideas for the first time.