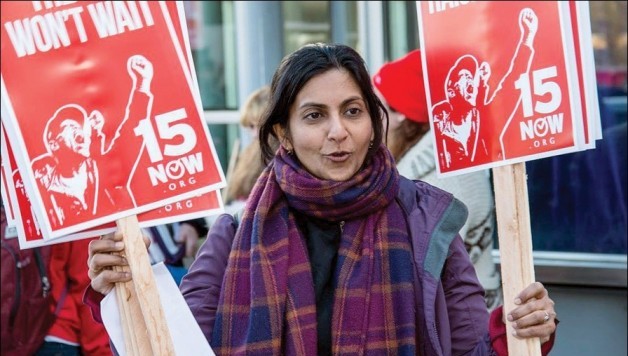 This article from the New York Times discussing third parties hits the nail on the head.

“Again and again, third parties have pushed new ideas into the mainstream, like women’s suffrage, unemployment compensation and the direct election of senators. It’s no coincidence that the newest third-party politician elected to office, the Seattle city councilor Kshama Sawant of the Socialist Alternative party, rode to victory in 2013 in part by calling for a $15 minimum wage. Now that movement is going mainstream, with a number of cities following suit. Third-party movements in America have helped break political stagnation and enable the country to shift direction at critical times.”

What’s causing “political stagnation” is a political establishment that puts corporate profits over our communities.  We can see this on full display in education.

The Washington State Legislature has handed over billions to Boeing in tax handouts and created 600 corporate tax loopholes, all while shortchanging our children and educators by billions, forcing Seattle teachers to go on strike.

Seattle’s richest 1%, inflamed over the passage of the $15 minimum wage and the leading role Kshama played, and fearful of a similar housing justice movement that could threaten their jaw-dropping profits, are absolutely dedicated to defeating Kshama and any movements of the 99%.  They see unseating Kshama as instrumental in solidifying the City Council as a compliant body to advance corporate interests.

And they are acting on that – corporate donors have given $100,000 so far to our opponent.   We can expect hundreds of thousands of dollars more to be thrown against us.

So, it’s clear the 1% is ready to fight and spend for what they want. The question is – are you?  In 2015 the movement to take on the billionaire class is being built in Seattle.  But you can’t take on the billionaire class from the sidelines, you gotta get on the field.
We’re calling on 200 supporters to donate $20.  We want to raise $4000 to cancel out the max donations from the Chamber of Commerce, HomeStreet Bank, and the Washington State Realtor Association. Can we count on you to donate $20 right now?
© Newspaper WordPress Theme by TagDiv