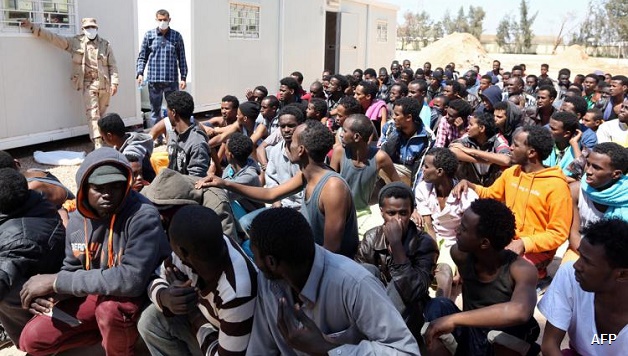 A socialist view on the immigration crisis

Editorial from The Socialist, paper of the Socialist Party (CWI in England & Wales)

Got a spare £1 million you’d like to invest in a company in Britain? In that case the government welcomes you to Britain as a ’high-value migrant’. No need for you to risk your life crossing the Med in a leaky boat, or spend months camped at Calais on starvation rations before hiding in a lorry. No need even to meet the visa guidelines about speaking English.

You can fly in without too many questions being asked – including about how you got your spare million. A history of dictatorship, warmongering, corruption or plain old-fashioned thieving are not necessarily obstacles. If you are a bit flusher again and can spare £10 million you will get automatic indefinite leave to remain after two years.

So for the rich there are very few obstacles to migrating to Britain. It is altogether another story for the majority of those currently fleeing war, dictatorship and conflict in the Middle East and Africa. Most are left dispossessed and hungry within their own countries or in neighbouring ones. A minority – able to scrape together a few more resources – end up in the hands of the people smugglers, risking their lives to cross the Mediterranean.

Last year 219,000 people arrived in Europe by these means. This year the figure is set to be higher, with 137,000 arriving by the end of June. Countless thousands more have died in the attempt. The majority of those risking their lives are refugees fleeing conflict. Of those who arrive first in Greece (about half of the total) more than 85% have come from Syria, Afghanistan, Iraq and Somalia. All of these are countries where Western military intervention has helped to create the nightmare situations from which people are now being forced to run.

Working class people across Europe are shaken and moved by the human tragedy developing on their TV screens. There have been numerous incidents ofworkers in Greece and Italy heroically trying to rescue – and then to care for – the refugees that have arrived on their shores. The Red Cross spokesperson for Southern Italy summed up the response of Italian workers who are giving food, clothing and shelter to the refugees when she said: “The poorer people are the more they give.”

At the same time, with austerity biting and living standards falling, there is an understandable fear among many that it will not be possible to cope with the number of migrants arriving without it having a detrimental effect on wages and public services. This is fuelled by the avalanche of anti-migrant propaganda from the right-wing capitalist media and politicians, who are falsely trying to offload responsibility for endless austerity onto refugees and migrants.

The infamous ’cold cruelty’ of Britain’s ruling elite is clearly revealed with the Tories’ preparedness to let refugees drown in order to try and make political capital. Last year – competing to outdo Ukip by being ’tough’ on immigration – Theresa May actually argued that there should be an end to rescuing migrants drowning in the Mediterranean in order to discourage them from coming!

However, no-one should be under any illusion that the institutions of the European Union have a more humane approach. After the sinking of a Libyan ship in October 2013 in which 366 people died, the Italian government launched a sea rescue operation called Mare Nostrum (Our Sea) which, despite its limits, saved thousands of lives in the fifteen months it was in operation.

But, largely because of claims it was encouraging people to cross the Mediterranean, it was cut and replaced with an EU-run operation which was a third of the size and focused primarily on border control rather than stopping people drowning. The result was the horrific number of deaths in the first part of 2015. In April 2015 1,308 migrants are believed to have drowned compared to 42 in April the previous year (while Mare Nostrum was still operating). Only the outcry this sparked led to an increase in the funding of the EU ’rescue’ operation.

These tragic events show, yet again, that no matter how high the walls are built around ’Fortress Europe’, it will not prevent refugees trying to reach it, even at huge risk to their lives. The reason so many people are crossing by sea in the first place is because of the building of gigantic walls that block the land crossing that previously existed between Turkey and Greece.

So the ending of the Mare Nostrum sea rescue operation did not stop people trying to cross the Med; on the contrary numbers increased, mainly as a consequence of the complete disintegration of Libya. Western intervention into Libya was not motivated by bringing democracy to the country but by defending the interests of imperialism in the region following the mass revolutionary movement that swept the Middle East and North Africa in 2011.

The result is the nightmare that exists in Libya today.Capitalism – including military intervention by British governments – has created such horror for some that they will risk anything to escape.

Yet, while the Tories are considering stepping up Britain’s military intervention in the Middle East, Cameron has used Britain’s EU opt-out clause in order to refuse to take any of the 40,000 of the refugees currently in Greece and Italy which the EU was attempting to ’share out’ across Europe. Once again, Cameron’s argument was that to give shelter to any of the people who have fled across the Mediterranean would be to encourage more to come. He would prefer them to be camped, hungry and desperate, at Calais.

Contrary to the tabloid propaganda, Britain is not the most popular destination for refugees. According to the UN Refugee Agency, far more aim to reach Germany or Sweden. Nonetheless, a minority of those who successfully cross the Mediterranean end up at Calais trying to get into Britain and risking their lives again, using increasingly desperate methods to try and cross the Channel.

It is not true – as the Tories claim – that it is our supposedly ’generous’ benefits that attract workers to Britain. Our benefits are among the lowest in Western Europe. It is the possibility of working in Britain’s unregulated, low-wage labour market which acts as a pull factor, along with language and, in some cases, wanting to be reunited with family members already living in Britain.

What is the solution? We understand the fears of workers in Britain that public services which are already being cut to the bone cannot cope with any more people. However, it is not migration but austerity that is responsible for the strain on our public services.

Under the previous Con-Dem government £80 billion was cut from public spending, coincidentally the same amount as the bankers have received in bonuses since the economic crisis began. If we allow the government to falsely lay the blame for austerity with migrants instead of with the crisis-ridden capitalist system and the bankers and billionaires who benefit from it, then the Tories will succeed in grinding our living conditions into the dirt.

The answer to Britain’s bosses using super-exploited low paid migrant labour is not to build walls so high that migrants can’t get in – the crisis in the Mediterranean in any case shows this doesn’t work – but to fight for a £10 an hour minimum wage for all workers in Britain regardless of their country of origin.

The best traditions of the workers’ movement include international solidarity with workers and the oppressed fighting to improve their living conditions in their own countries. We have more in common with workers fighting low pay and exploitation in Asia and Africa than we do with the bosses of the multinational companies who are exploiting us all.

One aspect of international solidarity is to fight for the right to asylum for those fleeing war, sectarian conflict and dictatorship. This should be combined with supporting the right for families to be reunited and calling for an end to asylum seekers being treated like criminals and locked up in detention centres which are no different to prisons.

It is a lie that there are no resources available. British governments have spent vast sums on going to war. The costs of replacing Trident are estimated at £100 billion over its lifetime. The cost of the wars and occupations of Iraq and Afghanistan has reached £30 billion, £1,000 for every tax payer in Britain.

But while vast sums can be found for war, there are barely pennies for asylum seekers fleeing the consequences of those wars. Control of decisions whether to grant asylum cannot be left in the hands of this callous government. We demand that elected committees of ordinary working people, including representatives of migrants’ organisations, have the right to review asylum cases and grant asylum.

The only way to permanently end the refugee crisis is to fight for a democratic socialist world. On the basis of capitalism, there will always be people forced to flee their country, not by choice, but out of desperation as a result of war, environmental catastrophe and starvation. A socialist society would harness the wealth, science and technique created by capitalism in order to meet the needs of the majority worldwide. Only on that basis would it be possible to have a world where people are free to move if they wish to, but are not forced to do so by the nightmare they face at home.