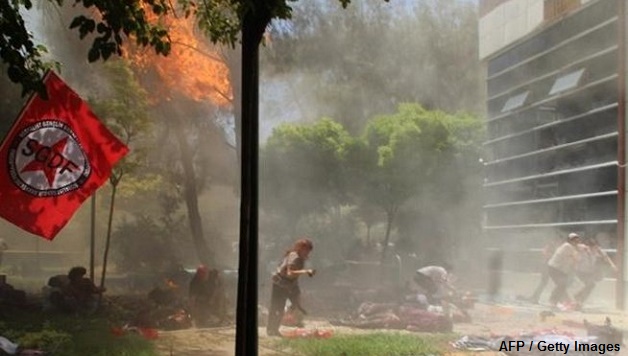 Reposted from socialistworld.net, website of the Committee for a Workers International, with which Socialist Alternative stands in international solidarity.

Today at least 30 activists from the Socialist Federation of Youth Associations (SGDF) were killed in an explosion carried out by an ISIS suicide bomber, in the Southeastern town of Suruç, near the Syrian border. The young activists were gathered at a press conference before travelling to Kobane, eight miles from Suruç, where they planned to help with the reconstruction of the city.

This attack is a consequence of President Erdoğan’s policies of support for the ISIS in Syria. In recent days, Erdoğan has been making plans for military intervention in Syria, and his speech in the aftermath of this latest terrorist attack once again expose his war-mongering intentions. Today’s atrocity clearly shows that the Kurdish and Turkish working people and poor will mainly pay the price for Erdoğan’s tacit support for ISIS groups.

The massacre also proves that ISIS militant, armed with with guns and bombs, are acting and moving freely inside Turkey .

For the first time, ISIS is directly attacking a socialist organisation inside Turkey. This shows the profoundly reactionary nature and anti-working class character of this terrorist group.

We, Sosyalist Alternatif (CWI in Turkey), stand in solidarity with the SGDF, as this attack is an attack on all of us.