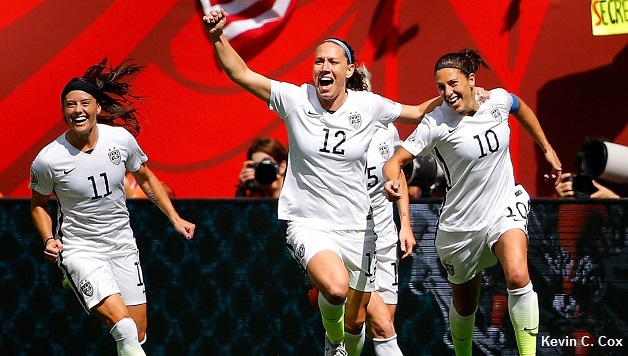 The 2015 FIFA Women’s World Cup ended with a bang as the United States won their third world championship by defeating Japan 5-2. The final  game was a culmination of a month long tournament in which some of the world’s best soccer players were showcased. The organization of this  tournament exposed the deep sexism present within FIFA and much of the soccer community which relegate women’s soccer to second class  status. Despite  this, and a near media blackout, the tournament broke records for attendance and viewership.

A record 1.3 million people  attended this year’s Women’s World Cup which was hosted by Canada. Even more stunning is the record number of people who watched the final game between the US and Japan. Fox Sports reported that an astonishing 25 million people  tuned into the game. That’s more than Game 7 of last year’s World Series , and more than the decisive Game 6 in this year’s NBA Finals. In fact, more Americans  watched this game than any other soccer game ever broadcast!

Yet the tournament was marred by sexism and controversy from the start. It began when Canada made their bid to host and included venues that have artificial turf instead of grass. FIFA accepted the bid despite never having held a tournament that included any surface other than natural grass. Elite players objected and a group led by Abby Wambach of the United States and Marta of Brazil filed a lawsuit against FIFA and Canada Soccer alleging that the decision to allow turf surfaces was discrimination. No other World Cup, or major tournament, has ever been played on turf – before accepting Qatar’s bid for the 2022 Men’s World cup, FIFA demanded Qatar ensure that their stadiums have grass fields.

In typical fashion FIFA simply denied  the discrimination  charge and refused to answer the lawsuit. Faced with a choice of either boycotting the tournament or dropping the lawsuit  the players decided  to drop the lawsuit. Abby Wambach said at the time, “I am hopeful that the players’ willingness  to contest the unequal playing fields, and the tremendous public support we received during the effort, marks the start of even greater activism to ensure fair  treatment when it comes to women’s sports.”

US Soccer, the organization that runs the national team programs, should have stood by its players. If run democratically, it would have demanded only the best facilities and conditions for athletes who devote their lives to the chance to play in the Women’s World Cup. The United States has the capacity and fields to host a world cup on grass, and should have called FIFA on its decision and volunteered to host games on grass or pay to have grass put down in Canadian stadiums.

Players suffered further indignities at the Women’s World Cup. In stark contrast to men’s tournaments, teams that played against each other were forced to share hotels before and after the games, hurting teams preparation for the next games. This is not an anomaly. When traveling to the 2012 Olympics, the Japanese women’s team flew coach while the men’s team flew first class  on the same flight. The women’s team were the reigning World Cup champions at the time and were favored to win gold at the Olympic Games. The men’s team was neither.

FIFA claims that growing the game of soccer is its primary mission, yet it consciously underfunds the women’s game and actively ignores its growing popularity. FIFA spends an estimated $900 million yearly to develop soccer. Of that only about 15% goes to fund programs to help develop programs designed to grow women’s soccer.

This massive  underfunding comes at a time when women’s soccer is more popular than ever. As noted above, record numbers of people both attended the latest  World Cup tournament  as well  as  watched it on TV.

FIFA is organized around the principal of maximizing profits for their sponsors [see World Cup Corruption Scandal]. Corporate sponsors and FIFA believe that the women’s game generates less revenue.

Using the logic of the profit motive these  arguments can make sense. For those who love the game, these arguments are ridiculous. The fact that a record number of people watched this  year’s Women’s World Cup Final belies the theory that the women’s game is unpopular.  Millions of ordinary Americans would  watch women athletes on a regular basis if the games were offered to them to watch.

Today, more women and girls are playing sports than ever before, yet this has not corresponded to an increase in coverage of women’s sports in sports media. Only around 3% of airtime is dedicated to women’s sports. As this study points out, the media can be a driving force behind the popularity of any sport. It is hard to know when to watch or where to attend a game that is hardly publicized.

The manner in which the games are reported upon have an effect as well. Part of the reason numbers were so large for the World Cup Final was because it was relatively well reported on in the days leading up to the Final and those doing the reporting knew the game of soccer and were genuinely passionate about it. The study points out that when women’s sports are covered at all they are usually  covered by men who merely go through the motions of reporting.

If FIFA were serious  about developing the game it would begin to heavily fund women’s soccer. Nominally a “non-profit,” soccer’s world governing body is massively profitable, making billions of dollars from the game that is beloved by the working class worldwide. FIFA is big business  and like all big businesses in the capitalist system the profit motive is paramount. FIFA has the money to dedicate to advancing women’s soccer but run the game like a business that does not see women’s soccer as profitable.

The heads of FIFA and the national associations that make up FIFA are deliberate in following the logic of capitalist  business. Sepp Blatter, the longtime president of FIFA, was once asked what would make women’s soccer more popular. He famously answered,

“Let the women play in more feminine clothes like they do in volleyball. They could, for example, have tighter shorts. Female players are pretty, if you excuse me for saying so, and they already have some different rules to men – such as playing with a lighter ball. That decision was taken to create a more female aesthetic, so why not do it in fashion?”

In that worldview, the players are responsible for making themselves objects instead of being athletes. It’s a lot cheaper for those making money off the game that way. In contrast, ten years ago, FIFA banned Cameroon’s men’s team from wearing their preferred sleeveless  jerseys.

It does not get better at the national level. Perhaps  the most soccer-mad country on the planet is Brazil. Traditionally women’s soccer has not enjoyed a high level of popularity there. That has changed in recent years, likely due to the beauty, and outright dominance of Marta’s play. But when the head of the Brazilian Football Association was asked why the women’s  game has become more popular he outrageously remarked,

“Now the women are getting more beautiful, putting on make-up. They go in the field in an elegant manner. Women’s football used to copy men’s football. Even the jersey model, it was more masculine. We used to dress the girls as boys, so the  team lacked a spirit of elegance, femininity. Now the shorts are a bit shorter, the hair styles are more done up. It’s not a woman dressed  as a man.”

We cannot rely on FIFA or the national governing bodies to build the women’s game. As Abby Wambach put it, “[speaking out could be] the start of even greater activism to ensure  fair treatment when it comes to women’s sports.” Every player and soccer fan, regardless of gender, should join together and speak out against unequal and unfair practices. We should demand:

These are limited demands but would go far in creating spaces for the women’s game to flourish. Soccer fans realize that any perceived deficiencies in the women’s game compared to the men’s game is not because of lack of skill from the athletes but from inferior facilities, fields, etc. If fans, players, and parents join together, we can build a movement to truly level the playing field!