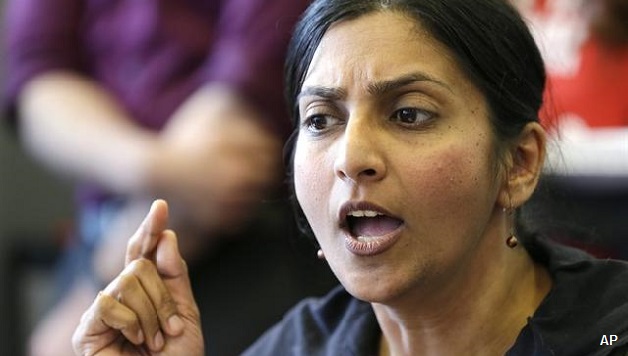 Kshama Sawant’s reelection campaign is the most important battle for independent left politics in the U.S. in 2015. But at the same time the 2016 presidential election is already underway and a major topic of political discussion.

We are ready for a president ending the discrimination against women, closing the gender pay gap, ending poverty wages – which predominantly affect women – implementing a $15 an hour minimum wage.

Unfortunately, Hillary Clinton is not the change we’re waiting for.

Clinton’s gender alone does not mean she will make strides on decisive issues to change the situation for women in the U.S.

Clinton is Wall Street’s candidate to continue the politics of bailing out banks – she voted for it – and hawkish militarism – she cast her ballot for the Iraq war. She’s completely absent on the minimum wage debate and trailing on social issues, as she just came out in support for gay marriage … in April 2015!

Is she the best we can get to avoid another Bush presidency – this time Jeb – or a union-bashing Scott Walker?

No, there are alternatives.

The “Elizabeth Warren wing” of the Democratic Party is not happy with Clinton. New York City Mayor – and former Hillary Clinton campaign manager – de Blasio is hesitant to endorse Hillary. 300,000 have urged Warren to run. Warren has fought to regulate the banks and to tackle student debt. This points in the right direction, but in the view of Socialist Alternative, it does not go far enough.

But even if we put aside our larger differences, the question remains: How can we win even the limited regulations of the banks that Warren is advocating? Wall Street considers Warren’s modest proposals a declaration of war. The power of corporate politics – including PACs, super PACs – and media under big business control – will not be altered without the mobilization and organization of hundreds of thousands of working people.

If Warren were to run for President – which she has said she will not do – and were to win the Democratic primaries, would the corporate-dominated leaders of the Democratic Party be prepared to tolerate such a mass mobilization within its ranks? No. Warren could not be expected to build an independent force of working people and undertake a battle against the big banks and large corporations when she seems to shy away from running against Hillary Clinton at all.

Sanders’ Storm Before the Calm?

Bernie Sanders criticized Hillary Clinton for not being “prepared to take on the billionaire class,” and he is getting ready to run. He could inspire hundreds of thousands. Unfortunately, Sanders also plans to stay within the framework of the Democratic Party. After the primaries, will he just leave the activists he encouraged to get active, telling them to fight for Hillary against Jeb Bush or any other right-winger?

We urge Bernie Sanders to go all-out in the presidential election and run as an independent socialist. His campaign could bring together working people to create the backbone of a party really able to challenge the billionaires.

We need to build an alternative, not just for the presidential elections, but to implement and enforce completely different policies. The domination of the top .1% will not be broken through the channels of their parties. Working people need to organize independently.

If the much-better-positioned Bernie Sanders and Elizabeth Warren do not take on this vital challenge, others like Jill Stein of the Greens will offer an independent voice.

In response to Hillary Clinton’s announcement to run for president,  @OccupyWallStreetNYC tweeted #ReadyForKshama.

Clearly Kshama’s not running for national office, nevertheless her race for a City Council seat in Seattle’s 3rd District this year is of truly national importance. It shows workers, young people, and left activists that we can run our own candidates – independent of corporate cash and the Democratic Party – and win! We can use such hard won positions, to promote organizing from below as Kshama did with winning $15 an hour in Seattle. If you agree, join us!