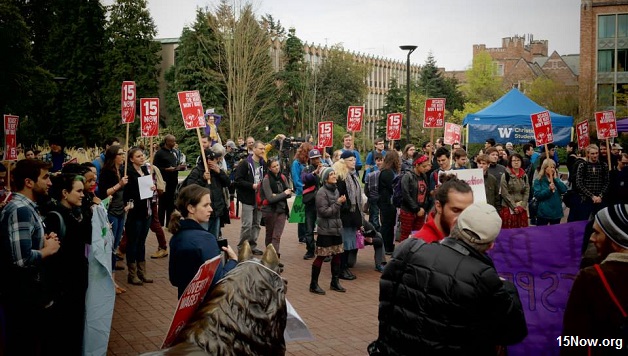 40,000 Seattle workers got a raise on April 1 (from $9.47/hr to $11/hr, $10/hr for employees at small businesses who receive tips and/or health benefits), but the University of Washington administration is claiming exemption from the city’s new minimum wage.

A spokesperson for the UW explained that because the university is a state institution, they are excluded from a municipal wage law. Additionally, they suggested that the cost of bringing low-wage workers up to the new city minimum might be born by students, who are already struggling with out-of-control tuition and housing costs.

However, it was clear on Wednesday that these arguments are not going over well with the students and workers on campus.  Students, employees, and minimum wage activists are building a campaign to unite the campus behind a $15 minimum wage demand.  Campus activists organized a rally and march to express outrage and to demand the university pay all it’s employees – students and workers – a living wage.  At the start of the rally, one student activist produced a list of all UW administrators who earn over $150,000 annually- it was over 15 feet long! The point was well made: the university can easily afford to raise the wages of its lowest paid workers without passing the cost off to students.

The rally then turned into a march, stopping in at several low-wage workplaces on campus to inform workers of the university’s decision to exclude them from the city’s wage increase and to hear testimony from workers on the difficulties of surviving on less than $15 for low-wage workers on and off campus. At the end, Seattle City Councilmember and Socialist Alternative member Kshama Sawant addressed the crowd, remarking that “our victory is incomplete if we don’t take everyone with us!”  She praised the coalition of students and workers for bringing attention to the administration’s decision and encouraged them to keep up the pressure until all UW workers get the raise they deserve.

Earlier the same day, 15 Now was informed that the educational ads they had submitted to Metro on behalf of a coalition of labor unions, Councilmember Sawant, and 15 Now — announcing the minimum wage increase and advertising a hotline workers can call if they do not receive it — was deemed unacceptable by Metro due to the inclusion of Councilmember Sawant’s name (included as a sponsor of the ad along with 15 Now and labor unions). Metro considered this to be advertizing for Sawant’s reelection campaign, which is against their policy. The coalition re-submitted the ad without Sawant’s name, but Metro’s decision delayed the outreach campaign for at least a week.

Nonetheless, Metro’s decision allowed wage activists an opportunity to highlight the need for more outreach about the minimum wage increase to protect against wage theft, which is already known to be an epidemic. A press conference was held on April 2 where 15 Now Seattle Organizing Director Jess Spear, Councilmember Sawant, and representatives of the Boeing machinists union (IAM Local 751) and hospitality workers union (Unite HERE Local 8) spoke to media about the inadequacy of the city’s outreach and enforcement efforts, and the urgent need to combat wage theft as the new minimum wage takes effect. Stefan Moritz of Unite HERE local 8 discussed the fight in SeaTac over wage theft as an example of how passing the law isn’t enough, it must be enforced.

The group then marched to several low-wage workplaces in downtown Seattle to talk to workers about the raise they should be getting in their next paycheck. Unsurprisingly, most workers were excited to discuss the increase, with the general sentiment being “it’s about time!”

Over the coming weeks, 15 Now and labor unions will continue reaching out to low-wage workers in Seattle to ensure they know their rights.  On April 15, 15 Now will join with 60,000 workers in over 200 cities to demand $15 and a union.  The best way to defend our victory in Seattle is to spread it across the country.  Join us on April 15th and make 2015 the year of the $15 minimum wage!