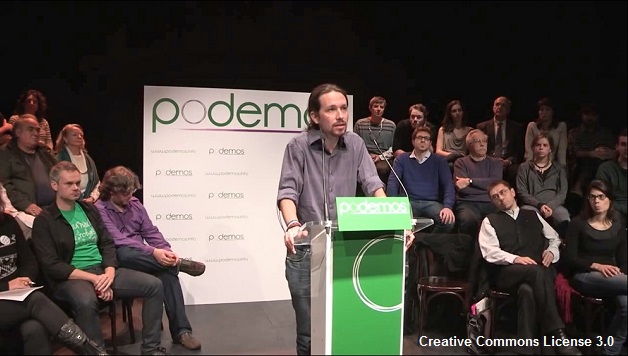 Originally published in The Socialist and socialistparty.org.uk

The election of a Syriza-led government in Greece has encouraged anti-austerity left forces throughout crisis-ravaged Europe and beyond. Nowhere is this more the case than in Spain, where a force widely seen as the ‘Spanish Syriza’, Podemos, is going from strength to strength.

Opinion polls repeatedly put Podemos in first or second place with over 20% support, threatening the survival of the Spanish two-party system. Over 100,000 people filled the streets of Madrid in Podemos’ ‘march for change’ on 31 January. In what will be a year of many elections in the Spanish state, it will certainly be a force to be reckoned with.

Podemos plans that these elections will see its vote inexorably rise, to the point of taking power. While the possibility of an overall majority, at least at this stage, seems very slim, Spain’s two main capitalist parties — conservative PP and ex-social democrat PSOE – could be forced into a ‘grand coalition’ to put a brake on Podemos’ advance. Such a move would only accelerate the death spiral of these two parties, especially PSOE.

In a similar way to Syriza, Podemos has been identified in the minds of millions as a potential tool to end Spain’s austerity nightmare and reclaim a dignified life, following six years of degradation. But can it deliver?

Podemos featured heavily in the closing rally of Syriza’s electoral campaign, with its leader Pablo Iglesias joining Alexis Tsipras in giving the final keynote speech to chants of “Syriza, Podemos, Venceremos” (‘We will win’ in Spanish). However, while Syriza arose as an alliance of left groups, Podemos emerged as a new movement, separate from the traditional left parties.

In many ways Podemos’ success is a product of the failure of the traditional organisations of the left and the workers’ movement. The leaderships of these organisations – especially the United Left (IU) and the main trade unions – failed to recognise that the crisis had ushered in a new period of intense class struggle and radical change. They continued with the age-old failed policies of collaboration and deals with the system and the bosses’ parties.

So to the millions struggling against austerity – especially those hailing from the Indignados occupations movement – the traditional left and the unions seemed more like a part of the system than a force leading the fight against it.

Podemos emerged as an alternative with an anti-austerity left agenda, and a programme to repudiate illegitimate debt and undo austerity. It employed much of the phraseology and demands of the Indignados’ and other social movements, and had no ‘baggage’ of having managed the system in the past, which made it attractive to a new generation.

Based around Pablo Iglesias and other left-wing academics, it emphasised the existence of ‘la casta’ — a corrupt political caste of capitalist politicians. This tapped into a mass mood of rejection of politicians, which was expressed by the Indignados in an anti-party mood. Podemos claimed to represent the entry of ‘the people’ into politics, over the heads of the discredited politicians.

Its leaders put it forward not as a party in the traditional sense, but a ‘participative space’ through which the people of Spain can get their political voice heard as a whole. Its main organisational foundation is not a network of branches or rank-and-file committees, but the ‘citizen’s assembly’ open to all Spanish citizens which elects the leadership of Podemos through open primaries on the internet. In the future it will vote in online consultations on some important policy questions. More than 300,000 people have signed up to participate.

This means that “Podemos is the people” according to its leaders. However, there are some contradictions. Are there not people who, instead of wanting to end austerity, support it? There are certainly people who benefit from it – the big bankers and shareholders to who the odious public debt is paid, for example.

It is a crucial necessity for the anti-austerity movement to understand that the people needing a political voice are working people, the unemployed, youth, pensioners, etc. In other words, the wider working class whose interests are up against those of another ‘people’ – the super-rich capitalist class.

Also, for socialists, involving working class people in politics means getting them active in democratic structures which discuss, debate and decide on the policy and strategy of the movement. This means more than simply an occasional click in an online election or referendum.

Podemos does have hundreds of ‘circles’, or branches, around the country but these have only a token role in its functioning. The absence of mass circles in neighbourhoods and workplaces which serve as building blocks of Podemos means that in practice it operates in a very top-down manner. It has a narrow leadership – based around general secretary Iglesias – which decides on everything.

This way of operating, though cloaked in democratic phraseology, assigns a passive role to the mass of people, and is an obstacle to the building of a really mass democratic political force for the Spanish working class.

Tens of thousands turned out on the streets for the ‘march for change’ only to be sent home afterwards and told to vote for Podemos when the time comes! Such a mobilisation should have served as a starting point for a sustained mass movement of protests and strikes to bring down the government and end austerity. A potential electoral victory would be one part of this.

This is not an academic question, given the clash with big business and the Troika that the necessary measures would provoke (as shown by Greece). Any left government can only apply the policies which it can also defend in the streets and workplaces. The mobilisation and self-organisation of working people is valuable preparation for such an eventuality.

Podemos’ leaders, in a way mirroring those of Syriza, have also moved towards the right as their support has grown. Podemos’ initial programme was a radical left-wing one, which promised a universal decent income for all, the right to housing and the nationalisation of the strategic sectors of the economy. However, in recent months its leaders have moderated their rhetoric, dropping key promises such as a retirement age of 60, and the non-payment of the debt, in the name of ‘realism’ and an international ‘context’ which makes such plans impossible.

It is true that there is a ‘context’ which acts against the measures necessary to end the misery of workers. This context is the continued domination of the multi-national companies and bankers, whose markets and institutions (both national and European) will work against any government which tries to govern in favour of the people. However, instead of accepting this and adapting the programme to what is possible within it, the mass movements of the working class against austerity need to fight to transform this context!

Only the organisation and mobilisation of the working class and a left government with a revolutionary socialist policy to replace the dictatorship of the markets with workers’ democracy based on public democratic ownership of wealth can face up to this task. Such a government could link up with the working class of Greece, Ireland, Portugal and the whole of Europe and build a socialist federation from the ashes of the capitalist EU.

Socialismo Revolucionario, the Socialist Party’s sister organisation in Spain, fights to organise a revolutionary pole of the left, workers’ and social movements around the defence of such a strategy.