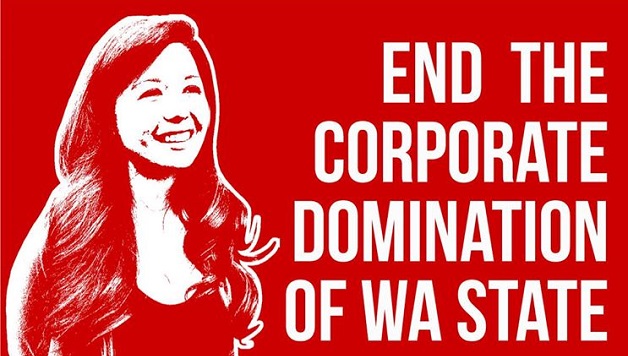 Socialist Alternative’s Jess Spear is standing in Seattle’ 43rd District for State House. Her opponent, House Speaker Frank Chopp, has presided over huge cuts in public services, including criminally underfunding education, while finding $9 billion to give to Boeing in tax breaks. Jess’ campaign has pushed rip-off rents to the fore, and campaigned to tax the rich to fund education, transit and clean energy.

The article below explains the impact that a socialist can have in office, and the growing support for a political alternative. 43rd District voters have until Tuesday at 4pm to mail in their ballot – and everyone can still get involved in the last few days of campaigning, and donate!

“Poll shows Sawant polarizing, but with impressive favorable rating” is the title under which a confirmation of the politics of Kshama Sawant and her organization, Socialist Alternative, was published. The poll, carried out by media research company EMT, reveals that people in Seattle know that Kshama Sawant is responsible for providing an opposition to the Mayor’s policies inside City Hall.

Kshama led the campaign that won a $15 an hour minimum wage in Seattle and has continued to campaign for working class policies – exactly what she promised to do in her election campaign a year ago.

In her district, Kshama achieved the highest approval figures compared to all the other council members in theirs – 61%. This is a huge encouragement to continue the efforts to challenge the big business agenda of the Democratic Party establishment which has dominated the city for far too long.

The latest success of Kshama’s efforts in the city council is the renaming of the national holiday Columbus Day in Seattle to Indigenous People’s Day. Kshama received national attention with this. She explained: this “is about more than just a name change. It is about educating ourselves and our children, about taking a stand against racism and discrimination.”

Every budget season is interrupted for the majority of the council to join a retreat in a luxury resort hosted by the chamber of commerce. “What a brazen display of corporate favoritism”, Kshama Sawant argued at a press conference. “It is no wonder that the budget, year after year is completely out of touch with the economic problems faced by ordinary working people.” Again she received a wave of media attention for this principled stand.

At the same time, one of the most powerful politicians in Seattle, state speaker Frank Chopp, is forced into a battle for support of voters in the 43rd District. On 4 November an election will take place where Jess Spear and Socialist Alternative are again taking on the Democratic Party machine and their big business agenda.

Funded by an army of corporate donors, and backed by the Democratic Party establishment, Chopp has been able to out-spend Jess Spear three times over. However, in the face-to-face debates (which the 20 year long incumbent carefully tried to minimize and shorten) Jess exposed him as the ‘corporate servant’ that he is. After one of the debates, local media reported Jess as “by far the most impassioned speaker of the day. She answered the moderators’ questions, but went further than any other candidate, bluntly calling for more taxes on the wealthy and on Boeing.”

In the middle of the campaign, the Washington State Supreme Court held that the state legislator has been criminally underfunding education. Pointing to the $8.7 billion handout for Boeing bosses while Boeing shifted thousands of jobs out of the state, Jess Spear was quoted in the Seattle Times: “It was noteworthy that the state legislature argued that it was easier to pass a tax handout rather than fund education.”

This quote was then curiously removed from the article on the website. “This really shows the importance of independent media sources – media outlets that are controlled by working people in the service of working people, rather than relying on media that’s owned and controlled by big business and can shut out voices that are important to the discussion,” concluded Jess, a subscriber and writer for the paper Socialist Alternative.

Against this wave of money and media power, door knocking and direct conversations are crucial. More than 300 volunteers are helping talk to people in their neighborhoods, putting up posters and handing out leaflets.

During the campaign, Jess – a climate scientist – brought together a coalition of environmental and labor organizations to coordinate the People’s Climate March in Seattle on September 21st, the same day as the historic march in New York. This protest demanded jobs and protection of the environment – and ended in blocking the tracks used for oil and gas trains for two hours in an act of civil disobedience.

The yard signs of the campaign for Jess demand “Tax the rich – fund education” and “We need rent control”. After the victory of the 15Now campaign (of which Jess was the organizing director) in winning a $15 an hour minimum wage in Seattle, the question of affordable housing is now the most pressing issue in the emerald city.

Through the successes of mobilizing 2,000 for climate action, having thousands of conversations on door steps about rent control, and mass flyering to demand taxing the rich, Socialist Alternative’s roots in the Northwest have deepened. We are growing in Seattle and nationwide. Future campaigns can build on the experiences and successes of a marvelous effort to chop Chopp.

For a full balance of the campaign and a detailed review of the election results after November 4th, go to www.votespear.org or www.socialistalternative.org