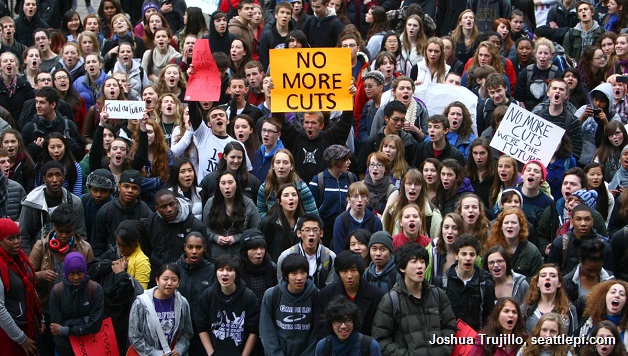 On Thursday October 23, Garfield High School students in Seattle responded to the news that the school would be immediately cutting one full-time teacher in order to save money. At 1:50pm, hundreds of students walked out of class. They carried signs saying “Which 150 students will be teacherless?” Even the school marching band joined in, giving a musical background to this moment.

A similar story of devastating cuts has been told across the state for years. What makes Garfield High School (GHS) different? GHS has a history of struggle and resistance, so when the cuts come to their door, they stand up and fight back.

They highlight what for so many other high schools is a silent story – teachers being cut, supplies lacking, and students suffering. But at GHS, the students were far from silent. They had speakers from both the school and broader community. The students erupted in chants of “Let us graduate!” They understood that teacher layoffs would prevent some seniors from graduating on time.

It’s so inspiring to see these brave students getting organized and protesting, most for the first time, against these criminal cuts to education coming down from Olympia. I’m proud to be running a grassroots campaign that takes their demands for no cuts to the state level. By taxing corporations and the super-rich, we can reverse this long trend of decline and start expanding resources for schools beyond the basic requirements of the Supreme Court. We can start by rescinding the $9 billion Boeing handout.

This devastation of schools is what prompted the Supreme Court of Washington State in 2012 to rule that the legislature in Olympia was criminally underfunding education and demanding that immediate action be taken.

The legislature responded by continuing to underfund education, giving earmarked tax money instead to Boeing executives when they threatened to cut jobs. The result: Boeing cut jobs anyway and schools across the state were told they had to make cuts to deal with the shortfall. Last September, the Supreme Court of Washington State held our legislature in contempt of court for the first time in state history.

This is a good starting point, but it does not go far enough. As a result, the Democratic majority in Olympia have made their plan clear – fund schools at the cost of all other social services. The political logic in Olympia is ensuring that the wealthy keep getting wealthier while everyone else suffers.

Any politician that put the interests of working people first would end the billions in handouts would end the $6.5 billion in handouts that Washington State gives to profitable corporations every year. This revenue alone would generate enough money to fund fully schools with enough left over to finance adequately other services which have already been cut by over $10 billion. But ending corporate handouts is not on the Democratic majority’s table in Olympia, nor is it advocating for a progressive income tax to replace the obscenely regressive state sales tax.

While corporate politicians continue with the most unfair tax system in the US, cuts to necessary programs are inevitable. What we see on a city and a state level are social services competing for crumbs with never enough to go around while the wealthy are enjoying record profits.

This is why Washington is one of three states where poverty is rising. High schools like GHS and the communities that depend on them are expected to bear the burden of these policies that benefit the wealthy and punish the working class. Luckily for all of us, brave working-class people like the students at Garfield are not taking it silently. This is how change happens. We must follow their example and build a movement against these horrific cuts and tax the rich to fund the services that we need for our communities to prosper.​