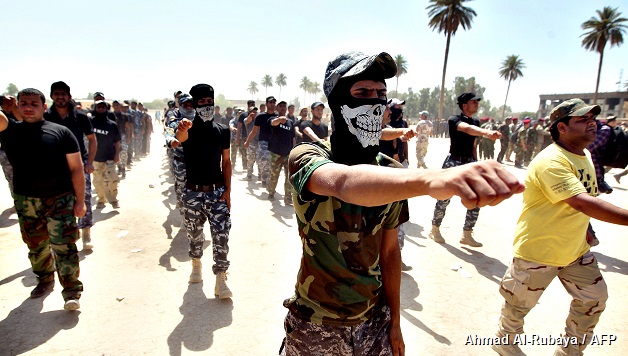 Only Working People Can Defeat Terror and Oppression

Another war with U.S. involvement has started in the Middle East. Obama is the fourth president in a row to bomb Iraq. This is not an intervention to help ordinary people but rather to defend the interests of U.S. corporations in a geostrategic region full of oil resources.

Every U.S. intervention has created new terror and reactionary forces on the ground. Even the “Islamic State” (IS or ISIS) is a product of imperialist intervention (as for example the Taliban or Saddam Hussein before).

The so called war against the atrocities of the IS – and these are truly horrible acts – is conducted with allies like Saudi Arabia, itself a reactionary fundamentalist, undemocratic regime that beheads people, brutally oppresses women and follows its own agenda in the region.

Solidarity With the Fight for Kobane

Facing the threat of extermination by the reactionary IS forces in Kobane, the Kurdish population there is waging a courageous and desperate battle for survival. Yet at the time of writing, it appears possible Kurdish militias in Kobane,currently supported by U.S. air strikes and weapon supplies, will turn back the IS offensive. The willingness of the Kurdish forces to come to the aid of other ethnic and religious minorities threatened by IS and the prominent role of women fighters in their forces, have inspired the Kurdish diaspora and millions more across the world.

If successful, the stunning turnaround in Kobane will only underline the need for a united and mobilized movement from below to permanently defeat IS. Imperialism’s wider strategy of relying on air power, the demoralized Iraqi military, and support from the hated and corrupt regimes in the region, will fail.

Imperialist intervention is only serving to worsen the catastrophe. The origins of the current slaughter can be found in the legacy of  previous interventions. While working to defeat IS, the U.S. government is also looking to defend and strengthen U.S. corporate interests in the region. No trust can be placed in the Sunni or Shia elite and rulers in the region, which are being drawn into the conflict and seeking to use it for their own ends.

IS forces may now try to launch a further offensive to take the Sunni western part of Baghdad. Anbar province was at the centre of the Sunni uprising against the U.S. occupation in 2003. The real reason for the rapid advances of IS in Iraq and Syria is that it fueling a generalized Sunni uprising.

Shia militias, supported by the Shia-dominated Iraqi government, have made some advances against IS north and north-east of Baghdad. But the militias’ brutal response has not distinguished between IS fighters and ordinary Sunni people. This helps drive more of the Sunni population under the umbrella of the IS, as many do not see any other force to “defend” them. The IS forces have been able to base themselves on the oppression dealt out against the Sunni population under the western-installed Iraqi government of Maliki.

For a United Movement

Defeating IS and all other right-wing sectarian forces in the region will require building a united movement of the Sunni and Shia Arab masses together with the Kurdish, Turkish, and all other peoples. The immediate task is to establish non-sectarian democratic committees and militias to defend populations against the IS and other sectarian forces. Such bodies can be the basis for building an independent movement of working people and the poor to combat oppression, capitalism and imperialism. A voluntary and equal socialist federation of states would guarantee the democratic, national and ethnic rights of all peoples of the region.