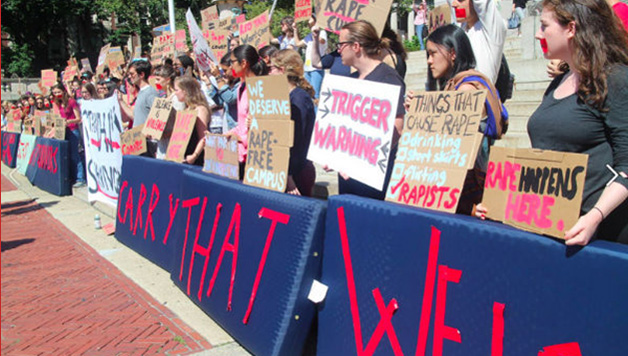 Growing Resistance to Violence Against Women

There is a noticeable shift in the country. Women are increasingly refusing to accept violence directed against them. The protests against sexual assault at Columbia University, the huge outcry against the NFL’s failure to address domestic violence, the #YesAllWomen Twitter storm, the reproductive rights filibuster in Texas, and the “Slutwalks” are all examples of a growing determination to resist violence against women.

As a result of increasing campus activism, colleges in particular are being forced to confront the rampant prevalence of sexual violence that students face while pursuing higher education. Sexual violence remains endemic in our society, and college campuses are no exception, including some of America’s most prestigious institutions. For instance, Harvard University had over 100 cases of sexual assault reported within the last three years.

While it is estimated that only 5% of college rape survivors report their experience to law enforcement, 1 in 4 women experience rape or attempted rape at some point during their college careers (The Campus Sexual Assault (CSA) Study, prepared for the National Institute of Justice, 2007).

Due to mounting pressure from students and activists, the White House is being forced for the second time in three years to address the reality of how common rape and sexual assault are on campuses. In January, Barack Obama outlined plans to develop a “White House Task Force to Protect Students from Sexual Assault.” The question many are asking is, will this be enough to permanently eradicate sexual violence on college campuses?

This past spring, the U.S. Department of Education released the names of 77 schools that are currently under investigation for their mishandling of rape and sexual assault cases. The list of colleges stretches from coast to coast, including Harvard, UC Berkeley, Florida State, Yale, and Princeton, just to name a few. Many have been found guilty of blatantly falsifying their records of campus assault in order to avoid negative attention so they can raise funds from alumni and wealthy donors and avoid losing Title IX funding. This often leaves students in the dark about the risks of their schools. And when students report complaints about rape or sexual assault, they often face an unresponsive bureaucracy. For example, Columbia University student Emma Sulkowicz alleges she was raped in her dorm room. She eventually reported the incident to university officials, but the university ultimately dismissed the case. So Emma recently began lugging her mattress around campus until her rapist is held accountable. More students have been joining in carrying mattresses around campus. Building a mass movement of visible protests like these, or better yet, even larger protests, can pressure college administrators to take this issue seriously.

Together, we need to demand real community intervention that provides effective monitoring and rehabilitation. Clear and concise education, training, and awareness programs should be mandatory for all students and staff. We also need to overhaul the legal system, which currently handles sexual offenders and victims with gross ineptitude and neglect. To truly address violence against women, we need to go further and tackle the root cause of women’s oppression. Sexual assault is the inevitable by-product of a sexist, capitalist society based on inequality, exploitation, and domination – a profit-driven society in which women are reduced to mere sex objects a thousand times a day in the media and men are taught to compete for wealth, power, and masculinity.

Ultimately, we need to establish a democratic socialist society based on equality and cooperation so that the systemic exploitation, oppression, and inequality inherent in capitalism will no longer distort human relationships and the world would be a much safer place for women.